The Bad Times: Yes, famine is no fun 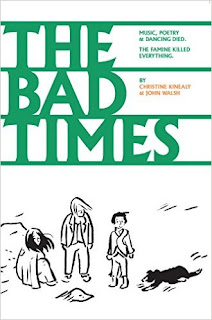 It’s often not very fun to be negative about a book that’s well-meaning, and this one is about as well-meaning as they come. It’s about the Irish Famine that took place between 1846 and 1849, and it tries hard to be authentic and educational. Unfortunately, it’s just not very good, with broadly-drawn characters that don’t seem very much like real people, plotting and dialogue that is descriptive without providing much in the way of relatability, and rudimentary artwork that doesn’t really capture the tragedy of the events.

You know you’re in for trouble when the book starts with a text introduction that explains who the main characters are and how they relate to each other, rather than trusting the story itself to reveal this organically. We do get something of a feel for the three teenaged leads as the famine slowly sets in and their families begin to suffer, and the approaching dread as their families worry about how they’re going to be able to survive is fairly effective. But much of it is pretty ham-fisted, with characters stating their feelings explicitly, breaking the “show, don’t tell” rule often.

What’s more, sometimes it’s hard to tell exactly what is going on, as in this scene, when one of the teens wakes up and goes outside to find that disease has struck his neighbors: 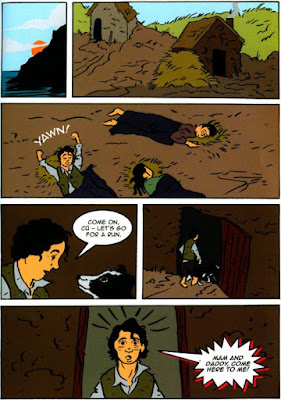 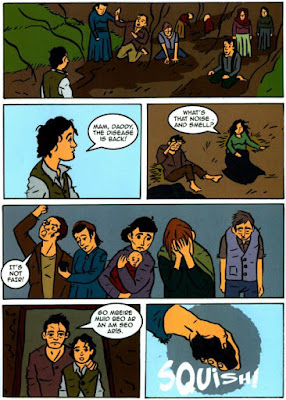 At least, I think that’s what’s supposed to be happening there. Are the townspeople just hanging out in the street and wailing at their misfortune? It’s not very clear.

Those pages also give an example of the regular use of the Irish language, which requires readers to regularly flip to the glossary in the back of the book to understand what people are saying. It’s meant to add authenticity, but it ends up just being cumbersome. This is also true of occasional references to events or political figures, such as the Irish nationalist leader Daniel O’Connell, which are often mentioned with little explanation. While this sort of thing might be meant to encourage readers to learn more, it doesn’t make for a very satisfying read.

The book isn’t total ineffective; there are some scenes of real tragedy, with things getting worse and worse for everyone as the characters’ families begin to be unable to find work, get forced out of their homes, and slowly starve and die. But there’s little in the way of nuance, with people either being good and generous or evil and greedy. The villains of the book might as well twirl their moustaches as they oppress the poor and starving populace:

Overall, it’s not a worthless book; there’s something to be said for depicting tragic history in an unflinching manner. But while this book does do that, it doesn’t make the characters compelling enough to really feel that tragedy, and it doesn’t fill in the details well enough to help readers get a full understanding of the events. Good intentions mean something, but they’re not enough to actually create a quality product.
Posted by Unknown at 4:03 PM