The Art of Charlie Chan Hock Chye: Comics will break your heart, and so will Singaporean politics 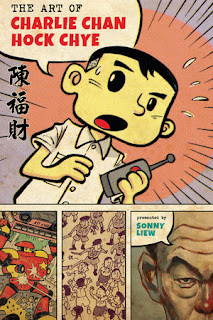 Sonny Liew has always been an excellent cartoonist, but with this book, he really takes things to the next level, both in terms of artistic style and in the depth of his writing, as well as his ability to use the comics form to create something truly unique. Here, he "presents" the story of the title character, a fictional cartoonist from Singapore, and the book functions as a collection of that man's work, including the various comics he created throughout the twentieth century, excerpts from his sketchbooks, illustrations he made, and an autobiographical comic that gives context to his work. In addition to all of this, Liew adds documentary-style comics that show Chan in the present, and even occasionally adds himself as a character to explain things to the reader. It's a fascinating collection of techniques, and it's convincing enough that one occasionally wonders if Chan was a real person.

But no, it's all fiction, and that's probably for the best, since Chan's story isn't a very happy one. Like many creators throughout the history of comics, he had a hard time, slaving away at his art for decades without receiving much in the way of acclaim or success, yet feeling like he couldn't give up. It's a portrait of the artist as somebody who has something to say, even if nobody is listening.

And what he does have to say is where things get really interesting, since it gives Liew a chance to study the history of Singapore, from its status as a British colony, to its occupation by Japan in World War II, to its struggles to achieve independence, to its brief merger with Malaya, to its eventual status as an independent nation ruled by a near-dictatorial regime. As the book progresses, we see Chan use his comics to address current events and support the people he saw as leaders in his nation's struggle for justice, only to become disillusioned as infighting between these leaders led to power struggles and new versions of oppression. The book functions as something of a history lesson, and it's rather educational, providing insight into the changes that Singapore went through over the decades.

That all sounds kind of dry, but Liew makes it sing by having Chan take inspiration from a variety of sources. He starts out as an imitator of Osamu Tezuka, with a comic about a boy who discovers a giant robot and uses it to defend student protestors who are being beaten by British authorities: 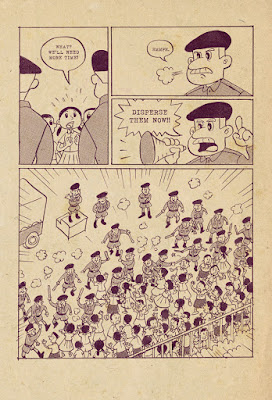 Later, he imitates the EC war comics of Harvey Kurtzman to look at how Singapore was caught in the middle between the Axis and Allies during World War II and its aftermath: 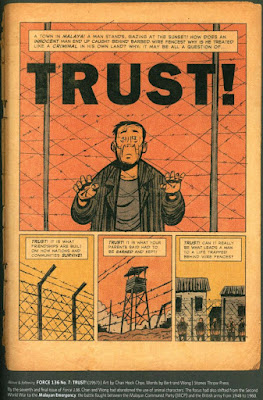 Then, he gets inspiration from the British comic Dan Dare, Pilot of the Future to create a sci-fi story about Earth struggling to get out from under the thumb of alien rulers: 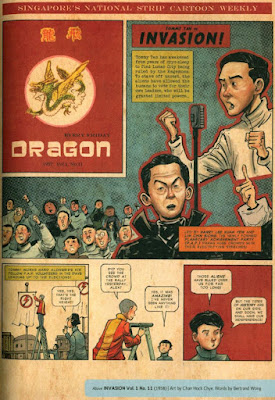 He follows that with a Pogo-style allegorical funny animal strip that satirizes Singapore's merger with Malaya and its political fallout: 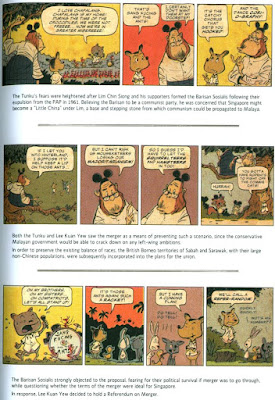 He goes the superhero route with Roachman, a vigilante who helps people deal with injustices in a changing Singapore: 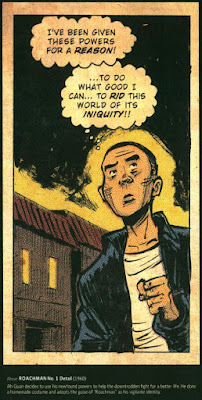 He creates a Mad Magazine-style satire of Singapore's "official" history, in which the ruling party pats themselves on the back, insists that everything they've done is for the good of the people, and papers over any injustices they've committed: 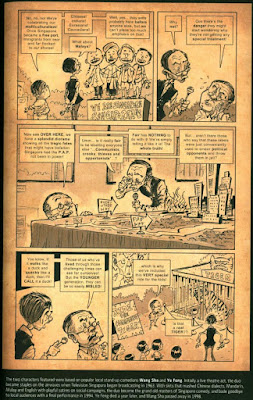 And perhaps most fascinatingly, he takes inspiration from both Frank Miller and Philip K. Dick's The Man in the High Castle to present an alternate history of Singapore in which a different party came into rule, but things seemed to end up much the same: 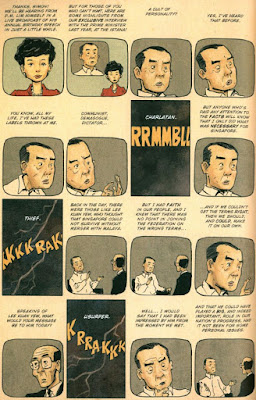 It's a pretty amazing collection of styles, and it makes for a great way to guide readers through the history of a country that they are most likely not familiar with. Interestingly, Liew sort of sets Chan up to fail by having him insert didactic commentary into his comics, turning them into political treatises rather than can't-miss entertainment. His sci-fi story about alien oppression ends up being an examination of real-world political figures and their struggles. His version of Pogo is so full of impenetrable allegory that Liew has to appear alongside the strips to explain what they mean. It ends up being a demonstration of how an artist's passion to make a statement dooms him to failure and obscurity.

But that seems to be by design. Liew is sympathetic to Chan and his struggle to have his voice heard, but he doesn't turn him into a history-changing genius. Instead, he's an obscurity, a minor figure that provides Liew with a chance to examine the history of his own country and explore how idealism can so easily turn into oppression. It's a fascinating work that demonstrates Liew's mastery of the comics form, and it's one that has a great deal of value, both in helping to understand the history of Singapore and in examining the benefits and drawbacks of the artistic lifestyle. If that sounds like something you would be interested in, don't miss it.
Posted by Unknown at 2:41 PM