Two Brothers
By Fabio Moon and Gabriel Ba
Based on the novel The Brothers, by Milton Hatoum
Published by Dark Horse Comics 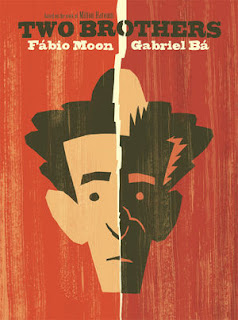 Comics don't get much more "literary" than this, do they? Of course, this book borrows its pedigree somewhat from the source material, a novel by the Brazilian author Milton Hatoum, but it's kind of an outlier in American comics, focusing on the sort of material you usually get in novels by somebody like Jonathan Franzen: the history of a family and their internal conflicts over a few decades, with lots of symbolism and a bit of historical import. And that's cool; comics can always use more in the way of literature for adults.

Luckily, with two great creators like Fabio Moon and Gabriel Ba on board (there's no indication who drew what, although most of the character art looks like Ba's work to me), this is still a pretty great read, even though its origins are pretty clear from the ever-present narration. But while much of the plot and internal emotions of the characters are relayed through text, Moon and Ba use the art to bring it all to life quite beautifully, creating a wonderful sense of place in the small Brazilian town of Manaus.

So, the plot: interestingly, while it centers around the eponymous brothers, Yaqub and Omar, a pair of twins born to a Lebanese family, the two of them aren't really the main characters, or at least they're the ones about whom we're not as privy to their internal states. Instead, we see them through the eyes of the rest of the family, especially their father, Halim, as well as the book's narrator, who isn't revealed as a servant boy who lives in the household until several chapters in.

If you couldn't tell from the cover image, there's a rift between the brothers, with the more studious Yaqub spending a good portion of his childhood in Lebanon after Omar attacked him and scarred his face in a fight over a girl. On Yaqub's return, the two of them are quickly at odds, but not overtly. As their mother's favorite, Omar ends up being a no-good playboy and layabout, and Yaqub commits to his studies, eventually leaving home again and moving to São Paulo to become a successful businessman, but never letting go of his antipathy toward his brother.

And so things proceed, with grudges and emotions simmering over years, Halim (who, as we learn in a chapter that flashes back to his and his wife's early relationship, never really wanted children) getting more and more angry at how his sons turned out, his wife Zana focusing more and more on lavishing attention on Omar while he wastes his life on alcohol and loose women, and the narrator trying to understand how he fits into all of this (he believes that one of the twins is his father, but his mother, a native Brazilian servant who grew up working in the family's home, won't confirm or deny his suspicions).

And through it all, we see the city change as it grows from a seaport (riverport?) focused on fishing and shipping into something more modern, with industry supplanting poor people's homes and starting to squash the more creative parts of the culture. Some later chapters are focused on student movements that get cracked down on by the authorities, and this probably has more relevance to Brazilians who understand exactly what events are being referenced here, but it's still evocative of the changes to world culture that took place in the twentieth century.

And, well, that's about it. There aren't any earth-shattering moments of personal discovery or dramatic revelations that undercut what happened earlier; it's just the story of a family that tore itself apart across several decades while their country changed around them. It's sad, but that's literary fiction for you.

It's still a beautiful book though, with Moon and Ba bringing Hatoum's imagery to life in ways that make the setting feel incredibly tangible, whether they're depicting the vibrant Amazonian foliage that seems to burst with life and color even in black and white: 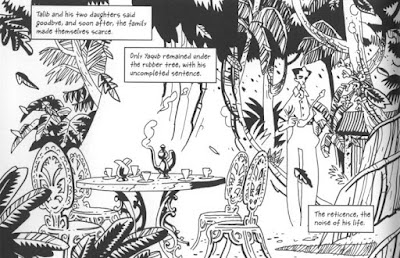 Or the bustling activity of the town's port:

While the narrative text drives much of the book's plot, Moon and Ba don't rely on it to tell their story; they're happy to use wordless sequences to provide a much more visceral sense of action and emotion when it's called for, as they do in a scene in which the narrator's mother takes him on a boat trip up the Amazon to visit her home village, and they get caught in a storm on the way home: 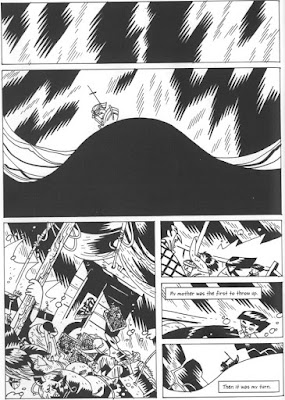 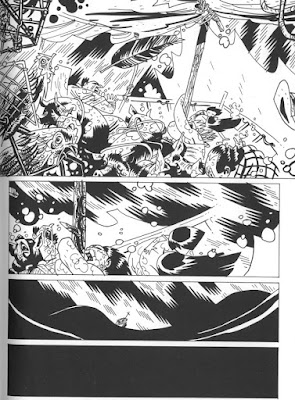 There's another excellent sequence late in the book in which the narrator has a sort of panic attack related to some of the violence that he witnessed: 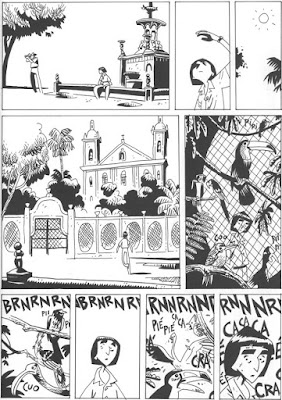 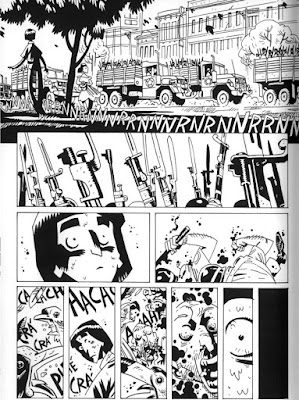 These are just a couple of the examples of great comics storytelling that Moon and Ba deliver here; they're certainly not just illustrating a text story, but using the medium to its full extent. I really do wish we had more comics like this in the United States, but until we do, this is one of the ones that can sit on shelves alongside all of the literary award winners. It's that good.
Posted by Unknown at 8:13 PM