The Kitchen: Another nail in the Vertigo coffin 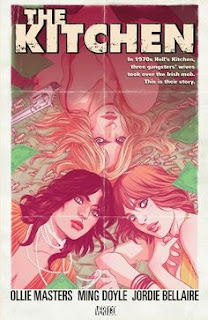 Remember when the Vertigo label on a comic book used to mean something? It's not that every comic released by DC's mature readers imprint was great, but there was a certain level of quality to be expected. And there were many pretty great comics, from the early days of Sandman, Swamp Thing, Hellblazer, and Shade the Changing Man, through to 100 Bullets, Transmetropolitan, Y: The Last Man, and Fables. But these days, the imprint seems to be a victim of the continuing terrible management decisions made by DC (including the recent kerfuffle surrounding the firing of longtime Vertigo editor Shelly Bond), and if you want an example of how far Vertigo has fallen, The Kitchen is a perfect example.

The premise behind this series seems solid: in New York in the 1970s, three members of the Irish mob get sent to jail, and their wives end up taking over their business dealings, which leads to lots of power struggles and violence. It would probably make for a decent movie (although more of a middling crime drama than a prestige picture), but in this form, the story just kind of sits there on the page, without being very engaging or making the characters and their motivations compelling.

So: there's Kath, who starts out as the ringleader that convinces the other two women to take up their husbands' business while they're indisposed, mostly as a way to make ends meet for their families (although I think Kath is the only one with children, and they remain pretty much unseen until they play into a climactic moment between her and her husband, so there's not really anything in the way of stakes to get the reader on board for why they need to do this). Raven, Kath's sister, is initially hesitant, but somewhere down the line she turns ruthless and violent, a character arc that happens without much in the way of motivation. As the third member of the crew, Angie starts out kind of scared, but she quickly becomes enamored with the lifestyle and seems to revel in the violence.

As the plot proceeds, it takes all the turns you would expect: meetings with more established mafia figures, deals struck in order to solidify power, assassinations of rival gang members, and so on. When the husbands are unexpectedly released from prison (for no real reason other than dramatic purposes), this kicks off a war as the wives fight to keep their hard-gotten gains from being taken away from them. This is supposed to be the moment of actualization, in which they are faced with the choice of going back to their old lives as housewives or continuing down the path that they have forged as independent women (while the book is set in the 70s, the era of Women's Lib, there's little acknowledgement of the politics of the era; the time period is really just an excuse for costuming choices). Instead, it seems like they're going through the motions; there has to be a big enemy to face in order to have a dramatic climax, and while the series does throw in some late flashbacks in an attempt to flesh out the women's relationships with their husbands, it's too little, too late in the way of character development.

So there's little to speak of in the way of plot or character, but gangster stories are all about style, so if the execution is good, sometimes shakiness in other areas can be forgiven. However, as much as I think Ming Doyle is a pretty good artist, either this type of story is not her forte, or she was too rushed to turn in work that added much to the series. While much of the art is fine, with fairly realistic body language and facial expressions, there are many bits of awkwardness that draw attention away from the impact of the story and leave the reader with the feeling of watching mannequins trying to mimic human actions and failing. This includes characters that don't seem to be able to drink from glasses correctly: 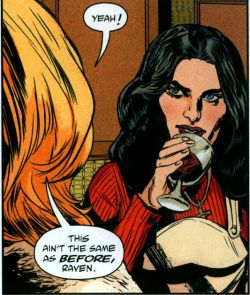 Doors being kicked in with oddly stiff legs:

Punches that look like hands being awkwardly thrust into people's faces:

A sex scene in which the characters' legs don't seem to follow any recognizable human anatomy:

And all manner of choreography that doen't make sense, like this bit in which a guy is apparently backhanding Kath with his left hand while somehow bruising her right eye: 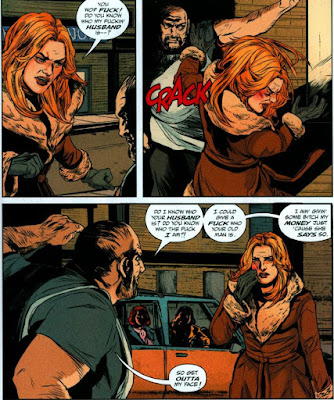 Doyle also seems to struggle with guns, which often don't seem to fit into characters' hands very well. Here's a bit in which a character shoots her lover, and she apparently manages to hook her hand through her purse's handle, pull out the gun, shoot it, and then remove her finger from the trigger between panels: 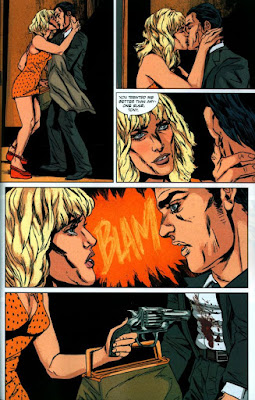 And here's another odd moment, in which I think what's supposed to be happening is that the man is being hesitant about shooting the woman, so she takes the gun away from him, but it comes off more like the gun just jumps from one person to another between panels: 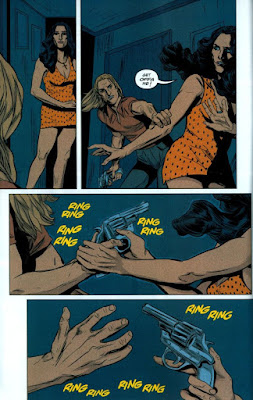 If the man is supposed to be hesitant, his forceful manner in the second panel seems to go against that idea, leaving any hesitation to be (poorly) demonstrated by the depiction of his hands in the third panel. Or maybe he was surprised when the phone started ringing, giving her the chance to grab the gun? If that's the case, the blase sound effects don't help; they don't seem like a jarring, distracting interruption. Instead of a loud "BRRRRIIINNGGG!" it's almost like someone is standing off-panel and saying the words "ring ring".

The book is full of strange moments like this, little continuity errors like a guy who in one panel has a gag over his mouth but doesn't in the next, or characters that are much too easy to confuse with each other (in one bit involving a truck heist, I was sure that a character that was hiding in the truck was the mob boss that had hired the women, but that apparently wasn't the case). The dialogue is often poorly edited too, full of phrases come off as stilted rather than realistic like "Stay the fuck out've this, lady!" (why make "out've" a contraction, since the character is saying "out of" rather than "out have"? Wouldn't "outta" sound better?). And while I'm nitpicking, why is the image on the book's cover made to appear as if it has been creased? Is it supposed to be a magazine pinup that the characters posed for that somebody tore out and folded up to keep in their wallet?

It's this kind of poor quality control that seems indicative of a huge drop in Vertigo's fortunes. I can't believe somebody in the editing department looked at this book and said, "Yes, this is exactly what we want to publish." I don't think this was ever going to be a great series, but its failures on nearly every level, from plot, to characterization, to art, to basic copy editing, are kind of astounding when coming from an imprint that used to be synonymous with a certain level of quality. With this pointless dreck, I think I can officially say that those days are over.
Posted by Unknown at 8:24 PM