I Hate Fairyland, Volume 1: Madly Ever After
By Skottie Young
Published by Image Comics 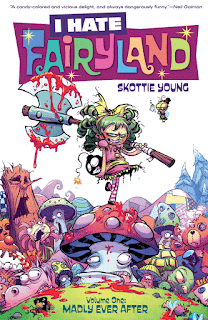 Skottie Young is one hell of a talented cartoonist, able to bring a liveliness to his characters and settings that make his images really enjoyable to look at. While he usually works in a cute, expressive style that's fun and kid-friendly (as evidenced by his regular "baby variant" covers for Marvel or his work adapting the Oz books), it seems like he might have gotten tired of the kiddie stuff and wanted to unleash his id, and I Hate Fairyland is the result.

With this creator-owned series, Young still works in a cutesy style, but he twists it into an exuberant nastiness, telling the story of Gertrude, a little girl who gets transported to a magical kingdom and sent on a journey to retrieve a key that will allow her to go home, but instead of a quick, exciting adventure, her quest drags on for 27 years. When we join her after all this time, she's a jaded, profane, hard-edged force of nature, rampaging through this magical world in her ever-futile search for her magical MacGuffin, but still stuck in the body of a six year old.

That setup gives Young a chance to just go nuts with violence and come up with all sorts of crazy variations on this type of portal fantasy story, filling the world with weird creatures and landscapes, and then having Gertrude destroy them in ever more inspired ways. His cartoony expressiveness goes so over the top that it becomes grotesque, and each new issue of the series gives him a chance to see how far he can go. If Gertrude faces some sort of barbarian character, it's not enough to give him one or two giant battle-axes; he needs 10 huge weapons strapped to his back. If Gertrude gets maimed in a fight, she doesn't just have a black eye, she looks like she's been run over by a steamroller (luckily, by Fairyland rules, she's able to shrug off most any bodily harm). It's pretty hilarious to see what sort of craziness Young will come up with next, and since he's obviously having so much fun, the reader can't help but go along for the ride. 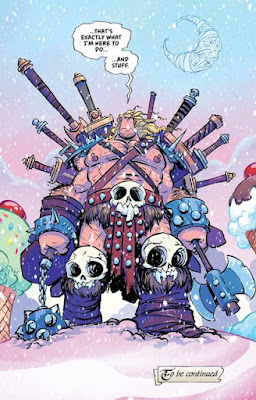 Young also works in plenty of good running gags, like the way Gertrude manages to kill a succession of cute narrator characters, or how her constant swearing is replaced by terms like "muffin fluffer" or "what the spell". And the driving plot of the book works well too; rather than just being a violent rampage through a magical world, he gives Gertrude obstacles to overcome and enemies to face, all leading up to a climactic conflict that's pretty satisfying while also setting up an interesting direction for future volumes. 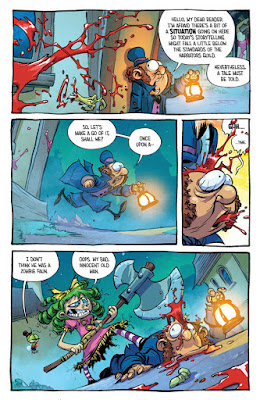 Overall, this comic ends up being highly enjoyable, if only because Young's exuberance is highly contagious. His funny, mean-spirited take on these familiar tropes is tons of fun, and it's a great way to exorcise demons and push back against the cutesiness of these types of stories. I'm excited to see where he goes next, and with the imagination that's on display here, I expect it will be great fun to accompany him on his continuing journey.
Posted by Unknown at 12:57 PM