Sacred Heart: The kids either are or aren't all right 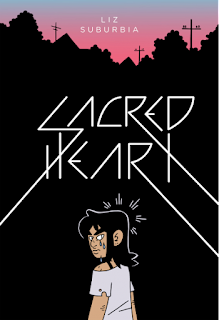 Is Liz Suburbia the next Jaime Hernandez? That may seem like a bold claim, but with this graphic novel, Suburbia cements herself as a great cartoonist who seems to be following in the path laid down by Love and Rockets, creating a believable sense of place and capturing her characters' emotional lives, while inserting just a bit of the fantastical. This book is an assured debut, and it sees Suburbia mature from a creator of interesting minicomics into a full-fledged talent that will hopefully be delivering quality comics for years to come.

This book follows the lives of several teenage characters in a small town, but it focuses mostly on a girl named Ben and her relationships with the kids around her. She has a platonic friendship with a boy named Otto that morphs into something else, but isn't necessarily a deeper connection. She also worries about her sister, Empathy, who she doesn't see as much as she would like, and she nurses a crush on a popular boy who seems to be out of her league in more ways than one.

As the book progresses, Suburbia mostly just lets us see Ben and the other kids' lives play out, and we watch as they fall into and out of relationships, worry about dumb stuff like who is going to which party, and congregate around the requisite local rock band. But there's something odd and kind of sinister going on under the surface: dead bodies keep showing up, and the kids seem oddly accustomed to this happening. Plus, it takes a while to realize this, but there don't seem to be any adults around. Is this taking place in modern-day America, or is it actually post-apocalyptic (possibly after the Rapture)?

Suburbia mostly leaves the answers to these questions ambiguous, which allows them to function symbolically, making teenage issues like fitting in, growing up, and forming adult relationships seem like the most important thing in the world, which is exactly how they feel to someone at that age. But she doesn't hit readers over the head with all of this, instead opting to leave things mostly unsaid and just let us watch as the kids live their lives and try to figure out their place in the world.

And that's where the book really shines. These characters all seem fully realized, acting like actual teenagers who are still figuring out who they are. Sometimes they're obnoxious and dumb, and other times they demonstrate real love for each other; in other words, they seem almost painfully real. And we don't just get this feeling about the main characters; Suburbia often creates montage scenes that check in with a number of kids in the community, demonstrating that each and every one of them is someone worth caring about: 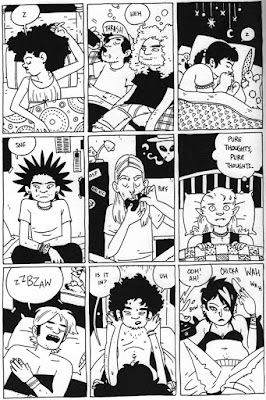 I especially like how this isn't just an exercise in teen angst or boredom (although the characters do spend time laying around and watching movies); Suburbia makes these kids' lives seem fun as they get excited about the next concert, party, or school dance. The kids drink alcohol and have sex and just goof around, enjoying the freedom that youth provides. The future may not be certain, and things get more uncertain and ominous as the book heads toward a close, but they'll enjoy their lives while they can, which seems like an appropriate outlook for the future in 2016.

I haven't talked much about the art here, but it's a key part of what makes everything work, from the relatable setting, to the body language, to the slightly surreal feeling that pervades throughout. One thing that I love is the way Suburbia depicts music, with the sound created by a rockin' band taking the form of blobs of energy emanating from the stage: 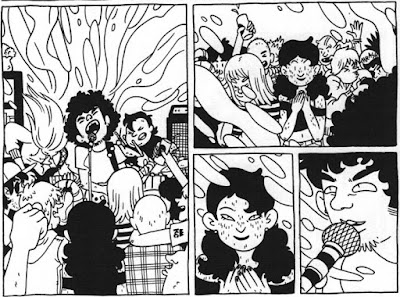 Everything in this book is just incredibly well done, creating a story and characters that are relatable while still remaining a bit off-putting, which, as an adult, is kind of how I view teenagers anyway. There's plenty here to marvel at, and Suburbia handles it all with such assurance that I can't help but feel that I'm seeing a cartoonist in complete control of their medium. If she's this good her first time out of the gate, I can't wait to see what she does next.
Posted by Unknown at 12:33 PM