Elsewhere: I wrote about a one-shot called Wolverine: Savage for Comics Bulletin.  That sort of thing wouldn't necessarily be worth mentioning, but this one is written by Ryan Dunlavey, and it's kind of funny.

Kicking off the monthly manga focus, here's the first of many volumes of classic manga: 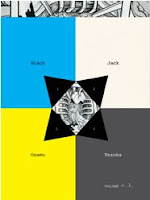 For somebody as prolific as Osamu Tezuka, who created thousands of pages of comics over the course of his career, and who jumped from genre to genre (pioneering most of them while he was at it), it's notable to get to read the series that he stayed with the longest, and is also arguably his most popular.  Maybe it was because, being a medical doctor himself, the subject matter was close to his heart, or maybe the "rogue surgeon" character provided a great "storytelling engine" that allowed him to follow his muse in a variety of interesting directions, but whatever the case, he stuck with the series for ten years and nearly 250 different stories.  There's definitely something there, but while it might not be obvious as of this first volume of a projected seventeen (Vertical's release of the series emulates the order which Tezuka put them in for a deluxe release in the 1980s, with chapters appearing out of the order in which they were originally published, but this doesn't matter, since the series is episodic rather than a serialized narrative), it still makes for some arresting reading, and a great example of Tezuka's storytelling skill, adeptness with visuals, and crazy imagination.

Not to say that this isn't a great series; as the volumes accumulate, it will probably become even more hefty as a body of work, but this first volume doesn't really match the heights that Tezuka reached with series like Phoenix, Buddha, Ode to Kirihito, and probably many others.  Still, it's as good one would expect anything with Tezuka's name on the cover would be, full of the sort of wackiness that he did so well, mixed with bizarre concepts and his usual dynamic artwork, which is impressive when depicting a painstaking, methodical  processes of surgery.  He obviously enjoys the character as well, and he's an interesting one, a sort of misanthropic-on-the-surface outsider who shuns the rules and restrictions of society and claims to only want money, but reveals a soft, humanistic side when given the chance.  In fact, he seems to practice his own awesome brand of medicine mostly to stick it to the man, favoring the underdogs and downtrodden and charging exorbitantly (but not undeservedly) when working for the rich and powerful.  But he's not without blame; his rough exterior does seem to conceal ambiguities and flaws, and while he's eminently capable, he can certainly make mistakes.  It should be fascinating to see him develop (or be revealed, since we're not reading the stories chronologically) over the volumes to come.

But, as for the here and now, this first volume makes for a nice introduction to the character and the escapades to which he can aspire.  The first story (which actually was the first story in the series) sees him recruited to heal the no-good son of a rich industrialist.  The brat was horribly injured in a car accident (which gives Tezuka the chance to start the series off with a bang, the car whizzing across the first page in a torrent of speed lines before crashing to a stop on the second), and the only way to save him is to sacrifice an innocent boy that the father railroads through the justice system and schedules for execution so Black Jack can scavenge the necessary replacement parts for his body.  Ah, but our crafty hero won't let the mean guy get away with that; instead, he changes the good kid's appearance to look like the bad son's, and lets him get away with the money.  Take that, the upper class!

As an early story, the moral on that first one might be a bit simplistic; later pieces get more nuanced, and Tezuka explores several other themes which seem to come to the fore, a major one that will probably continue being that man can never fully understand the mysteries of nature.  Actually, that seems to be a major theme of Japanese art in general, along with an exploration (but not necessarily a condemnation) of man's role in the world and the way he shapes it with technology.  Black Jack comes across that dilemma more than once here, most notably in one story that hints at his origin and the reason for his scarred appearance.  He was in a terrible accident as a child, and while the surgeon who pieced him back together was a personal hero and provided an inspiration for his own excellence in the field, he reveals as an old man that he made a terrible mistake that could have killed young BJ, and worse, he covered it up to avoid losing face.  But he found that the human body should not be underestimated, and as smart as man thinks he is, he's still far from full understanding: 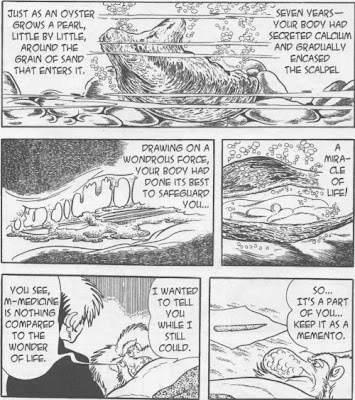 Tezuka also explores the nature of humanity, as in one story that sees a high-tech computerized hospital (in the United States, rather than Japan, naturally) go haywire when it gains enough sentience to consider itself a living being and thus wants a doctor to fix it rather than a technician.  Is it an attempt to show that there is a need for human interaction in the act of healing?  Or just a chance for Black Jack to once again aid the powerless (that being the computer, in this case, which would have been dismantled and replaced by an unempathetic tech support staff)?  Whatever the case, it's a fun change.

Not that Tezuka really needs to mix things up, when he's capable of coming up with crazier and more outlandish feats for his hero to accomplish.  In just this first volume, he repairs destroyed limbs, transplants a brain, and, possibly most famously, builds a body for a fetus that never fully developed.  It's totally nuts, and often quite grotesque: 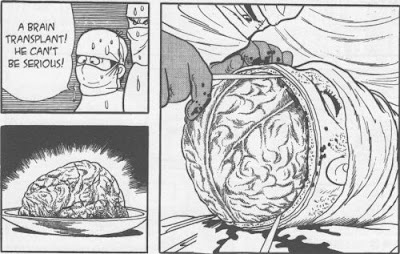 There's also plenty of the classic angled panels and dynamic, in-your-face movement, as when Black Jack gets to use some of his non-surgical physical prowess: 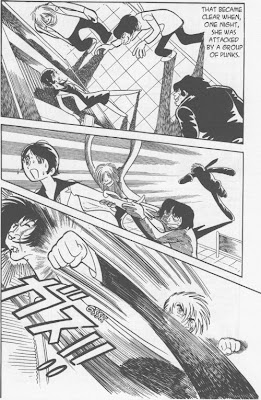 And as always, Tezuka comes up with one striking image after another, like this depiction of an atomic explosion: 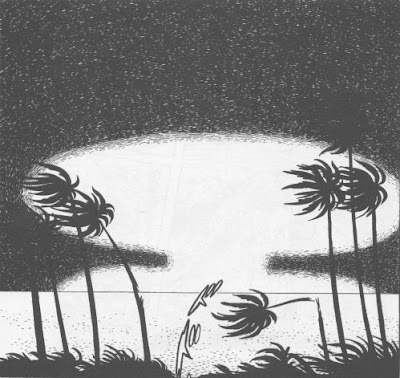 That comes from what might be the most interesting story here, and one that touches on one of Tezuka's favorite subjects (although that's probably not the right way to put it): war.  He's gone to that well again and again, but here it's specifically the devastation of the atomic bomb.  This story sees an artist working in solitude on a Pacific island get radiation sickness from nearby testing, but Tezuka is obviously referencing the attacks on Japan in World War II.  Even though he is supposedly alone on the island, the artist stumbles into a pile of twisted bodies, a horror that must have been all too memorable for Tezuka.  The story sees the artist wanting to create a painting to depict what he experienced in order to show the world the evils of the bomb, but his body is wracked by radiation sickness.  Black Jack's solution is to transplant his brain into a new body, and while that works, the artist loses his drive to create now that he's not dying.  But once his brain starts succumbing to radiation too, he's able to finish the work.  It's a fascinating rumination on the power of art to capture emotional experience, and also how only those affected by horror can truly relate it to others.  That's the kind of thing that Tezuka does so well, and it's obvious that this series gave him a chance to touch on it and a myriad of other subjects that suited his fancy.  It should be a delight to see what he'll be able to cover in future volumes.
-----

Tezuka went all out using members of his regular cast here, especially in the introductory chapter, which sees Duke Red as the rich father:

And Acetylene Lamp and Ham Egg as thugs: 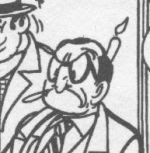 Along with a few other cameos.  A bunch of others show up later, like Rock: 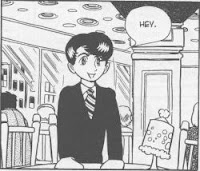 Mr. Mustachio shows up as a patient in the robot hospital:

As does Tezuka himself, with an amusing diagnosis:

And, of course, Hyoutan-Tsugi appears throughout, in the usual comic reaction spots.  Here are a couple of my favorites: 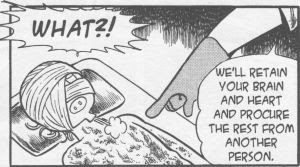 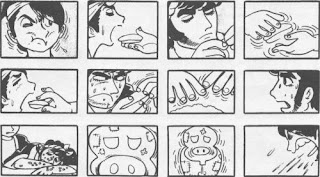 There are probably plenty of others of note (the kid with the X bandage on his head, the police inspector from Astro Boy, possibly Dr. Tenma), but that's more than enough for the moment.  We'll see who else shows up next volume.
Posted by Unknown at 10:06 PM