Elsewhere: I reviewed the final episode of Dollhouse over at The Factual Opinion.  I'll miss that show, as flawed as it was.

Link: Graphic NYC is doing a Kirby-themed week this week, and so far, Mike Cavallaro has a nice post about they way his style basically became subconscious.  Nice.

On a personal note, I would have had this up this past weekend, but my scanner died.  I'll hopefully have a solution soon, but this goes up now thanks to the help of Tucker Stone, who generously offered to do the work for me.  What a stand-up guy. 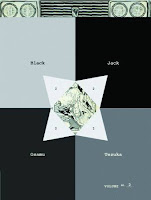 With this second volume of the series-spanning collection of one of Osamu Tezuka's most famous works, it becomes obvious that it's going to be a bit spotty, sometimes brilliant and sometimes kind of rote.  With chapters that jump around in the series chronology (as it were), it's not really possible to witness any sort of thematic development, but one can tease out ideas that Tezuka would return to, such as the need for human interaction and empathy when treating patients, and Black Jack's code of honor that compels him to do everything he can to save a patient once he's started treating them, or keep his word no matter the cost.  There's a bit of loneliness caused by lack of human interaction as well, along with a forced misanthropy that comes with it.  He's certainly an interesting character, and while Tezuka doesn't really develop him as the series progresses, he does reveal depths and layers, allowing us to see the man underneath the scarred surface.

Those character pieces are probably when the series is at its best, with a pair of chapters standing out here in the way they demonstrate an aspect of Mr. Jack's personality.  The loneliness and longing for understanding come to the fore in a flashback story that sees him befriending a killer whale that keeps showing up in a cove near his seaside house.  It always seems to get injured, so Black Jack nurses it back to health, sometimes performing surgery, accepting pearls as payment.  But it turns out that the whale is a menace to the local fishermen, always disrupting their business, and eventually overturning a boat and killing somebody, so even though it comes to him and begs, Black Jack is forced to refuse to treat it, making for a surprisingly emotional scene: 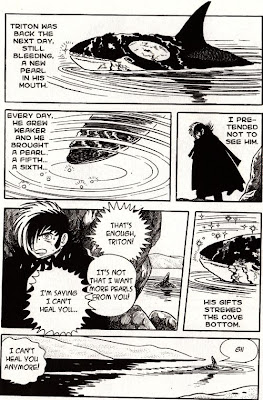 It's a good look at the nicer aspects of Black Jack's character, the softness that hides underneath the tough exterior.  But he can still reveal depth through his scary facade, as in a story that sees him chance upon a family on the road and give them a ride, then meet the man's mother, an old woman who compares him to another famous talented (and high-priced) surgeon.  The mother constantly badgers her son and his wife for money, and it turns out that she was paying off a lifelong debt to that other doctor, who saved her son as a child and charged her an exorbitant fee.  In a tidy bit of dramatic irony, right after finally paying off the debt, she suffers a stroke, and the son begs Black Jack to save her.  He agrees to do so, although the son will end up with a similarly hefty debt.  Or will he?  Maybe Black Jack was just testing him to make sure he loved and cherished his mother as much as she did him.  The chapter ends without revealing whether Black Jack will hold him to his debt; our hero might actually be as mean as he seems, you never know.

This chapter also sees a nice bit of artistic work on Tezuka's part, as he originally depicts the old woman as cranky and cantankerous, with a hunched demeanor and pinched face, not a very likeable person: 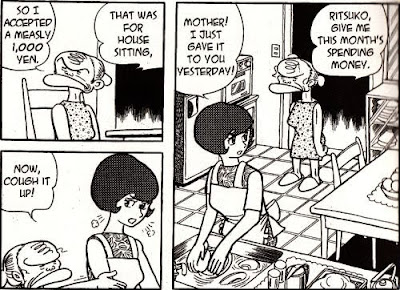 But when the reasons behind her money-grubbing are revealed, we see a series of flashbacks that suddenly soften her, depicting her at earlier points in her life in which she is obviously the same person, but younger and more sympathetic: 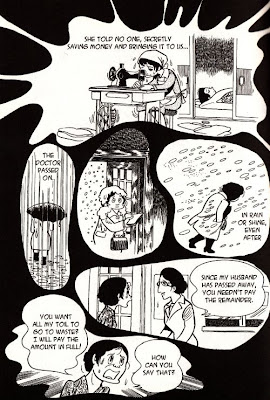 It's a nice reversal, perfectly executed by Tezuka.  He does a nice job on the layout too, with the panels looking like memories splashing and dripping across the page.  That's the kind of thing he seems to toss out effortlessly; it's as though had an almost instinctive flair for storytelling.

Some other regular themes pop up here: the mysteries and wonder of the human body (Black Jack is unable to retrieve a broken needle from a patient's body, but it flows through his veins and miraculously comes back out the original injection point), the need for human caring in medical care (a hospital which operates on an assembly-line-like system nearly breaks down when the head doctor's daughter needs treatment and he tries to give her priority), Black Jack's sense of honor (he goes to great lengths and spends ridiculous amounts of money to save the life of a man who saved his own life), his combative nature when it comes to rivals who seek glory (a skilled acupuncturist who roams the countryside treating patients for free gets brushed off with "I can't abide showy do-gooders!"), and, of course, his general awesomeness (he performs dozens of surgeries at the same time in order to relieve the burden of the aforementioned assembly line hospital, he memorizes the layout of a boy's intestines while being held hostage so he can operate on him in the dark).

There's plenty of other good material here, as in the story in which we see the origin of the patch of differently-colored skin on Black Jack's face.  It came from a fellow student of his who was of mixed race, and the story sees Doc Jack try to locate him as an adult, following clues across the globe before coming up short, although Tezuka does get to work in an environmental message.  It's always interesting to see our hero fail, which happens in this story (although it's not a surgical failure) and other places, or get shown up, which happens in the story with the acupuncturist (who is blind, by the way, making for a cute reference).  And another striking thing Tezuka does is unflinchingly depict the injury and even deaths of children: 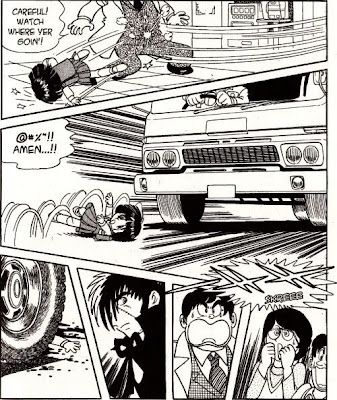 Threats to children can be notoriously empty in fiction, but when it comes to medicine, it's a fact that not everybody can be saved, and what better way to make that hit home than to depict it happening to the most innocent?  It certainly works, in a way that leaves the images lingering in the mind.

That's a testament to Tezuka's artistic skill, as are the dynamic bit of action that he throws in.  Most arresting might be this two-page spread of a tunnel collapsing on top of a school bus: 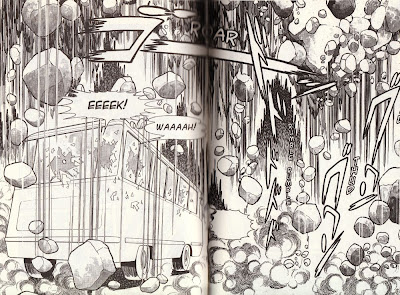 I love the plunging speed lines, falling rocks, and chunky sound effects crashing across the page.  It's a pretty incredible image, and only one of the many that Tezuka pulls off with aplomb.  I'm still finding this to be a lesser example of his work, but it's sure enjoyable, full of interesting ideas and weird Tezuka flourishes.  Maybe my opinion will change upon experiencing more of this series, but at the moment, it's simply quite good, rather than great.
-----

More of the regulars show up here, but putting aside the ones already spotlighted in the first volume, we also see Dr. Tenma: 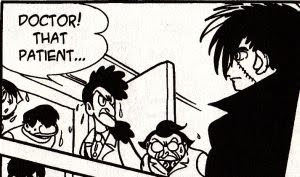 Melmo (as both an adult and a child): 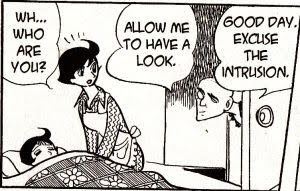 And Hyoutan-Tsugi is always worth pointing out, as in this whack-a-mole bit: 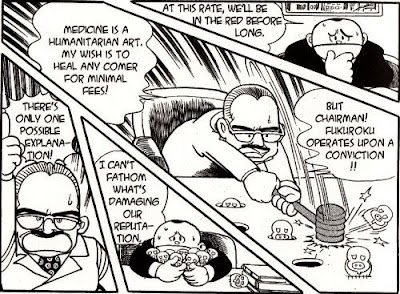 Or when he plays a newscaster: 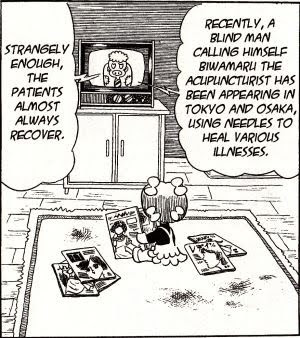 That Tezuka, he rarely passed up a joke, did he?
Posted by Unknown at 7:29 PM