One Pound Gospel: Punching (and munching) to a conclusion

One Pound Gospel, volume 3 and 4
By Rumiko Takahashi 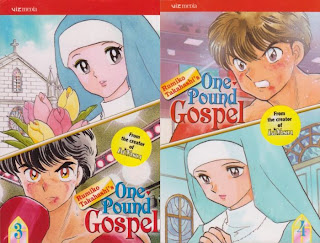 Even a lesser work by a great like Rumiko Takahashi can be a great read, and this boxing/romantic comedy manga certainly is, demonstrating her wonderful sense of comic timing and skill at defining characters without tiresome exposition or speechifying.  It's highly enjoyable reading, with each new chapter presenting a unique, if somewhat predictable, conflict for our hero and his would-be lady-love to overcome.

That hero, Kosaku Hatanaka, along with those surrounding him, is what really makes the story work; he's a dedicated boxer, but he's undisciplined, a slave to his stomach, always distracted by hunger and struggling to keep his weight within the limits of his class, not to mention preoccupied with thoughts of the object of his unrequited affection.  That would be Sister Angela, a nun who has feelings for him, but can't ever commit to him, for obvious reasons.  There's the central struggle of the series, with Kosaku trying to show his love for the Sister, and her trying to show friendship and support while fending off his (admittedly ridiculous) romantic advances.

While Takahashi doesn't really break new ground here or anything, it's sure fun to see her run through variations on her theme.  Volume 3 sees two shorter stories, one in which Kosaku take on a sort of apprentice, a kid who wants to be a boxer, and he has to prove his dedication to his parents by knocking out the strongest boxer at the gym.  His attempts to accomplish his goal have him always trying to sneak up on Kosaku and sucker-punch him, usually trying to tempt him with food first; it's silly and hilarious, especially when the kid keeps screwing up and punching the coach instead.  In the second short story, Kosaku befriends a fellow boxer from Mexico who has been imported to Japan in hopes of making it as a pro, but he's stymied by the guy's tattoo of the Virgin Mary on his stomach: 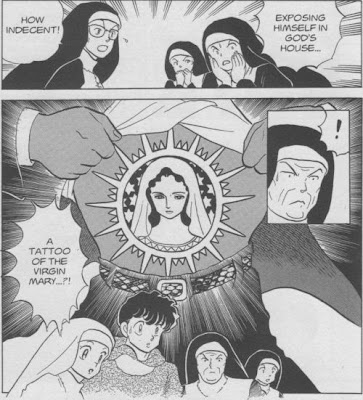 See, the abbess at Sister Angela's convent forbids him to punch an image of the Holy Mother, which leads to hilarious complications and such.  There's also other gags, like the guy's nickname, Tako, which is Japanese for octopus, but also refers to his attempts at cooking at his boss's restaurant, which turns out terrible, with only the always-ravenous Kosaku able to finish one of his dishes.  Comedy!

The longer story in volume 3 sees Kosaku befriend a woman who seems to be in the same boat he is, trying to lose weight but always sneaking off to hide and eat.  She is having trouble with her fiance, who wants her to lose weight to fit into her wedding dress, since she is so terribly flabby: 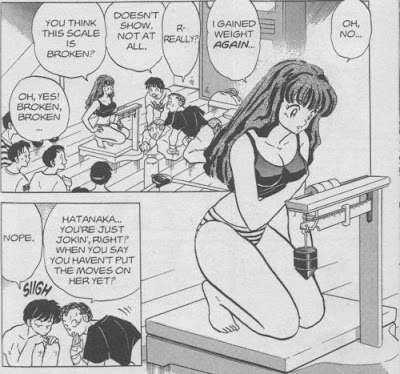 Ah, the Japanese.  If that woman is fat, I'm a nun.  Anyway, she ends up leaving her fiance and moving in with Kosaku, but relationship is completely platonic, since he only has eyes for Sister Angela.  But there are wacky misunderstandings, of course, and the sister keeps getting jealous and questioning her dedication to God if she has feelings for Kosaku.  And wouldn't you know it, but the fiance turns out to be Kosaku's next opponent, so everything comes together for maximum drama and resolution.  Could there a reason for her weight gain, one which glosses over the apparent abusive nature of the couple's relationship?  Who cares, they're only minor characters, so we get to assume they live happily ever after.

The final volume gets to wrap things up, although it does it in a sort of roundabout way.  Another supporting character shows up, Sister Angela's scheming aunt, who wants to marry her off to some rich fellow and get her out of the convent.  And Kosaku might be considering quitting boxing to be a restaurateur.  Or, you know, he might continue with the pugilism and she might decide to get together with him.  That ending is pretty much inevitable, but Takahashi seems to agree, and while she gets the characters in the place they're supposed to go, she doesn't push the theatrics to an unbelievable degree or over-dramatize the emotions.  No, she mostly focuses on the storytelling, and when things get to the right point, she ends the series a page or so later.  Maybe she felt a need to conclude the story, since she worked on it sporadically starting in 1987 but didn't actually conclude it until 2007, but while the stories leading up to the finish are still pretty good, the ending just kind of shows up with little fanfare, as if it was expected.

But while that ending isn't entirely satisfying (which can be a common problem in manga series, so Takahashi isn't alone here), getting there is as enjoyable as ever.  And its predictable nature isn't out of character for the series either; in almost every story, Kosaku manages to happen across a future opponent and get personally involved in some way, with threats of vengeance sworn or promises to demonstrate superiority given.  But it works; as formulaic as it might be, Takahashi has a light enough touch that reading brings a smile to the face, whether from the slapstick comedy, the perplexed, angry, and frustrated facial expressions of Kosaku's coach or Sister Angela, or just the sense of comic timing.  Running gags show up here and there, like Sister Angela continually riding off on the coach's bike when jealously storming away from Kosaku when misinterpreting his relationship with his temporary female roommate, or an opponent always getting worked up at stray comments because he doesn't have a flashy style: 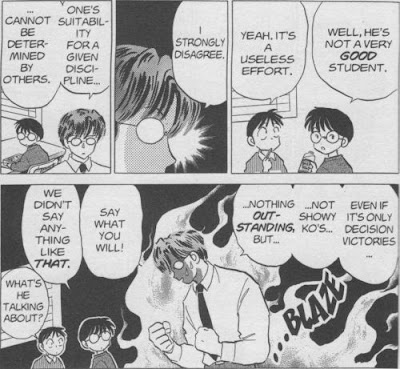 And the art always works to make the characters bounce off each other hilariously; just look at Takahashi's skill with facial expressions, like this angry look the sister shoots Kosaku when he accuses her of jealousy: 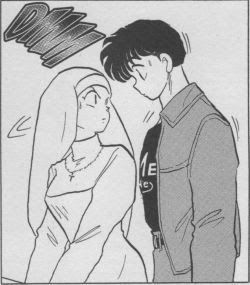 All in all, this manga might not be the highlight of Takahashi's career, but it's a solid second-tier title, demonstrating her natural skill at comedy and character work.  It's pretty lighthearted stuff, making for a nicely grounded bit of romance and sports action that never fails to bring a smile to the face.  Not everything can be a classic, but even a minor entry in a bibliography like Takahashi's is worth checking out, and a treat is in store for anybody that does so.
Posted by Unknown at 1:09 PM