I'm behind on reviews, but my excuse is a skiing injury, which has kind of sidelined me for the moment.  I'll get caught up, but in the meantime, I watched a movie I wanted to talk about.

But first, here's some links and stuff.  In the last week or so, I reviewed Doomwar #1 and Atomic Robo: Revenge of the Vampire Dimension #1 for Comics Bulletin.

I thought this collection of Lum pin-ups by various manga artists that Shaenon Garrity posted was pretty sweet.

As a recent Iphone owner, I've found various apps that are pretty cool, but this one is especially notable: Weekly Astro Boy Magazine.  For 99 cents each week, you can download a couple hundred pages of Tezuka manga, including Astro Boy, Buddha, Phoenix, Dororo, and most recently, the out of print Adolf.  That's something to check out.

Hey, look at the new book Tom Neely put together, collecting his "cover versions" of various Creepy covers.  Those are pretty great, so this makes a really cool package. 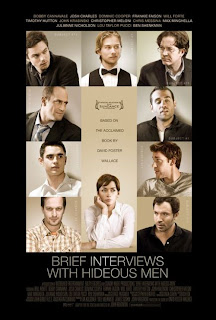 For some people and some works, it's impossible to separate an adaptation from its source material, and that's definitely the case with this film version of David Foster Wallace's book, at least for me

.  Whether or not the movie works on its own is probably best answered by somebody else, since for me, all I can do is compare the two; as interesting as the material is, when watching, the interpretation of the book's text is the primary line of thought.  Maybe that's a judgment of the film itself, that it wasn't good enough to stand on its own, but it's probably just a demonstration of the Wallace-obsession of this particular viewer.

Still, this is certainly an odd choice to adapt into a film, in that the book is a short story collection rather than a novel, and the segments that share the title are mostly unconnected, consisting of monologues or dialogues in which the men indicated (who are given the chance to demonstrate whether they deserve the description given) talk, mostly about their relationships with women.  There are other, even less connected, stories in the book, but the film ignores those, sticking to the interviews.  And, since a true adaptation would simply be a series of talking heads, writer/director/actor John Krasinksi (of the American version of The Office) wraps them up in a rudimentary plot, which sees a female graduate student interviewing the various men for her thesis, with several of them also being involved in her personal life.  It's not really a totally necessary addition, but it does bring some structure to the film, especially in the climactic monologue delivered by Krasinski himself, which is given a personal touch by making him her ex-boyfriend.

But still, the heart of the movie is those monologues, and Krasinski takes various approaches to them to spice things up.  Several of them do see the speaker sitting in front of a brick wall and speaking to the camera, including Bobby Cannavale's one-armed skirt-chaser and Ben Shenkman's guy with the proclivity of shouting "Victory for the forces of Democratic freedom!" when he orgasms.  In other cases, Krasinski gets more artful,  presenting one "interview" as a conversation overheard in a coffee shop as Christopher Meloni regales a fellow businessman with a tale of meeting a woman in an airport; as the story unfolds, we see the meeting take place in flashback, with Meloni and his friend showing up in the background and discussing the events.  Another man, played by Josh Charles, gives an apologetic breakup speech to a series of women, and it is presented as a rapid-fire montage, cutting from woman to woman but obviously being the same rehearsed words delivered on different occasions, before finally ending with Charles facing the camera in front of the familiar brick wall, red-eyed and ragged-voiced.  Frankie Faison (Commissioner Burrell on The Wire) delivers one of the only monologues not related to women, as he relates his disgust with his father's lifelong work as a bathroom attendant, and this is intercut with his father's description of the job, the two of them eventually standing in said bathroom and facing each other while alternating back and forth between their speeches. Still other scenes involve the interviewer more directly, including a student who pesters her about the grade she gave him on a paper in which he argued that personal trauma, like being the victim of a rape, isn't necessarily a bad thing.  There are also a couple young men who converse in the background of a few scenes about what modern women really want, often looking directly into the camera and following her around as if they are part of her subconscious.  And then there's Krasinski's final speech, about a woman who he fell in love with (and apparently left the interviewer for), and the way her description of her rape experience moved him; it's emotional enough on its own, but adding their implied personal history to the scene pushes the whole thing into melodrama, and while Krasinski manages to emote quite well, his final lines are too mean and vulgar for him to really sell.

Overall, it ends up working as well as could probably be hoped for, but at best it's probably an advertisement for the book, or at least for people to check out more of Foster Wallace's writing.  He has a penchant for long, discursive, loopingly wordy passages, and while those are captured here somewhat, they are often edited choppily, as if they had to be cut down to fit in an allotted running time, but Krasinski (or his editor) wanted to be sure to indicate that there was more to the "interview" beyond what we're seeing.  It's a bit frustrating, since the way the original text sees the characters edge their way around a subject and gradually make their true feelings clear is virtuosic writing, and much of that is lost when cut down to this state.  As it is, it's a collection of interesting, often fascinating monologues, and a chance for good actors to practice their stagecraft, boiling a character down to the basics and conveying those through body language and vocal intonation, but it still pales in comparison to the original work.  That's probably as good as we're ever going to get though; now let's see somebody try to adapt Infinite Jest