Links and such: Here's a short "Giant Man" story from Matt Kindt, available before it's scheduled to be part of the next "issue" of Myspace Dark Horse Presents.  Looks good; I still need to read that book though...

Here's a contest I might enter: Adhouse is having people submit Afrodisiac-themed art, and their picks for the best entries will win prizes like original art or signed copies of the book.  I just might try to send something in.

And here's a bit of weirdness: a music video featuring just about every one of Osamu Tezuka's characters, set to a senses-overwhelming rave song, and seeing Astro Boy get operated on by Black Jack to get some sort of ridiculous makeover.  Strange!

It's been much too long since I read the previous volume of this series, but in my absence, Kazuo Umezu certainly hasn't missed a step.  What I'm saying is, holy crap, this series is nuts.  It's just one moment of unbelievable insanity after another, set at the highest intensity and never letting up.  And somehow, it never seems to get old or overstay its welcome; the kids in this horrible drama manage to seem like people we can root for, or at least hope they don't die horribly.  Maybe that just comes from their being kids, but they've gone through some awful shit by this point in the series, and things never get better.  The future of the younger generations at the time this was written may have been in question, but what Umezu put them through makes societal pressures seem tame in comparison.

So, what's in store for our merry band of survivors this time around?  They escape from the scaly mutants they faced last time, but get followed back to the school, with a bunch of students dying in the attack (which, in a series of rather gross scenes, sees the mutants vomit up some spider-web-like substance to encase people or create bridges to climb walls and buildings with).  Then, the ongoing dispute between Sho and his ex-pal Otomo sees the students split into two factions that end up at war with each other over trivial matters like flower ownership.  Also, knife fights: 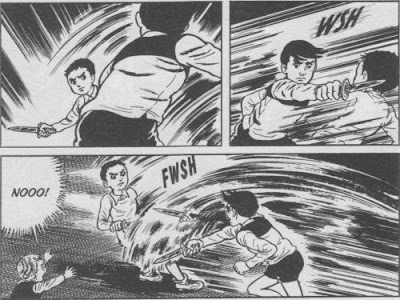 And then they get attacked by giant starfish, just for more fun: 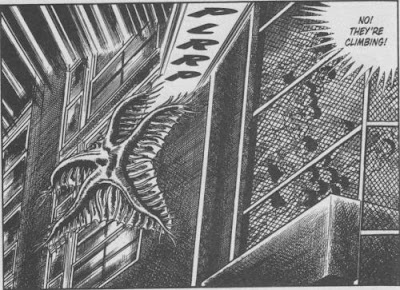 Also, Sho develops appendicitis, so the other students operate him, in what would be a credibility-stretching scene in most any other series.  Here, however, it fits right in with the over-the-top atmosphere, and provides some stomach-churning surgery scenes that add to the air of horror and gruesomeness: 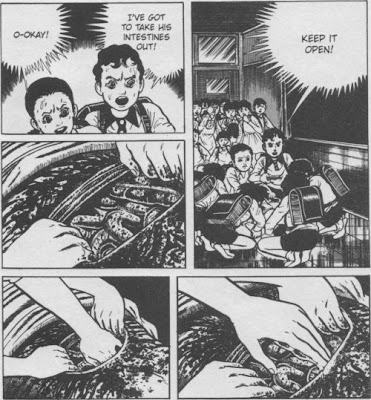 You never know what Umezu is going to throw at his characters next, but it's always fitting, somehow upping the stakes to a ridiculous degree.  How he's going to manage to finish the series is probably going to be mindblowing and ridiculous, but also completely awesome.  Or absolutely terrible; we'll have to see.

But in the meantime, we can marvel at Umezu's techniques, which are full of the perfect stylistic devices for the tale.  The way he fills pages with torrents of speed lines makes the kids seem to be in constant motion, and when they're getting in fights with each other, it can seem like a crazy swirl of chaos: 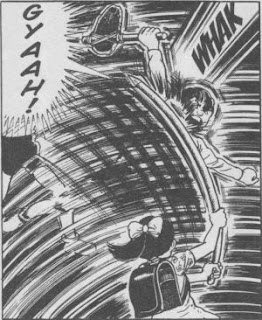 It's strange; the character art can be kind of stiff (maybe from constantly tensing the body for screaming), but it works perfectly for the story being told.  Kids can be kind of strange anyway, and Umezu just emphasizes that oddness, making it part of the constant creepiness of the series.  He does mix things up though, with some roughness creeping into the art during highly emotional scenes, like this one between Sho and Otomo: 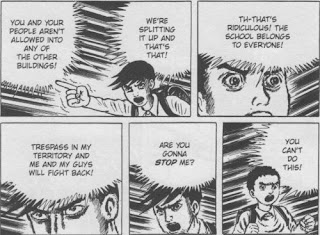 But that's nothing compared to the surgery scene, in which Sho's terrible pain makes the linework shake to its roots: 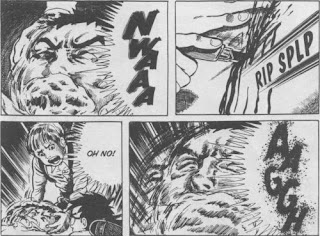 That's some disturbing stuff there; as unrealistic as the situation is, Umezu makes us feel it.  And he fills the book with other, more cerebral, unnerving moments, like one in which Sho has one of his cross-time psychic communications with his mother, and another girl acts as a sort of radio receiver for her voice: 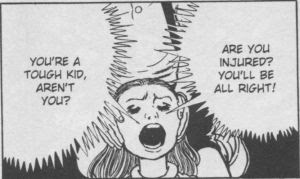 Maybe it's the way her mouth opens to the familiar screaming width, but the rest of her features remain calm.  That's creepy.
This is some amazingly good comics, as long as you can get in the right mindset.  There's something about the way supposed innocents can be placed in the worst situation and seeing the way their actions reflect the state of humanity at large.  And with Umezu taking any chance he can to throw in his patented craziness, the result is something special, like nothing else out there.  Two volumes to go, and constantly increasing stakes can only mean that they'll blow minds with their nuttiness.  They'd better.
-----
Bonus: lots of "Oh shit!" moments: 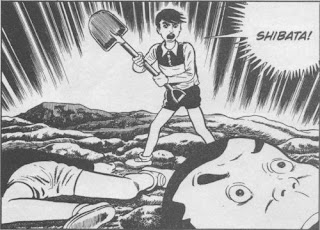 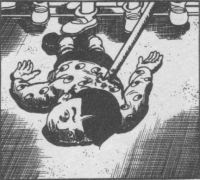 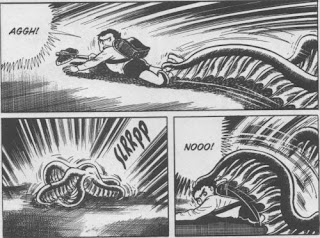 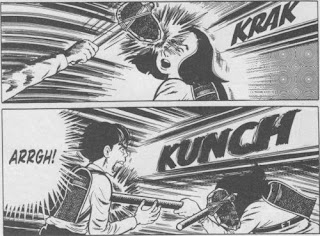