Collection catchup: I get behind on webcomics too 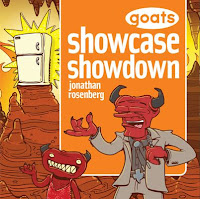 This is the third volume in the aptly named "Infinite Pendergast Cycle", which seems like it could go on and on forever (although it has to catch up to the online comic's current output sometime), pouring more and more amusing absurdity involving interdimensional travel, cosmic hacking, demons, Woody Allen, Mayan apocalypse, drunkenness, insanity, and mindless violence into the bottomless container that Jon Rosenberg has created.  It's engaging stuff, in the "what sort of weird, silly shit is going to come up next" sort of way rather than any sort of pressing need to know how it will all turn out.  Things just sort of happen here, and then more things happen, and so on, but it's all so absurd and unpredictable, with a basis in smart-seeming (or perhaps just aimed at the right type of nerd) sci-fi.  At one point, characters discover that their lives are being written by a couple monkey programmers who are getting rich selling graphic novel versions of whatever happens in the book, and this leads to the discovery of a typewriter that can rewrite the universe.  There's a demon seeking a box of matches that can burn reality, a murderous baby chicken in a cyborg body, a turtle that controls a pocket universe/reality programming suite, and much other ridiculousness, including lots of deeply nerdy jokes.  The story does take an odd turn about two thirds of the way through this volume, when most of the cast suddenly dies and one character takes over a demonic software company, leading to lots of jokes about corporate culture and the internet, like a deranged Dilbert or something.  But it's still pretty damn funny, and while the artwork itself isn't amazing or anything (beyond a strikingly bizarre image here and there), the coloring is superb.  It's certainly something that makes me want to keep reading, if only to experience random hilarity like this: 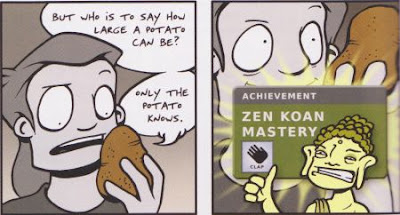 Penny Arcade, volume 6: The Halls Below
By Jerry Holkins and Mike Krahulik 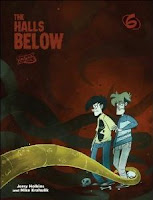 Speaking of webcomics, this is probably the most revered one on the entire internet, having built up not only a  huge following, but a respectable side business of conventions and charities.  That's interesting to see, because it's a strange comic, one that is very unique to its creators' sensibilities, like nothing else out there.  It originally was a mediocre strip about video games, gamers, and the accoutrements of that culture, a decent source of that sort of humor with the added factor of Holkins and Krahulik's personalities.  But as the years went on, the two became weirder and more experimental, growing exponentially in their writing and artistic abilities, so by this point in the run (this volume collects the entirety of the series from 2005), they were firing on all cylinders, not content to just make jokes about whatever games were in the news that week.  Instead, we get jokes about how horrifying it would be to newspaper editors if Penny Arcade tried to replace Garfield, Hollywood buying any stupid/"cool" idea, amusing wordplay, or just general antagonism between Holkins and Krahulik's stand-in characters, Tycho and Gabe.  Strips often start off referring to some game or system, but then veer into weird, intentionally awkward bits of violence or sexual references.  Pacing is strange, with the main joke often coming in the second panel of the standard three-panel strip, with the final frame being all about reaction, rather than a punch line.  As crude and lowbrow as much of the humor is, the style is actually pretty avant garde, with the creators trusting each other and their audience to come up with something that amuses them and trust that everyone else will be able to follow along.

As with most all webcomics, this material is still available to read for free online, but the print version does come with commentary for every strip by Holkins, and it's revealing and well-written, explaining references that might not have survived the sands of time, commenting on his and Krahulik's working relationship, pointing out jokes that didn't really work, and adding another layer to the already-amusing comics on display. The whole thing might be borderline unreadable without some of this, although Krahulik's art certainly stands on its own, having evolved by this point into a loose-limbed, expressive cartooniness that's just plain pleasing to look at.  It's a fun read, and if you don't fancy trawling through the online archives, these collections are the way to go.
-----

This is a sequel to a self-published graphic novel that came out in 2007, in which a kid spends hundreds of lifetimes constantly fighting history's greatest warriors in order to become the gatekeeper between heaven and hell.  It wasn't great, but it was a lean, mean story that never stopped moving, throwing constant violence onto the page right up to the end.  This second volume tries to open up the world of the story a bit, to mixed results.  Heimen Dale, the protagonist, gets killed early on (by a gun, which isn't allowed in his stomping grounds of limbo, although it's never stated whether having one there is "impossible" or just frowned upon) and sent to hell, where he meets up with the god Thor (who, in an apparent attempt to separate him from his Marvel Comics counterpart, sports a cowboy hat, solid gold teeth, and a love of heavy metal music), and the two of them set off to find a way out.  That seems like a concept for a decent adventure story, but it gets sidetracked almost immediately when they end up at a demon bar where they spend almost the entire volume doing a lot of drinking and gladiatorial monster fighting.  It's a strange way to pace the book, with forward plot movement ground to a halt early on, perhaps as an attempt to do character work between Heimen and Thor, although that mostly just comes off as awkward, with some pretty regrettable dialogue about women and manliness and such.  The art doesn't fare much better; there's some decent action, but nothing that really astonishes like it should; the demon designs are only so-so; and the sexy women that constantly tempt Heimen to betray his (possibly imaginary?) girlfriend are all the same balloon-breasted, wasp-waisted babes that show up in the portfolios of artists who desperately want to break into the industry (and don't forget the nudity helpfully covered by wisps of smoke.  Just draw nipples and/or penises; it's not that big of a deal!).  The best image by far is [SPOILER] that of Heimen, having given into his gluttonous urges, with a huge potbelly and a ridiculous crown for some reason.  It's hilarious. [END SPOILER]  That's the best thing about the book: the occasional surprise, like the inclusion of Heimen's nine grandmothers (his father is the Norse god Heimdall, so maybe this is a mythological reference, but it just seems funny to me), who are all hot chicks in different costumes like "naughty schoolgirl", "tattooed leather chick", or "scantily-clad superheroine", many of them carrying ridiculously oversized weapons like a giant hammer.  There are odd music references, like a demon named the Lizard King who was the one who possessed Jim Morrison and wrote all his songs, or a different demon who looks like John Lennon and gets people hooked on imagination drugs.  If there was more of this oddball material, the book might feel like something unique and interesting, but as it is, it's a generic demon-fighting thing with vapidly stylish anime-esque art.  Oh well, one can always hope the next volume turns up the strangeness and eases up on the dumbness.  It could happen.
Posted by Unknown at 10:59 PM