The Art of Ditko
By Steve Ditko
Edited by Craig Yoe 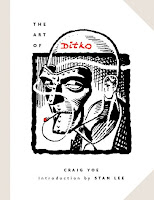 When it comes to artistic traits that Steve Ditko was known for, the onest that probably first spring to mind are expressive hands and crazy, psychedelic mindscapes, and like any halfway-decent collection of his work, this book is full of those.  But there's more to what he did, and Craig Yoe, in this collection that draws from the various stories Ditko illustrated for Charlton in the 1950s, 60s, and 70s, demonstrates several additional aspects of his artistic personality, showing that there was a lot more to him than Spider-Man, Dr. Strange, and Objectivism.  Here are a few that I noticed:

Ditko was never a slouch at depicting action, but when it came to depicting a flurry of activity in a small space, he often used a neat technique in which several images were jumbled together within the same panel, making for an effective feel of wild, frenetic movement:

He could also use this to show a bunch of activity all at once, like a character searching for something in different locations, and it works remarkably well, making things clear and understandable, even with so many images packed together and overlapping each other.  It's certainly something that's harder than it looks.

The hands get all the attention, but Ditko managed to use eyes really well too, especially when demonstrating fear or obsession.  He uses a goofy technique here and there in which disembodied eyes overlap other action occurring in a panel, and it's hella creepy: 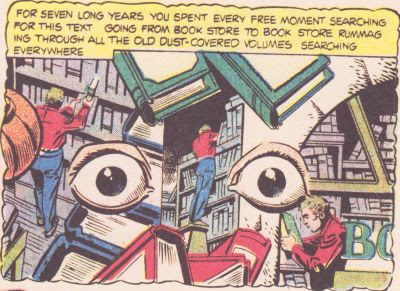 There's something about the inclusion of the lids rather than just the eyeballs, or the blank space between the eyes, that seems unnatural, and it's just offputting enough to lend an extra bit of weirdness to stories, which, judging by the selections here, could certainly use some spicing up.

In fact, many of these stories were pretty terribly derivative, full of cheesy "horror", predictable twists, and lame dialogue.  But Ditko managed to make them sing, classing up the place with all the neat visual hooks, and even adding some sex appeal, which was something he wasn't really known for.  It's a shame though, because he could deliver, whether showing off mystical temptresses: 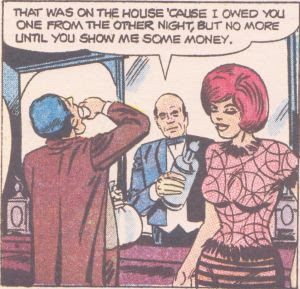 I especially like that last one; the classic Ditko spiderweb design on her shirt kind of makes her the ultimate Ditko babe.

Since Tales from the Crypt and other such comics established the wisecracking emcee character, it seems like every horror series had to have them, and the ones in these Charlton books are kind of lame.  But Ditko still managed to give them each their own personalities, which is saying something.  Dr. Graves, of The Many Ghosts of Doctor Graves, is a smoking-jacket-wearing professional, warning readers of the dangers of bad living.  Dr. Haunt, of This Magazine is Haunted, is more of a silent observer, lurking in the shadows (or between panels) and watching events unfold: 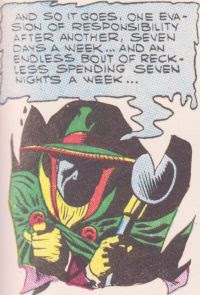 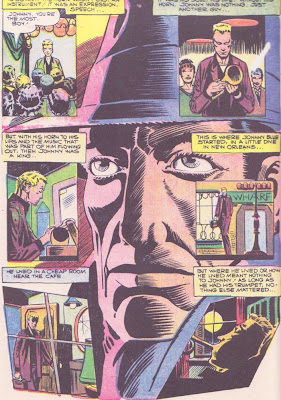 And Mr. Dedd, of Ghostly Tales, is the wisecracking jokester, making terrible puns and observing the goings-on of his characters with a smirk at all the bad stuff that happens: 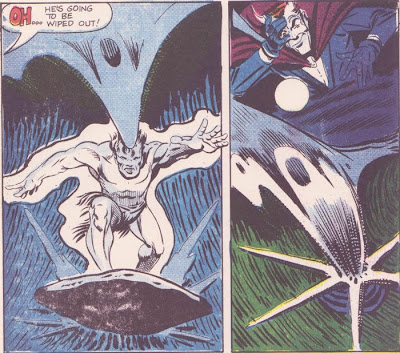 The whole "host" idea is a goofy device, but like the rest of the silliness that abounds in these stories, Ditko makes it work.

And here's where it gets really cool.  Working for cheap for Charlton must have given Ditko the opportunity to experiment, try out new ideas, and see what he could do with the comics format, and he came up with some great stuff here, really pushing the limits of the way stories could be told with panels on paper.  One story which sees Dr. Graves supposedly searching through his files for information regarding the tale he's telling turns every panel border into the shape of a file folder, starting out with fairly standard layouts, but as the story goes on and becomes more frantic and fast-paced, eventually seeing panels/folders angled and tilted every which way, in all three dimensions:

In at least one story, Dr. Haunt lives up to his magazine's title, appearing as a ghost peering out from holes within the pages themselves, even tearing them open to get a better view of the proceedings: 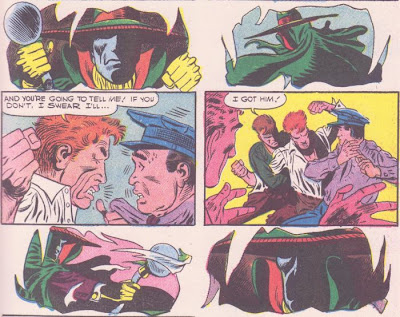 And there was always the trusty standbys, like having a narrator manipulate the page directly: 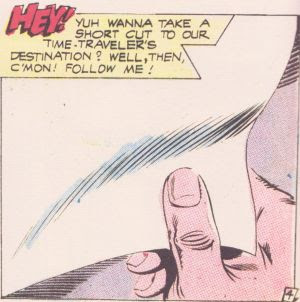 It's pretty amazing to see what Ditko came up with nearly half a century ago.  Modern cartoonists could do well to study these ideas and put them to use in stories that deserve them.


The great visuals didn't stop with the formalism either.  Ditko was doing some exciting stuff, coming up with ways to show action and emotion, depict supernatural effects that can't really be shown literally, or convey mood through innovative designs and layouts.  And every so often, he came up with some incredible visuals, with the foremost (judging by Yoe's effusive praise and placement of it just after the book's title page) being a depiction of time travel that gives the page a 3-D effect and perfectly demonstrates the idea of hurling backward into the past: 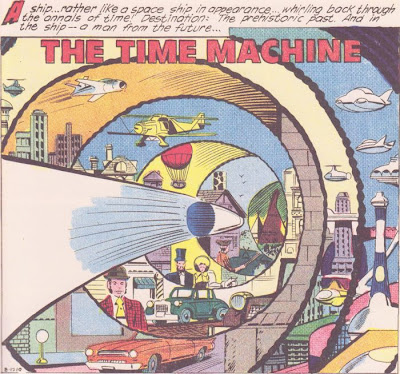 Stuff like this makes this book worth reading, just to get a glimpse of one of the masters of the medium at work.  Sure, his Marvel stuff is fine, and he came up with some enjoyably weird concepts later, but there's nothing like seeing a talented artist at the top of his game trying out idea after idea and livening up what would be unreadable dreck in anybody else's hands.  Let's hope more people check this book out and learn from it.
Posted by Unknown at 11:25 PM