The Signifiers: They signify my confusion

Elsewhere: I wrote about Iron Man 2 for The Factual Opinion, and in the first of what will hopefully be a bunch of regular pieces for Indie Pulp, I reviewed the first volume of Sweet Tooth, which I think I liked less than most.

I haven't read this one yet, but it looks neat: a prequel comic to the movie Inception, by Udon. 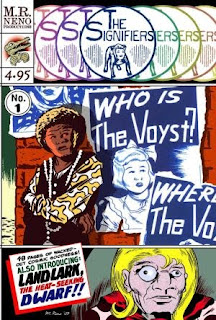 Jack Kirby imitators are a dime a dozen, and have been for a good forty years, but every so often, somebody manages to get it right, using stylistic techniques and the forward-looking sensibility that actually fits the King's legacy, rather than slavishly imitating his visual tics or marching out his characters to reenact yet another cosmic dust-up.  Michael Neno is definitely trying for something more substantial than brightly-colored guys punching each other here, and even if he's not fully successful, he's managed to take something familiar and recognizable and make it unique and strange all over again, which is not easy to do.

This 48-page self-published black and white pamphlet is actually broken up into three separate stories, although they may all take place in the same "universe".  The first one, which shares the series' title, is probably the strangest, and also the hardest to follow, starting off with a splash page of a woman's screaming face, then revealing that her head sits on the body of a dog, and she's being tortured by three guys in weird costumes.  She gets rescued by a band of outsiders in a Big Daddy Roth hot rod, then the scene abruptly shifts to five years later, with the rest of the story following those outsiders as they live in a sort of walled-off slum on the edge of a wasteland.  There are some attacks by more weird people, hushed conversations about an impending danger, a boy who apparently has some sort of destiny as a leader, and discussions of a strange force known as The Voyst, and while little of it makes much sense, it's pretty arresting stuff, a weird world that Neno drops readers into and expects them to keep up.  Maybe more will be explained in future issues, but even this small portion is enough to bring a vital, breathing world to life, one that merits further exploring.  The crazy designs and odd dialogue rhythms really stand out, and there are at least a couple bravura sequences, like a scene in which one of the trio of aforementioned torturers turns out to be an amnesiac who stole his equipment and is interrogated by benign-seeming agents of the government (?), making for a nice escalation of danger and a sense of paranoia. There's also a single page sequence that follows a missile being fired as it races toward its target, accompanied by captions bearing the lyrics of a rap song about a girl named Maria, which is a cool, surreal touch.

The second story is a short one called "Nellie of Cosmic Brook Farm or: Cosmic House on the Prairie", and it is presented on every page as five tiers of two small panels that see an alien attacking a farm and the titular Nellie donning some Kirbytech equipment to fly up into the sky and fight it.  It's weird and goofy, with the small panels making everything claustrophobic, yet bursting out of the space that confines it.  Who knows if this is just a one-off story or if it will be followed up on, but it works great for a sort of breather in the middle of the issue, something that's plenty strange and exciting, but not as confounding as everything else.

Finally, we get to spend time with "Landlark, the Heat-Seeking Dwarf", an odd story about the polka-dotted short fellow being imprisoned by some mean guys, then escaping, falling in with some free-spirited hippies, and playing music with them on the street.  As with everything else in the comic, it's somewhat inexplicable, but there's a feeling of art and emotion being used to escape oppression, with Landlark's repeated catch phrase of "I came here to love!" and the happiness he seems to find with people who don't disdain him or seek to use him for unpleasant ends.  As with the other stories, it should be interesting to see if or how Neno follows this up.

This might not be for everybody, but for those who like to see a bit of pushing the limits of expression, Neno has put together something pretty fascinating here.  He's using familiar Kirby motifs, from the crazy technology, to the stilted dialogue, to recognizable artistic flourishes, but he's not slavishly copying from his inspiration, but using it as a starting point for something new.  It should be fascinating to see what else he can come up with as the series continues.
-----

You can buy the comic from Neno's website (where it is also being serialized), and while you're there, be sure to check out his other ongoing bit of goofiness, a webcomic called The Mesh.
Posted by Unknown at 9:46 PM