Elsewhere: I reviewed the graphic novel A God Somewhere over at IndiePulp.  It's not bad, but don't go in expecting the next Watchmen.  It's more like a decent human story with a really violent superhero thing wedged in the middle.  Worth a read though.

Octopus Pie: There Are No Stars in Brooklyn
By Meredith Gran 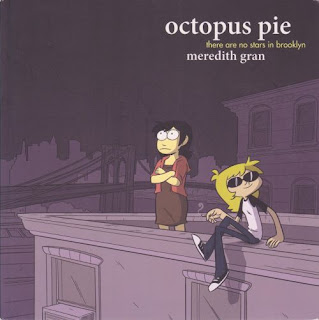 Webcomics come in all shapes and flavors these days, from short gag strips, to serialized storylines (comic and serious), to full-on graphic novels posted a page at a time, to experiments pushing the limits of the medium.  There's a ton of content out there to be found, but one can rest assured that the quality material is going to rise to the top and gain deserved recognition, considering the vast numbers of readers, fans, and commentators paying attention to what's available.  That seems to be the case with Meredith Gran and Octopus Pie, her slice-of-life strip (which fits into the "serialized story, with each page functioning as a stand-alone strip" format) about two roommates living in Brooklyn and having wacky adventures.  The series is available to read in its entirety online, but the first two years have now been collected in this volume, an oddly square-shaped affair that adds blank space above and below each rectangular strip and prints the originally black-and-white art in a sickly green ink.  It's a weird presentation, but it's still an enjoyable read, although it takes a little bit to really get going. At first, it's a fairly standard gag-a-day strip, following uptight twentysomething Eve, who begins the book looking for a roommate and gets set up with a childhood friend by her mom.  The friend, Hannah, in a wild and crazy twist, is a pot-smoking nutjob, always causing trouble and making a big ruckus, like those lovable stoners are prone to do.  And so the story goes for a while, ambling along with goofy plots and slowly introducing a supporting cast (Hannah's boyfriend, an always-cheerful hippie whose eyes are never visible; the angry, squiggly-nosed manager at the organic food store where Eve works; Hannah's dealer, who ends up being Eve's sometimes boyfriend).  It seems like a learning period, with humor that often seems forced, and art that, despite a strong grasp of character design and lively movement from the start, sees some odd, distracting quirks pop up here and there, like Gran's style of drawing Hannah with her eyes open and closed at the same time (no, she doesn't wear glasses): 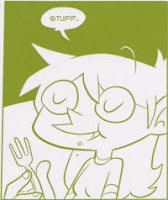 The pacing is a bit choppy at this point as well; one storyline sees Eve trying to come up with a "viral" marketing campaign for the store where she works, but she bombs out and ends up just submitting a crude drawing of a dog  and a word balloon stating "The fukken shit".  As one would predict, the ad (which was printed in The New York Times, which seems like an odd place to start a viral campaign) becomes a big hit, and Eve gets celebrated as a star, leading to the expected acting like a jerk to her friends and realization of what is really important.  It's pretty standard stuff, but the strange thing is how fast and jerky the plot moves, as if most of these events are happening off-panel and we're only treated to the necessary moments.  It's only a matter of a few pages between the ad getting huge and the status quo resuming, which might be why it seems so obvious; there's only space for the expected plot points.  Not every chapter is like this, but it's a definite example of the roughness of the first third of the book or so.

And then, a little less than halfway through (which means the strip had been running almost a year at this point), there's a moment in which Octopus Pie suddenly realizes its potential, in a story in which Hannah drags Eve along to go ice skating, leading to this gorgeous panel:

For whatever reason, this elegant bit of physical movement marks the exact point at which the humor suddenly stops feeling forced, but now flows from the characters and how they relate to each other and their surroundings.  The stories now seem less about the wacky things that happen to the characters and more about them living their lives and experiencing the glorious unpredictability of early-twenties existence, along with a bit of anxiety about where it's all going to lead.  Characters seem to enjoy spending time together, and friendships and relationships make sense, instead of seeming like types forced together for comedy's sake.  Gran explores some of the strange aspects of life, such as why we strive for acceptance from people we don't even like (in a story in which Eve gets an in with the local hipster crowd when she nurses an injured bird back to health and starts carrying it around on her shoulder) or how we're sometimes hesitant to have one group of our friends interact with another (in a chapter which sees Eve's nerd pals and Hannah's stoner buds clash and end up facing off in an epic laser tag battle).  It's an impressive maturity, even if it does bring along a few somewhat tiresome scenes in which Eve gets in a conversation with some character or another about her anxieties regarding herself and the world and her future and whatnot.

And the rest of the volume continues in that direction, seeing some very enjoyable writing and plenty of really nice cartooning from Gran.  She has an impressively expressive, cartoony style, with each character remaining distinct in their body shape, posture, movement, and expressions.  Eve sports a perpetual frown and glare, usually withdrawn and aware of anybody watching, while Hannah is exuberantly loose-limbed and huge-eyed, always grinning or shouting: 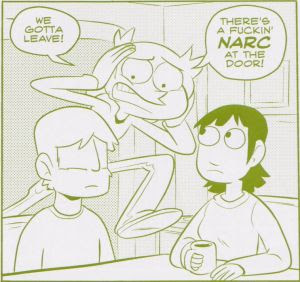 But as simplified as the art might seem, there's plenty of detail there to ground things in some semblance of reality, like the realistically-styled skirts, pants, and sweaters that the girls wear, the changing hairstyles they sport, or the sights and activities of the city around them.  It's also nice to see Gran experiment with her art style; she uses what appears to be a pen in one chapter to limit the lines to a uniform, thin width: 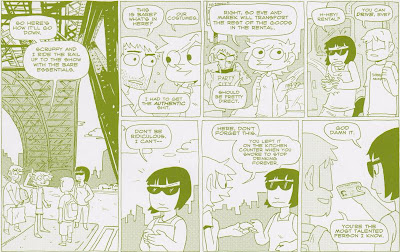 Then follows that with a chapter full of lushly-brushed ink lines: 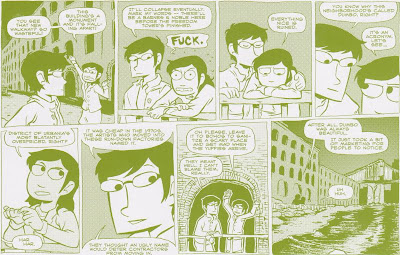 That's the definite pleasure in this volume: seeing an already-formidable talent grow and develop further.  It helps that the characters are fun to spend time with, and their antics are often quite funny.  It's also nice to see a creator unafraid of profanity or the frank depiction and discussion of sex, both of which are certainly present at this time in one's life.  One can only expect that the upward trajectory continues; Meredith Gran will soon be quite the artistic force to be reckoned with.  Now when does the next book come out?
Posted by Unknown at 10:27 PM