Fables: Happily ever after? 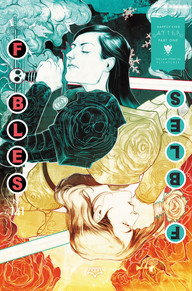 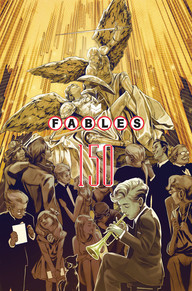 These two volumes form the finale of Vertigo's long-running Fables series, and I'm happy to say that they ended up being rather satisfying. The series struggled for direction at times, especially after resolving the main plot which had been driving it from the beginning, in which a terrible threat known as the Adversary had driven a number of characters from fairy tales and nursery rhymes from their magical homeland, leading them to take up residence in the "mundane" world, where they hid among regular, non-magical humans and planned to fight back against the conqueror of their homelands. From what I understand, creator Bill Willingham had originally intended to end the series with the big battle against the Adversary, but due to the success of the series, and probably some affection for the characters and the world he had created, he decided to go ahead and end that story, but keep the series going and see what happened next. The results were definitely interesting, but there were times that Willingham seemed to be struggling to come up with what to do next or how to keep things moving.

Luckily, he seems to have figured out how to give the series more of a focus and drive: go ahead and end it after all. With an ending in sight, the last volumes of the series finally seemed to give him a purpose, and after shifting the pieces into place, he sets about building to a pretty momentous final conflict with literally world-shaking stakes. He sells the idea that nobody is safe by unceremoniously killing off several fairly major characters, and as he builds up to a final battle, the scale of the players involved increases to barely-comprehensible levels, until one wonders whether the pages will be able to contain the bounds of the conflict.

And then he takes a sort of sidestep, the details of which I won't spoil, but suffice to say that the characters seem to find a way to break out of their set patterns and long-lasting personality conflicts to find a way to resolve things for the greater good. Is that a cop-out? Perhaps, but Willingham seems to find a way to keep from killing all of these beloved characters that seems satisfying and in-character. And it helps that he doesn't stop there, but spends several dozen more pages skipping forward in time to see what happens to nearly every character in the series over the ensuing years, decades, and centuries. It's a great way to offer some closure, but still leave things open-ended, allowing readers to imagine an infinite number of possible stories that could have happened, or may happen someday.

I shouldn't have taken so many paragraphs to get to it, but a special shout-out must be given to Mark Buckingham's art, which seemed to get better and better over the course of the series and reaches another level in the final volume, where he uses some gorgeous watercolor shading to give everything a magical sheen that emphasizes the fairy tale quality of the stories while still keeping things grounded in a semblance of reality. I especially love the Jack Kirby influence he brings to the crazy monsters that are all assembled for the final battle, but he's just as good at drawing out the tension in confrontations between characters, selling the horrible violence that gets visited on some old favorites, or playing up the menace that comes from some characters seeming to embrace horrible destinies. It's beautiful stuff, and I'm kind of sad that I won't get to see him do it any more. I'm sure he'll find something to fall back on, though.

So: is this the best ever Fables story? No, I don't think so, but it's still lovely, heartfelt, and enjoyable, a satisfying finale that makes me happy I read the series through to its conclusion. Coming up with an ending to any long-running series is hard, since everyone has their own expectations, theories, and hopes for their favorite characters, but Willingham and company (some great artists get to contribute to the various short pieces explaining what happened to all the major and minor characters, and it's a treat, as always, to see them put their own spin on the familiar figures and surroundings of the series) manage to finish things off about as well as could be hoped for, and that's saying something.
-----

A word about the elephant in the room (with some hints at spoilers, maybe?): Bill Willingham is known for his conservative politics, but I often find it difficult to find them reflected in Fables, even though some seem to have no trouble reading some right-wing message or other into various stories. In fact, I often find it fascinating to try to find a viewpoint that Willingham might be expressing through these stories, since what I do find tends to be pretty progressive (which probably stems from me placing my own biases on what I read). The big conflict in this final issue seems to be representative of cultural forces that have been at each other's throats for ages, but the final resolution looks for a way to avoid bloodshed, to put away past curses and move on. I don't know if you want to read Israel/Palestine, Republican/Democrat, or some other conflict into that, but whatever you choose, it's clear that both sides are represented fairly equally (although Rose Red seems to be the aggressor, but also the one who makes the conciliatory gesture that brings about peace), with neither one meant to be completely at fault. Instead, they're caught up in conflicts that extended so far into the past that the reasons behind them were almost completely forgotten, and only by recognizing their mutually assured destruction can they leave their grudges behind. Of course, the solution is to completely break contact and stay as far away from each other as they can, in order to ensure the safety of not only themselves, but anyone else who might get caught in the collateral damage. I'm not sure what that says about Willingham's take on any real-world situation, since we don't have multiple universes in which to distance ourselves from our enemies...

There's also an interesting bit in which Rose Red, who has been acting as a servant of the universal force of Hope, decides that Hope is actually a force for evil, leeching off everyone who has ever labored under the delusion that things will get better. This could well be a dig at Barack Obama's presidential campaign and what Sarah Palin has called "hopey changey stuff", and while I don't necessarily agree with the idea that hope is a negative concept, it's an interesting approach, looking at how what many perceive as a force for good might not be all that beneficial. This kind of stuff is what makes me enjoy this series, even if its worldview can be interpreted in a way that I find disagreeable. It's not didactic, forcing readers to accept a certain philosophy in order to understand what the story is about (like, say, Ayn Rand or Starship Troopers). Instead, it leaves things open to interpretation and debate, and it's all the richer for it.
Posted by Unknown at 7:39 PM