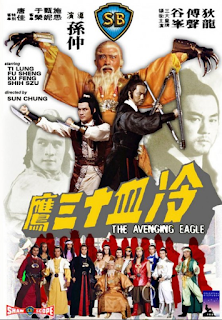 It's always good to encounter an awesome old-school kung-fu movie that I hadn't seen before, and if this one isn't considered in the top tier of the classic Shaw Brothers period, it should be. It opens on a man riding a stumbling horse through the desert, about to die of thirst. He gets rescued by a good samaritan who give him some water, but he's immediately suspicious, sure that the guy is a policeman trying to catch him. The guy assures him he's just another wanderer, but before too long, they are attacked by another group of riders who reveal that the first guy is named Chik Ming-Sing, he's a member of their gang who has deserted, and they intend to bring him back. After he fights and kills them, with help from the good samaritan, he reveals his backstory.

He was raised from childhood by the evil Yoh Xi-Hung, the leader of a gang of criminals and a vicious man who brought up a large number of children in a life of violence and bloodshed, training them to be fierce killers. The best of these he named his Eagles, and the 13 of them formed a formidable force that did his evil bidding as he sought money and power. Chik was one of the best of them, but in one raid, he was wounded, but managed to escape and pass out in a forest. He was found by a family who took him in, patched up his wounds, and nursed him back to health, which made him reconsider his whole worldview. This display of love and charity made him question his ruthless upbringing, but after recovering, he still went back to rejoin the Eagles.

However, immediately after his return, Yoh announced that they had discovered one of the remaining generals who had once imprisoned him, and he sent Chik and some of the other Eagles to kill him. And wouldn't you know it, it's the guy who's family nursed Chik back to health. Chik tried to stop them, but the other Eagles butchered the family, including women and children. Still, Chik stuck with Yoh and his gang, because they were the only family he knew.

Back in the present, Chik and his mysterious helper fight off some more of the Eagles, and he reveals that his ultimate goal is to track down one Cheuk Yi-Fan and die at his hand. In another flashback, he tells of how the Eagles were sent to murder the entire family of an official who was one of Yoh's enemies, but while the others gleefully killed everyone they could, Chik's heart obviously wasn't in it. The last person alive was the official's daughter-in-law, and Yoh, seeing that Chik was beginning to question his life of violence, forced him to kill her, even after she revealed that she was pregnant. Cheuk Yi-Fan, the official's daughter and the husband of the murdered woman, was absent at the time, so after Chik ran away from Yoh's clan, he swore that he would seek death at Cheuk's hand to balance the scales of justice.

At this point, the astute viewer will probably be able to determine the identity of the man helping Chik gain revenge on his enemies, but the ultimate reveal doesn't come until later, when the two of them decide to storm Yoh's stronghold and confront the villain together. This leads to an epic battle, as they fight off innumerable henchmen and confront Yoh himself, who, in the tradition of these sorts of movies, is the toughest foe of all, even though he is an old man. Things get especially dramatic when Yoh reveals that Chik's ally is actually his worst enemy and tries to convince him to come back into the fold so they can rule the criminal empire together, leading to a nail-biting, brutal finale of a fight that leaves Chik's ultimate decision to the very last second.

This is exactly I want martial arts movies to be: an operatic display of emotions as related through intricately choreographed violence, with plot twists and last-second reveals, men fighting for justice and villains receiving their gory comeuppance. The fights here are pretty great, and full of the wacky weapons that guys would carry around in old-school kung-fu movies, like spikes attached to chains, brass rings, weird hammers, short knives, and clawed gauntlets. Chik wields one of my favorite weapons, the three-sectioned staff, and Cheuk mostly fights with his bare hands, until he reveals that he has blades hidden in his shoes that attach to his armored wristbands. It's all pretty awesome, and it's beautifully structured in a way that leads up to that big, dramatic finale that's up there with some of the best cinematic martial arts fights ever. This one is a keeper, and one that belongs on the list of great martial arts films. I can't believe it took me so long to see it.
-----

Here's a very brief sample of the kind of thing you can expect to see in this awesome movie: