Jojo's Bizarre Adventure: It certainly lives up to the title 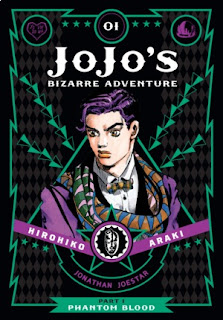 Prior to reading these two volumes, I knew very little about JoJo's Bizarre Adventure, having only read the spinoff graphic novel Rohan at the Louvre. I've been interested in checking it out though, since it's purported to be pretty nuts, which, as I now know, is a pretty accurate description. This manga is something that has to be seen to be believed.

While a portion of the series had previously been published in the United States, this is the first time the original volume of the series, which began in 1986, has been available here, and if it starts off this crazy, I can't wait to see where it eventually goes. At face value, it seems like a fairly typical shonen manga, with young men battling each other with impressive displays of physical and mental fortitude, wise mentors, loyal companions, a series of battles leading up to climactic encounters, and lots of angst, but Hirohiko Araki makes his particular weirdness known early on. From what I've seen of his work, one of his signature stylistic tics is characters contorting their bodies into bizarre positions, and sure enough, one of the first things the main antagonist does to demonstrate his villainy is kick a dog in what's either an anatomical improbability or a case of very extreme foreshortening: 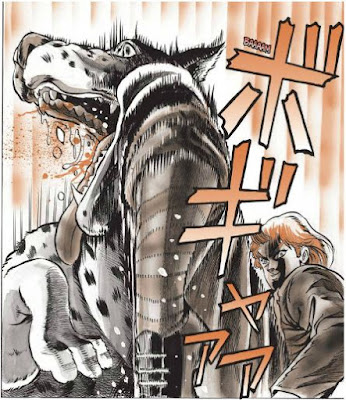 These two volumes are full of this kind of stuff, with characters moving their arms and legs into strange configurations, usually while emoting heavily. (Araki's other signature is incredibly weird fashion, but we'll get to that later.) One early fight scene is especially crazy, with our hero attacking his antagonist so ferociously that his body assumes Liefeldian proportions: 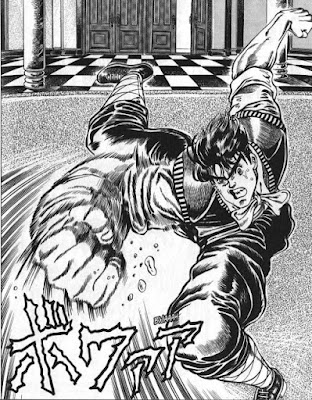 And when he strikes, the other guy's leg appears to telescope inside of his body: 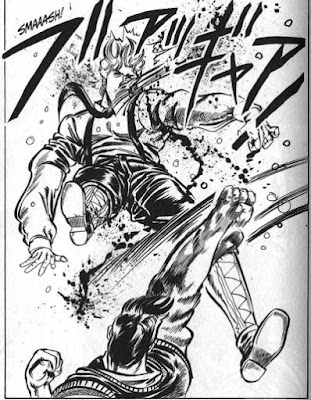 This sort of thing is kind of hilarious, but it's also an essential part of the book's appeal; with every page turn, you wonder what strange anatomy will pop up next.

Ah, but what about that story? While it seems to fit into a standard shonen manga format, it's got its own quirks and weirdnesses, including presenting a version of history in which the awesomeness has been dialed up to 11 (and then maybe another 11 for good measure), plenty of gory horror visuals, and as a method of fighting that makes no sense, but seems like a cool idea, so why not go with it?

Our tale begins with a prequel about an ancient stone Aztec mask that priests wore when making human sacrifices. When blood splashes on it, it shoots out tendrils into its wearer's brain, granting them terrible powers. Fast forward to England in 1868, when a thief decides to loot a crashed carriage. The man inside isn't dead though, and he wakes up thinking the thief is helping him out, so he offers him a favor in return. Twelve years later, the thief is dying, and he cashes in his favor by sending his son, Dio Brando, to live with the rich man's family. But when he gets there, he immediately sets out to ruin the life of the family's son, Jonathan Joestar, and claim the inheritance as his own. Oh, also, the father owns the stone mask, which will be important later.

Fast forward another seven years, and Dio is about to realize his plans, having spent that time tormenting JoJo while still claiming to be his friend. He's about to poison the father, but he's caught in the act by Jonathan, who is now strong enough to beat him up. Jonathan heads off to find an antidote for the poison, and while he's gone, Dio steals the stone mask, planning to uncover its secrets.

To get the antidote, Jonathan has to go to the bad part of London: a slum called Ogre Street, where Victorian street punks roam, ready to murder anyone they see. He's quickly accosted by a group of these weirdos, and their leader is a guy named Speedwagon who has what appears to be a razor-edged bowler hat: 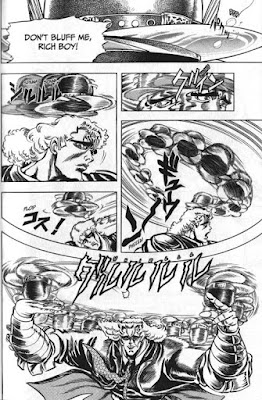 Jonathan defeats the punks, but he refuses to kill them, demonstrating that he is a true gentleman, so Speedwagon helps him find the antidote and decides to join him as a loyal companion, filling the role of the guy who gets freaked out by all the craziness happening around him and amazed by the hero's awesomeness.

While this is going on, Dio is wandering the streets, getting drunk on "Cronenberg Dead Zone" liquor: 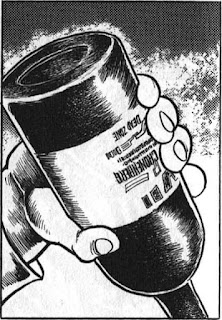 He decides to test out the mask's power when he gets in a fight with more of the toughs that apparently roamed the streets of 19th century England at night. He does so by putting the mask on one guy's face and stabbing his friend, causing blood to splash on the mask. It turns out that this grants the guy vampire-like powers, including incredible strength, a reversion to youth, and the ability to suck blood through the fingers after jamming them into someone's neck (or, as we later see, other parts of the body). Dio only manages to survive when the sun rises and he finds that these vampires also burn up in the sunlight. Armed with this knowledge, Dio heads off to confront the Joestar family, and sure enough, he dons the mask and gains its awful powers.

This leads to a pretty epic battle, as Dio easily destroys the cops which were there to arrest him, but Jonathan is so pure of heart and such a badass strongman that he manages to fight the ultra-powerful vampire to a standstill, and, as the family's mansion is burning down, pursues him with suicidal abandon in an attempt to destroy the monster. It's intense, ridiculous stuff, and we understand the stakes because characters are freaking out at the horrors Dio is capable of or Jonathan's heroic attempts to stand up to him: 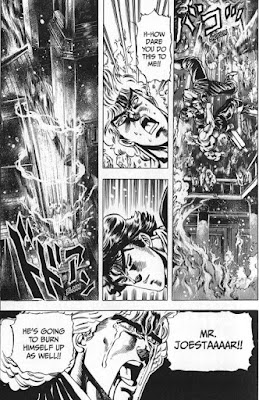 In the aftermath, it appears that Dio is dead, but we know it can't be over so soon, and sure enough, we learn that he survived and escaped to live another day, recruiting other villainous guys (including Jack the Ripper) to serve as his henchmen. Luckily, Jonathan gains a mentor to teach him how to fight such powerful enemies. That would be a weirdo named Zeppeli (named after Led Zeppelin, as Araki reveals in the second volume's backmatter), who first introduces himself to Jonathan by punching him in the solar plexus, which somehow heals his injuries: 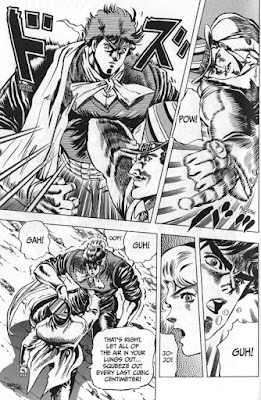 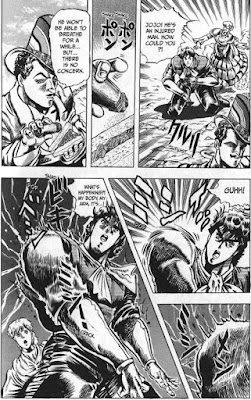 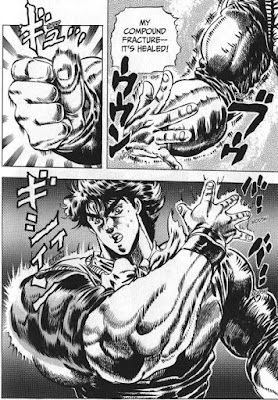 Yes, it's time to reveal the series' strange superpowers, which are based on breathing techniques called "Hamon" that send ripples through one's body, controlling the blood and granting amazing abilities. It's ridiculous and nonsensical, but so are pretty much any explanation for superpowers, so I choose to go with it and enjoy the bizarre explanations of each technique.

Jonathan, Zeppeli, and Speedwagon set out to confront Dio and his gang, which leads to more crazy fights, including one in which Zeppeli insists that Jonathan defeat a henchman without spilling any wine in the glass he is holding, as well as the revelation that Dio can resurrect zombies, including some knights who defended Mary, Queen of Scots from that dastardly traitor, Queen Elizabeth I (did I mention the strange take on history?). That's about it for these two volumes, with the third seeing the end of this particular storyline, but definitely not the end of the series, which I believe is still continuing today.

I don't know how well I'm conveying the sheer craziness of all of this, since the plot doesn't sound all that different from something like Dragon Ball or Yu Yu Hakusho, but it's the kind of thing that has to be experienced to understand. However, I can still highlight some of the particular goofiness, like the breathless narration that describes, say, the importance of sports in 19th century England: 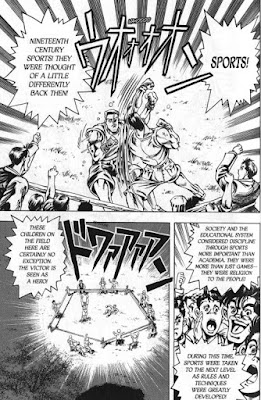 And aside from the aforementioned bodily contortions that the characters do, there's the build of the characters themselves. Araki mentions in the backmatter of the first volume that big muscles were in vogue at the time, with stars like Arnold Schwarzenegger and Sylvester Stallone ruling the silver screen, so he designed his characters in that mold, but he kind of went overboard, giving Jonathan and Dio huge barrel chests, tree trunk legs, and arms so massive that they seem unlikely to be able to move at all. There's a great scene midway through the first volume in which Jonathan and Dio compete in what I think is supposed to be a college rugby game, and it's one of those hilarious illustrations of strength in which a character simply cannot be stopped: 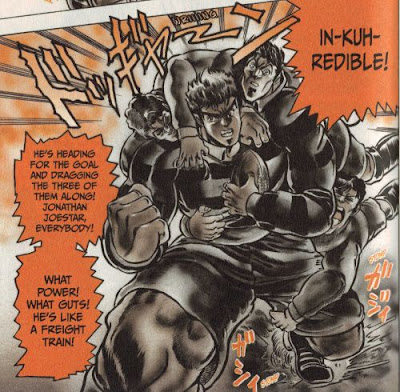 And then, of course, there's the insane fashions that Araki comes up with for his characters. This being the Victorian era, there are a lot of poofy collars, billowing sleeves, capes, and top hats, but Araki adds plenty of bizarre flourishes, like the feathers that adorn Dio's jacket here: 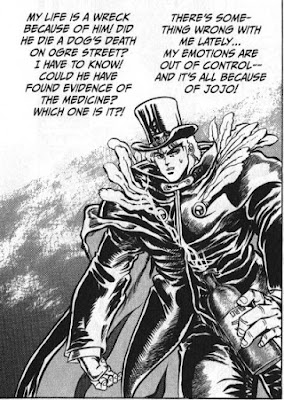 I also like this goofy cape/deerstalker hat/ascot/tiny bow tie/fingerless gloves/checked sleeves getup that Jonathan wears when he's going to confront the lowlifes in the slums of London: 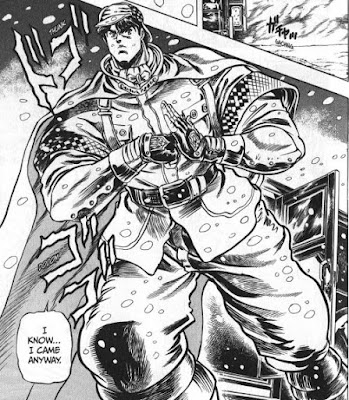 And this one is pretty crazy too, with it's high-waisted pants, loose belt, huge collar, sideways hat, and shoulder harnesses: 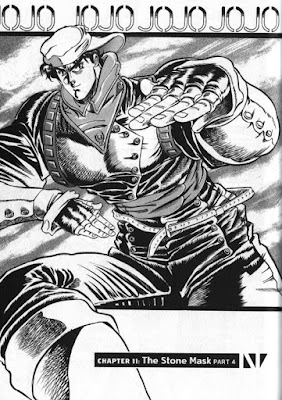 The whole series is full of these strange outfits, and it's fun to see what sort of crazy fashions Araki will come up with next. He often uses chapter intro pages to showcase these, and one definite highlight is the emphasis on the Britishness of the characters by emblazoning outfits with the Union Jack: 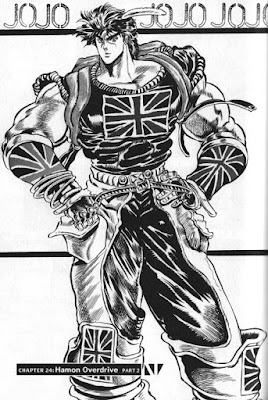 There's also the prevalent gore, which is strikingly nasty. Characters shedding a lot of blood and shrugging off the damage they take is a pretty common shonen manga trope, but Araki goes above and beyond here, with most fights leading to blood spraying all over the place and all sorts of gross bodily damage being inflicted on people. It gets pretty gross at times, with body parts being skewered: 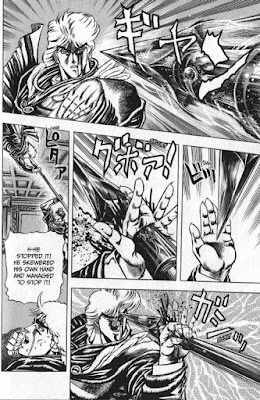 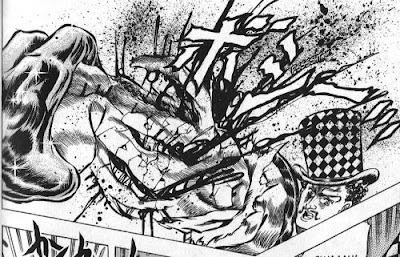 And skulls being casually shattered: 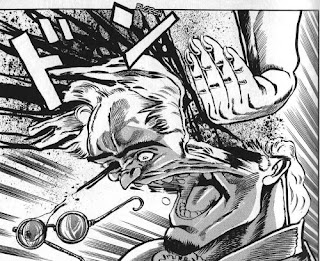 I don't know if all of those examples are enough to convey the insanity of this series; like I said, it really has to be read to be believed. The funny thing is that by the time I finished these two volumes, I found myself getting used to it. There was still the occasional moment of disbelief at the sheer craziness, but after immersing yourself in this kind of nonsense, you start to accept it. That's part of what makes it so fun to read, I suppose.

I'm certainly excited to read the final volume in this volume of the series, and then go on to whatever comes next. From what I understand, this is just the launching point for an increasingly lengthy and complicated series that spans multiple generations of the Joestar family and eventually leads to globetrotting adventures and ever-more-crazy powers and battles. If the whole thing is as wild and weird as this initial story, I'm on board for the whole ride.
Posted by Unknown at 1:48 PM