I Watch TV Too: I want MORE of Timeless (I suppose)

It's been several years since I wrote about a TV show on an ongoing basis, so here's the first installment of what will hopefully be a recurring feature in which I discuss at least one show that I watch: 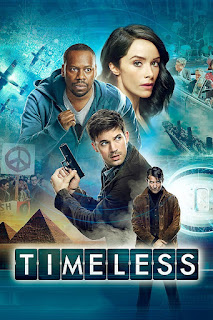 It's been a while since I've had a show that I enjoyed as something fun and kind of silly, without much in the way of importance on any real artistic level. Luckily, I'm kind of a sucker for time travel stories, and this show, which began airing on NBC this fall, pushes all the right buttons for that genre: recreations of the past that mostly focus on recognizable signifiers, people gawking at famous historical figures, characters recalling important details that help them in their adventures to the past, lots of hand-wringing about maintaining the sanctity of history, that sort of thing. And it's all wrapped up in a goofy ongoing plot about some sort of Illuminati-based conspiracy too!

So, the story goes as follows: some corporation invented time travel and immediately had their time machine stolen by some sort of evil mastermind who is out to destroy the United States by wrecking important historical moments. Luckily, they have a backup time machine on hand, so they recruit a young lady who is an expert in American history and a rakishly handsome special forces soldier, and along with one of the scientists who acts as their pilot, they get sent back to the past to foil the evil plots. That's your basic structure for every episode: the scientists track the bad guy's time machine, figure out what event they're going to screw with, and send our heroes to stop them. Rinse, repeat, enjoy.

And it has been pretty enjoyable, with the characters getting involved in events like the crash of the Hindenburg, Abraham Lincoln's assassination, and the Alamo, and interestingly, they've often ended up changing history, resulting in significant alterations when they return to the present. There's plenty of angst about whether or not they should try to change the past, but much of this is just a dramatic hook to hang the next action sequence on. They do at least try to make it compelling; the episode about Lincoln had some real emotional moments built around whether to let a great man die just because it's supposed to happen, along with a nice look at the plight of black soldiers who fought in the Civil War. It's all generally fun times, but the show does seem to want to struggle a bit with its themes, and maybe with American history as well (there's a nice moment in the pilot episode when Rufus, the time machine's pilot, says that as a black man, pretty much any moment in the past would be a bad one for him to visit).

But, since this is a TV show in the 2010s, there has to be an ongoing plot and some sort of shadowy conspiracy pulling the strings, and many of the early episodes have seen some menacing stuff going on around the fringes. The pilot, Rufus, had been tasked with providing intelligence on his fellow time travelers by secretly recording them and providing said recordings to his boss (British actor Paterson Joseph, who retains the aura of creepiness that he brought to his role as a cult leader on The Leftovers), and he's only doing so because some organization called Rittenhouse is threatening his family. In the first episode, Lucy, the historian, ran into the bad guy, Flynn (played by ER's Goran Visnjic), and he claimed that he's actually carrying out a campaign to bring down these same Rittenhouse people, and he's helped in his task by a journal that he received from Lucy's future self. So many secrets; when will our heroes ever find out about them?

Well, this week's episode answered that, as most everything was brought to light. During a trip to 1972 to recover the missing 18 minutes of Nixon's recordings (it turns out he's also afraid of Rittenhouse), all three main characters have their secrets revealed to each other, and now they're all rather mistrustful. But they also discover more about the Rittenhouse conspiracy, which seems to involve some sort of secret society that is so intertwined with American history that it's basically inextricable from the United States itself. Which may provide some interesting plots going forward; should they continue trying to stop Flynn each time he tries to ruin history, or should they team up with him? How can they use their exploits in the past to give them more power in the present? Will they ever stop whining about how they can't trust each other? We'll have to see, I guess.

But in the meantime, I'm sure there will be many more time travel adventures to go on. This episode had some enjoyable moments, like Lucy and Rufus getting in touch with Deep Throat (since we actually know who he was now) to try to extract some information about the Watergate burglary, or Rufus happening to know all about the relationships between the leaders of the Black Liberation Army so that he can convince them he's a member in order to recover something they were hiding from the Nixon administration (it turns out to be a person who knows a bunch of secrets about Rittenhouse, but for some reason nobody asks her to share any of that information with them, even though it would probably help them fight this evil conspiracy).

This show isn't exactly high art, but it's a pretty good time, with lots of action and at least some attempts to pay attention to historical details, even if those often take the form of interesting factoids that somebody can note on their current trip to the past. It's fast moving and goofy enough that you can usually just roll with it, even when some things don't make sense (where did Flynn get his army of thugs who are all too willing to accompany him to the past and get killed in the many shootouts that he has with the heroes?). Because why worry about the boring stuff when you can go on an adventure where you get to shoot a bunch of Nazis? That's what I'll be tuning in for each week; more of that sort of thing, please.
Posted by Unknown at 10:41 PM