Return to the 36th Chamber
Directed by Lau Kar-Leung
China, 1980 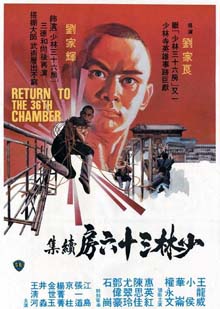 The 36th Chamber of Shaolin is one of the all-time great martial arts movies, cementing Gordon Liu into the ranks of the best kung fu stars and establishing a lot of the standard tropes about training sequences and Shaolin monks. This sequel-in-name-only is an odd way to follow up on that greatness, taking a much more comedic approach and only vaguely paying lip service to the original. But it's still pretty fun, even if it doesn't rise to the level of its predecessor.

This time around, Gordon Liu plays a goofball who poses as a monk to beg for money from people on the street. His brother, who works in a dye factory, starts having trouble with the management, who bring in outside workers and start docking everyone's pay, then threaten violence on anyone who tries to quit. The poor working stiffs (one of whom include a guy with some ridiculous-looking buck teeth) come up with a plan to have Liu pose as a Shaolin monk and confront the boss to tell him to treat his workers fairly. This leads to some goofy bits in which they help him pretend to use his awesome kung fu powers by throwing themselves around after he waves his arms at them:

This all backfires as expected when the boss, a guy with some actual martial arts skills, challenges him to a fight, and the resulting beatdown that everyone is given puts them in a worse place than ever. So, in despair, Liu decides to go to the actual Shaolin temple and get some real kung fu training so he can avenge his pals.

But, since this is a comedy version of the kung fu movie, he can't get officially admitted as a monk, so he has to try to sneak in to the temple, leading to lots of shenanigans as he pretends to be a monk, tries and fails to participate in the training, and gets repeatedly humiliated. But the wise abbot uses some lateral thinking and tasks him with building some scaffolding around the entire temple, with the ostensible goal of fixing the roof. This gives him the chance to not only build his physical skills, but also to watch as the monks train and come up with his own makeshift version of their techniques:

After spending something like a year working on this, he finally completes the scaffolding, so the abbot kicks him out, having seen that he has unwittingly learned everything he needs to know. He returns despondently to his hometown, feeling like a failure. Everyone is excited to see him, and they're sure he's going to use his new kung fu skills to avenge them, but sadly informs them that he didn't learn anything. But then he discovers his amazing reflexes, and realizes that he did learn kung fu after all, so he goes to confront the bosses at the dye factory.

And all this build-up leads to a pretty great series of fights, as he not only uses the standard punches and kicks to beat up the bad guys, but he also utilizes his scaffolding skills to tie guys up with strips of bamboo in mid-fight:

And then there's a final battle that takes place in a construction site, meaning that Liu has plenty of scaffolding and bamboo to use, giving him the chance to do stuff like this:

So, overall, this one is pretty fun, if not one of the all time greats. It's definitely on the goofier end of the spectrum, with lots and lots of humor that's hit or miss, and it takes quite a while to get to the good stuff, but the final series of fights is enjoyable enough that the wait is definitely worth it, especially when you've got a charismatic performer like Liu to watch throughout. And it's got some unique ideas; I love the way some of these older films would come up with techniques and fighting styles that fit the story and characters while still feeling dynamic and exciting. And there's also plenty of the old standby stuff, like the way the bad guys' weapon of choice in the final battle is those stools that people were always using to fight with in old-school kung fu movies.

I'm always up for a classic Gordon Liu movie, and this one was definitely worth checking out. I wouldn't recommend it for first-timers, but if you're looking for a fun bit of Shaw Brothers chop socky, you could definitely do worse.
Posted by Unknown at 2:01 PM