I Watch TV Too: Out of time 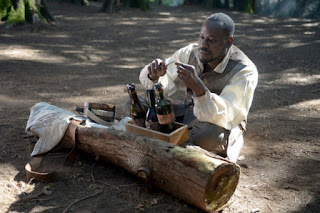 As I've stated, I enjoy this show, but it's not exactly good. That is, it's fun when it gets into rollicking time-travel adventures, but it's at its weakest when focusing on interpersonal drama between its characters. But while this episode does feature some of the latter, it balances it out with a decent amount of the former, enough so that I'll call it a win.

I suppose some focus on the characters was necessary after the big revelations in the previous episode, which set the main trio of the show at odds with each other as they all found reasons to be distrustful of one another. So, this episode sticks them in multiple situations in which they have to figure out how to work out their differences, which is fine, but neither the writing nor the acting is strong enough to justify the time spent. This means that we have to suffer through some interminable conversations about how they have to learn to work together and all that jazz.

But luckily, the rest of the episode has some fun stuff. The team pursues their nemesis, Flynn, to Pennsylvania in 1754, thinking he's going to try to change the outcome of the French and Indian War or something. But it turns out he has something more dastardly in mind: sabotage of their time machine in hopes of causing them to get stuck in the past with no way to get home. Oh no!

Luckily, our heroes are resourceful, so they come up with a ridiculous plan to sneak into a French fort and steal some supplies so Rufus, the team nerd, can cobble together a capacitor and get the ship working well enough to jump back to the present. This is pretty ridiculous (not that I've looked into the science or anything, but replacing circuitry with some bottles and flattened tin seems suspect), but it's one of those things that sciencey guys can do on shows like this, so we'll go with it.

And they also end up having a series of adventures on the way to their destination, including being captured by both French troops and Native Americans, with the latter providing one of the more dramatically ridiculous moments of the episode when Rufus somehow convinces them that he's not a slave and he'll put his life on the line to free his friends. This scene also gives us the requisite brush with history, as Lucy gets excited to meet their chieftess, Nonhelema (who has a surprisingly good grasp of modern English slang), but doesn't get the chance to explain who she is. Maybe they just didn't have time for the exposition, but it was kind of nice to have a character acknowledge that this is somebody notable without giving us a synopsis of their term paper about them.

And along with the historical shenanigans, there's also some drama in the present as the team of time-travelers try to send a message to the future through a time capsule, which gives Gia, the mousy (in Hollywood terms) technician who Rufus has a crush on, the chance to angst about her relationship with Rufus and eventually use their shared history of incredibly obvious sci-fi fandom references to interpret the message he left that will help them get back to the future. It's an example of a bit of writing that doesn't make sense (why would he leave such a cryptic message?), but as a way to develop character relationships, it works much better than the dramatic scenes between the three leads.

So, sure, the show is still fun. It's got time travel adventure, action, technobabble, and lots of ridiculousness (my favorite thing this episode was when our heroes were trying to hide from French soldiers and they just kind of wandered around in the forest without checking to see if they could be spotted). I'm still on board, although this focus on interpersonal drama might wear me down at some point. But as long as there's stuff like people dressed up in tri-corner hats and breeches and guys using blacksmith equipment to fix a time machine, I expect I'll be enjoying what they've got to offer.
Posted by Unknown at 9:27 PM