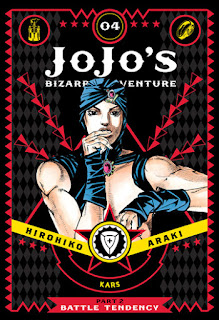 So here's another volume of classic manga craziness, so, since this series has defeated my abilities to offer much in the way of cogent analysis, get ready for another recap of the madness contained within. Let's get started!

The previous volume ended with Jojo and his mentor Lisa Lisa about to confront the evil Wamuu and Kars following the heroic death of their ally Caesar. But they soon discover that the bad guys have created an army of vampires, including this guy: 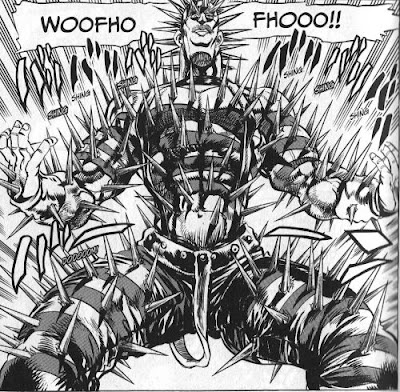 But even though our heroes are outnumbered, they manage to bluff their way into a pair of one-on-one duels, since they still have the magical gem in their possession that will grant their foes untold power. They agree to meet at a nearby location called Skeleton's Heel, which is a Stonehenge-style stone circle (in Switzerland, because this series' grasp of history and geography is rather tenuous) that also doubled as a chariot-racing arena in Roman times.

In case you're wondering if that means what you think it means, here's what appears as soon as Jojo shows up for his scheduled fight: 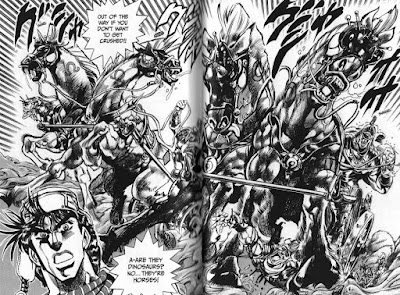 Yep, that's right: it's time for a chariot race with vampire horses! That sounds pretty awesome, and it quickly turns into a classic shonen manga battle, with rules about weapons being deployed by being hung on pillars throughout the track. Jojo manages to get an early lead due to some trickery, but the early advantage he gains by obtaining a giant sledgehammer is quickly undone when Wamuu does this: 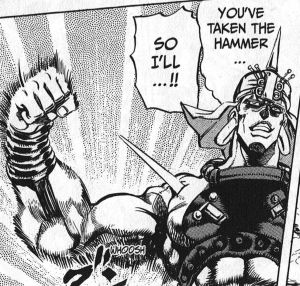 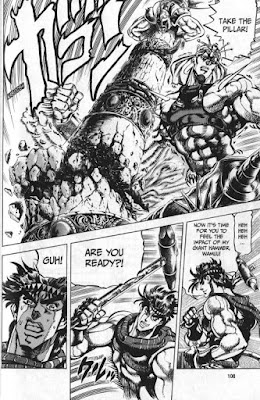 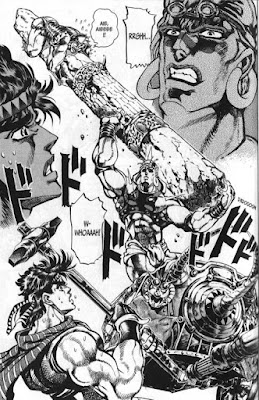 The fight soon turns into one of those affairs where each guy uses some awesome move against the other, only to find that his opponent has foreseen it and come up with a counterattack, but then the original guy has a counter-counterattack ready, and so on. We seem to reach a turning point when Jojo uses his Hamon super-breathing powers to basically rip Wamuu's arms off: 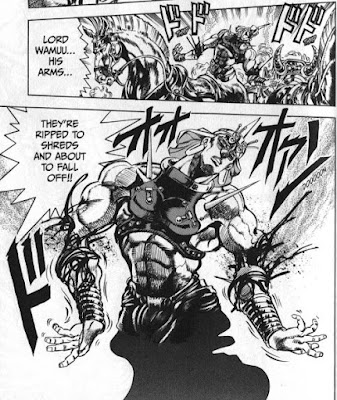 But Wamuu uses an awesomely dramatic technique to power through the pain: 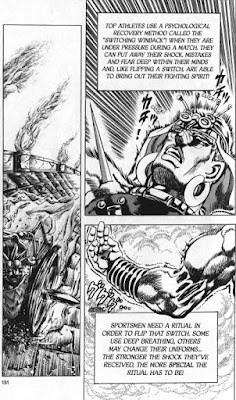 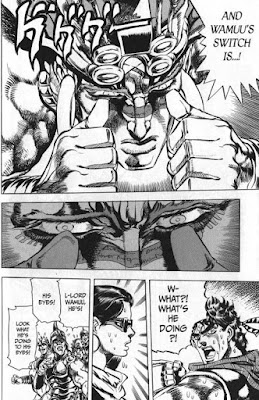 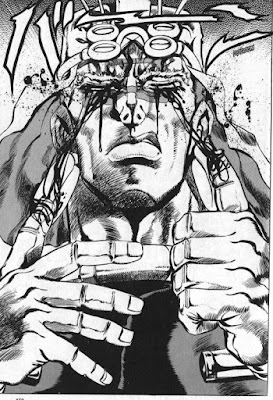 Sure, why not? Blinding himself apparently also heal's Wamuu's wounds, and he extends a unicorn horn that he can use to sense vibrations, Daredevil style, and keep going. After more fighting involving super-powerful crossbows and meticulous ricochet skills, Jojo seems to have delivered a killing blow, but Wamuu doesn't go down easily: 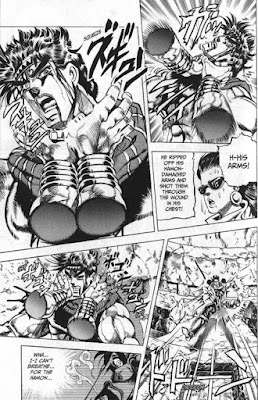 Yep, even with his body disintegrating, he keeps attacking using awesomely weird moves, including a suicide maneuver in which he sucks large volumes of air into his lungs and shoots it out with a laser focus, threatening to decapitate Jojo. But Jojo manages to come up with a counter that basically explodes Wamuu's body, leaving only his head to finish off. Which Jojo does, in a surprisingly merciful fashion: 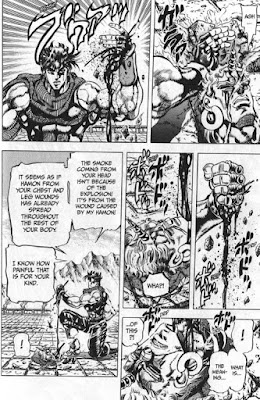 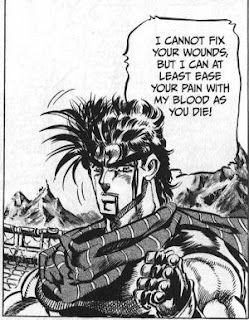 Yes, it's all about respect between warriors, that most classic of shonen manga tropes. The other vampires don't see it that way though, and they try to attack, giving Wamuu the chance to make one last awesome attack: 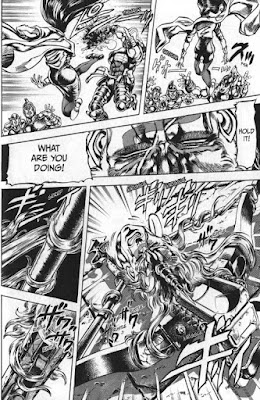 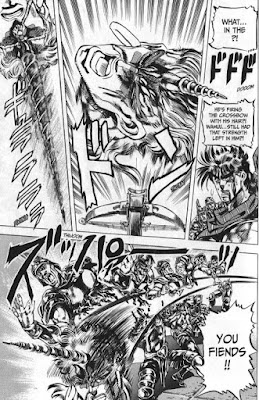 After all this nuttiness, it seems like there's almost no way for the big climactic battle with Kars, the leader of the Pillar Men, to top it, but it ends up being epicly dramatic, involving the revelation of the secret connection between Jojo and Lisa Lisa (spoiler: she's his long-lost mother), the last minute arrival of Nazi cyborg Stroheim to lend some help, Kars becoming the "ultimate being" and gaining the power of all life on earth, and one last final plan by Jojo that involves flying a plane into a volcano. It's pretty amazing stuff.

However, I've shared enough images, so more of my breathless "and then this happens" descriptions can only dull the brain-melting effects of experiencing this manga. Just know that it's crazy and awesome and full of so many bizarre things piling on top of each other that the only possible response is to just hang on for the ride.

Of Hirohiko Araki's various artistic tics, I was disappointed that there weren't very many chances for crazy outfits in this volume, although I did like Wamuu's battle garb, which consists of a bulging, jeweled loincloth, some sort of bicep guards, and a vest pinned to his chest with knives: 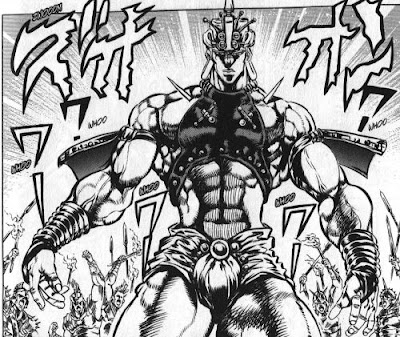 There's also this goofy chapter-opening illustration of Jojo wearing what appears to be four hats that have been loosely stitched together: 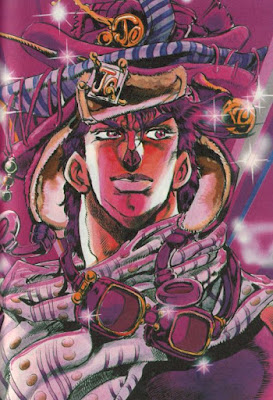 And I also caught several appearances of one of Araki's weirder anatomical impossibilities that he keeps returning to (I mentioned it all the way back in part 1, volume 1 of the series) in which a character gets hit so hard his legs seem to get shortened: 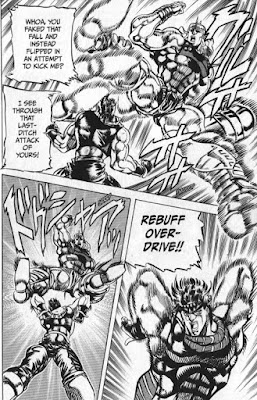 Note that that page also includes Araki's weird sense of scale, in which it's hard to tell how big characters are actually meant to be. Is Wamuu really supposed to be three times as tall as Jojo? Maybe it's just exaggeration, but it works to make the series feel strange and unearthly, the kind of story where literally anything can happen (and often does).

So, as of the end of this volume, the series seems to finally make its way to the present (that is, the late 80s), and part 3, Stardust Crusaders, kicks off with what is sure to be more awesomely nonsensical fighting. I can't wait to read it.
Posted by Unknown at 12:51 PM