The Black Dahlia: She's not ready for her close-up 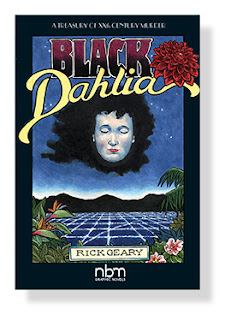 True crime seems like a genre that would be perfectly suited to comics, but there don't seem to be too many examples of it, at least not in the English-language comics scene. But maybe that's because Rick Geary has got the market cornered, first with his "Treasury of Victorian Murder" series and now with his ongoing "Treasury of XXth Century Murder" books. Between the two series, that's more than 15 books of impeccably-presented tales of people meeting their gruesome ends, and it covers some of the most famous cases of the past couple centuries, giving readers pretty much all the information they need to know about these examples of human nastiness.

Actually, that might be selling Geary short. His books aren't just basic recitations of facts with competent illustrations; they're detailed examinations of events that cover as much as possible in around 80 pages, examine the relevant personnel, and place these events within the proper perspective, filling in whatever details about the time and setting are needed to understand what captured the public attention and continues to make them intriguing. While some salacious details are provided, Geary makes implication go a long way, keeping most of the gory imagery off the page but still providing a sense of realism. I love the way he gives things a sense of the mundane, making the players seem like everyday people who got caught up in something larger than they ever expected. 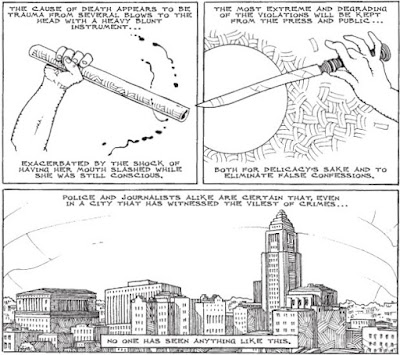 This particular case gives him plenty to work with, featuring a young woman's mutilated body found in a vacant lot outside of Los Angeles in January of 1947. Some investigation reveals that her name was Elizabeth Short, but while dozens of men were questioned, the killer was never found, and the horrific nature of the murder (she was beaten and had her face sliced open, and the body was cut in half) almost defies comprehension. Geary brings up several possible explanations, including that she might have had mob connections or that there may have been a serial killer who preyed on several women in the area throughout the 1940s, but none of it is satisfying, which is the nature of many of these true crime tales, and a probable element of why they continue to be so compelling.

But Geary does give as complete a picture as possible, delving into Short's troubled history as a would-be model and actress who bounced between her hometown in Massachusetts, Miami, Chicago, and southern California, developing relationships with a string of men but never able to find the right guy to settle down with and eventually getting involved with some unsavory characters in LA's underworld. Geary makes her into a sad character, someone who is never able to realize her dreams, but she still feels painfully human, undeserving of her awful fate.

And as usual, Geary brings it all to life with fascinating detail. He has a knack for giving people a homely look, the kid of person you would expect to encounter on the street, but they're all individual, unique people, everyday Joes and Janes lost in the sea of humanity, only standing out due to their proximity to events that we're still trying to reckon with. 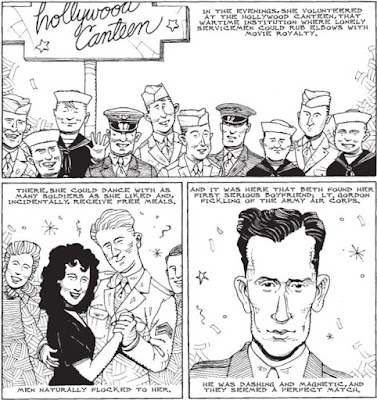 And he also does his usual great job of filling in the settings, which here consist mostly of the palm-tree-lined streets of Los Angeles, but also include a variety of hotels and nightclubs. I like the way he gives many of these places an art deco feel, evoking the era without being too obvious about it. 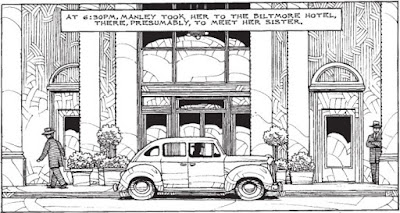 So, all in all, it's what you would expect from someone who has gotten to be a real pro at this sort of thing. I don't know if I feel especially enlightened by what I've learned, but that's to be expected. Cases like this are famous due to their incomprehensibility, but they're still intriguing because they involved real people, and Geary is able to capture both the realism and the mystery, tying it all up in one succinct package. If you're looking to immerse yourself in some of the uglier moments of recent human history, you're not likely to find a better guide. Just don't expect to gain much understanding of humanity along the way.
Posted by Unknown at 9:03 PM