No new comics this week, so here's something else to talk about:

Sometimes you hear about a comic that's really good, but by the time you're interested, several issues have come out, and you figure it's best to just wait for the trade.  But then the series seemingly disappears for a couple years, making you think it's never going to get finished and will only be available through back issue searches, only to show up unexpectedly on a schedule again to finish in a sort-of-unplanned manner, and even get collected a few months later.  Well, that happened once, anyway, with this series, and now that I've finally been able to read the whole thing, it was totally worth the wait.  What a fascinating comic; if I had my way, this is what a whole lot more mainstream books would be like.  It's kind of tangentially a superhero book, but it's much more character-based than most of them, with nary a costume in sight and more emphasis on crime, society, politics (whether governmental or in other organizations), and friendship than crime-fighting.  In fact, the usual superhero stuff is nonexistent in this world, in which the creation of super-powered soldiers in Russia during the Cold War has led to the proliferation of gangsters, soldiers, and policemen with super-human abilities, although they seem to ignore them for the most part and just focus on their daily lives instead.  That means we get to follow Kris Kalenov, a Moscow police officer, as he investigates the kidnapping of a young girl who turns out to be the recipient of a liver transplant that granted her some of those special abilities.  He ends up going to New York and infiltrating some gangs there, then returning to Russia for a standoff in a remote military base, and when he finally finds the kid, the book is only half done.

That might be the point at which the series started experiencing delays, since it seems a bit off throughout the rest of the book.  One issue is a sort of "day in the life" story that follows Kris and his gangster pal Nikki (also an ex-super-soldier) around Moscow taking care of police business, then the plot veers off in the direction of a growing mystery about who is behind the governmental upheavals that had been going on in the background and an eventual confrontation with a diabolical mastermind.  The final special issue, which came out early in 2009 to finish off the series, opens with Kalenov saying "My little friends, I thought I would have more time to tell you how things ended up. But perhaps for now I will just tell you the good parts", and then brings in a major character who probably should have had more on-panel time before playing his part in the plot.  Still, it all wraps up quite satisfactorily, and it works really well despite its rocky road to completion.

The real reward here is more about the journey than the destination; just seeing the characters move through their fully-realized world is a wonderful experience. Lewis' dialogue style is quirky and enjoyable, sounding like the characters are speaking English with a Russian accent, with lines like "What is this, the 'standing around' holiday?" or "Do you imagine this childcare to be inexpensive?".  It works as a sort of emphasis that this is a foreign land, not the normal Western world readers are used to.  And John Paul Leon's art is gorgeously detailed and shadowed, with every panel feeling like it captures a real place, from snowy urban streets to cluttered junk shops to the halls of political power.  It's pretty amazing work, with characters that move and emote realistically, behaving like recognizable people.  They're characters that I want to spend more time with, and was sad to have to say goodbye when the story ended.  That's the mark of a damn good book.
-----

While some books live up to their hype, others fail to meet the expectations after having praise heaped upon them, and unfortunately, that's the case with this story, which was originally serialized in a seven-issue miniseries, but probably reads a bit better as a whole rather than separated into individual chapters.  Joe Kelly can be an idiosyncratic writer, and it shows here, but while he fills the book with fanciful flourishes, his plotting is very straightforward, relating a relatively simple story but obscuring its center until he can reveal an emotional core.  It's pretty baldly manipulative, but it works pretty well for what it does.
That said, it would probably be a bit better without high expectations; in the end, it's kind of a banal look at a child dealing with the idea of death, dressed up in a fantasy metaphor that actually exists as a metaphor in the story itself.  That is, the main character, a quirky middle-schooler named Barbara, claims to be a hunter and killer of giants, with those monsters standing in for the ever-present spectre of death which she is dealing with at home.  The circumstances of her home life are hidden from the reader, leaving open the possibility that her fantasies are real, but it's obvious that she's suffering from some sort of tragedy, and the reality turns out to be kind of commonplace.  Sure, it's unfortunate, but it's not exactly extraordinary, and the way Kelly builds it up over the course of the book, even blacking out the text in word balloons in which characters refer to it, the truth turns out to be a kind of a letdown.  Although, if one tries to put themselves in the mindset of a pre-teen going through this, the level of drama is not inappropriate.  But the secrecy does oversell it, and depending on the reader, it might be too much.

In fact, said secrecy might obscure the rest of the story, which is a shame, since it's full of personality, both in the lively characters and the way they are depicted.  Artist JM Ken Niimura takes a somewhat manga-style approach, but it's much more sketchy and unfinished-looking than anything you're likely to see from Japan.  The art is clean and simple, except in the fantasy elements, which are suitably monstrous in the case of the victims of the title, and cute and silly in the goofy miniature fairies and creatures that Barbara sees everywhere.  Niimura also gives Barbara animal ears (with the species changing regularly), which seems inexplicable at first, until you realize that they're not meant to actually be visible.  The book is full of that sort of thing, and Kelly and Niimura really bring the relationships populating the story to life, and do their best to sell Barbara's predicament.  The fact that they mostly succeed certainly makes the book worth reading, but it's probably not going to change your life or anything.  There's nothing wrong with solid entertainment though; let's enjoy it where we can find it.
-----


A.D.: New Orleans After the Deluge
By Josh Neufeld 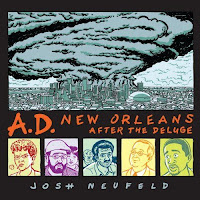 With this book, which was originally serialized online at Smith Magazine, artist Josh Neufeld did a ton of research about the 2005 Hurrican Katrina tragedy, and he relates some fascinating stories here following several individuals and relating their experiences.  Unfortunately, he also spends time with people whose stories aren't as compelling, making for an unbalanced read.  In an afterword, he states that he wanted to show how people from all walks of life were affected, and while that's a nice idea, it becomes obvious a portion of the way into the book that two of the five storylines, both of which follow people who stayed in the city and survived, are the interesting ones, and any time spent with the others is less worthwhile.

The real compelling material here sees a woman named Denise who spent the night of the hurricane alone in her apartment, and then was stranded with her family in the New Orleans Convention center along with a massive crowd who felt like they were being left to die by those in charge.  Elsewhere, an Iranian man named Abbas stayed in the city to mind his store with a friend while his family left for safety.  Between these two stories, we see what things looked like from the ground level, and everything else is little more than a reiteration of what the rest of the country saw on TV.  It's a shame that one character lost his comic book collection in the flood, but compared to having an old woman die in the street next to you (which happened to Denise), it's not as poignant as it seems like it's supposed to be.  It seems like Neufeld's intentions led him astray here, which is unfortunate, since the street-view material is so good, and nearly everything else distracts from it.

It might be the serialized nature of the comic that was the issue here; the project started one way, following the selected characters, and Neufeld was stuck with it throughout.  It's unfortunate, and the way the book ends, by jumping forward a year and a half from after the hurricane and its immediate aftermath, seems to leave out too much.  It's too bad; with more planning, this could have been a great bit of journalism.  As it is, the quality peeks through, but it's hidden by material that didn't need to be told.  It's not terrible, but it could have been better, and that's a shame.
Posted by Unknown at 9:01 PM