Essex County: I'm late to the party, but I'll still wear a lampshade on my head

Elsewhere: I reviewed Strange #2 at Comics Bulletin. No TV reviews this week, since neither show I write about had a new episode. Sorry, Brady-addicts.

Links: One Patrick Wensink informs me that he is having a coloring contest using images from his book, Sex Dungeon For Sale!, and one of the prizes is an autographed copy of Michael Kupperman's Tales Designed to Thrizzle collection. So go enter!
Check out the awesome Paul Pope illustrations for a GQ article about Japanese concept cars. Hey, wasn't Battling Boy supposed to come out this year?
I really liked this fumetti piece starring Harvey Pekar at the Graphic NYC blog. Good stuff.
Okay:
Essex County
By Jeff Lemire

Jeff Lemire has been getting a lot of acclaim over the past few years, and with this brick of a collection of his breakout series, it's easy to see why. Some (your not-necessarily-humble critic, for one) might have balked at his work, unsure about the odd artistic style, but once you dive into the stories here, it's easy to get lost in Lemire's world of placid settings and crushing loneliness. And while his intimate storytelling style might have gripped readers and plunged them into the lives of his characters in the single volumes, having them all smashed together really brings out the intricacies of the interconnected relationships and long-term plotting; it all ends up seeming like more than the sum of its parts, which, considering the affect those parts have had on readers, is really saying something.
Lemire starts out small with the first third of his trilogy, Tales from the Farm. It follows a young, orphaned boy who is struggling to deal with the death of his mother and the lack of a father figure throughout his life. He chafes against the unsure guidance of the uncle in whose care he was left, gravitating instead toward the hulking neighborhood gas station attendant, another lonely soul who once had a chance at glory as a pro hockey player before an injury sidelined him permanently. He's not helped either by a superhero comics obsession that leads him to wear a mask and cape everywhere he goes, but this does allow some escape through flights of fantasy.
The second book, Ghost Stories, sees a pair of hockey-playing brothers leave the rural county of the title in order to play in the minor leagues in Toronto, briefly finding a bit of athletic glory before managing to alienate each other and remain apart for most of the rest of their lives. The story is told in flashback, narrated by the lonelier of the brothers as he struggles to understand his surroundings when dementia sets in, causing him to confuse everything he sees with some moment from his past, adding an additional layer of poignance to the already-sad story of a lifetime of regret.
Finally, the third volume, The Country Nurse, ties everything together, revealing the deep connections between the first two sets of characters and allowing for a bit of closure, if not exactly a resolution. Lemire gives us two storylines here, with one in the present following the title character as she makes her rounds, inserting herself into others' lives and meddlesomely trying to help with their emotional issues, while still dealing with her own, which involve a dead husband and a rebellious son. This is intercut with a flashback to nearly a century before, as a nun who oversees a remote orphanage must lead her young charges through the snowy wilderness after a tragic fire; could they end up being the ancestors of all our present-day heroes? This wraps everything up in a possibly too-perfect bundle, but it does point out that there's no need for the loneliness and isolation these characters all force themselves into; they've got something in common, as does everybody on earth if you go back far enough.
The whole, huge tapestry ends up being a sad ensemble piece, with the first book setting the tone for the series early, and the rest of the stories continuing in a similar vein. Lemire catalogues myriad variations of poignant isolation, usually self-inflicted. But this is no simplistic, surface-only wallow in various bits of sadness; Lemire manages to make all the characters feel achingly real, through glimpses of their thoughts, examples of the way they go about their lives, flashbacks to revelatory moments, and interactions with each other that demonstrate their halting desire for connection. It's a very impressive example of character architecture, with the reader immersed in these people's lives and feeling transported to a very specific setting and emotional state.
That artwork, which is certainly uniquely idiosyncratic with its square noses and spindly, elongated limbs, ends up working wonderfully to define the setting and characters, and brings a surprising specificity of emotion to life along with wide-open landscapes that match the emptiness that everyone seems to feel. It might look somewhat crude at first glance, but the sketchy raggedness of the lines hides a firm grasp of technique that eventually leads to some astonishingly effective moments.
The second volume, especially, sees some wonderful, powerful scenes in which emotion is laid bare on characters' faces and Lemire comes up with beautiful artistic techniques to convey memory. The elderly Lou watching a key moment from his past play out as if he's just another observer in the room is heartbreaking: 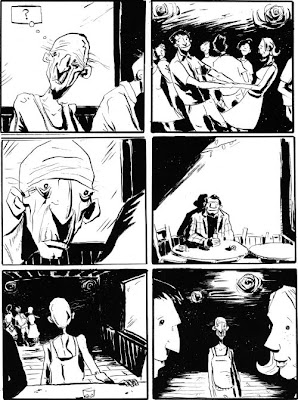 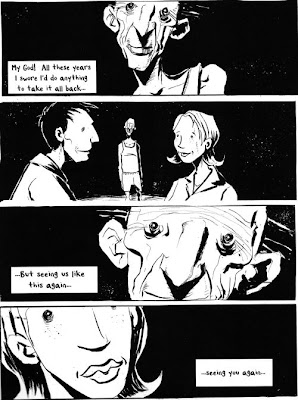 And a bit of tearful recall at a moment of childhood happiness is equally sad: 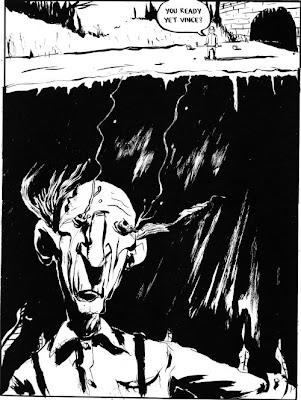 Lemire returns to bravura artistic moments like these several times throughout the series, but he's even more effective at simple conversations, in which inner pain simmers behind his characters' eyes: 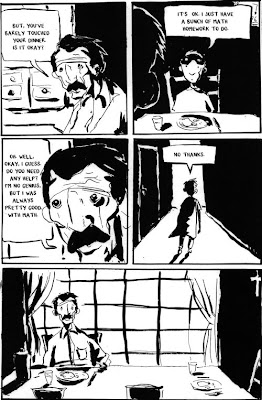 I've only scratched the surface here; there is much emotional richness to be encountered within these covers. Lemire has his own style of art and storytelling, but it's a pretty incredible one, able to work wonders to bring people to life, making us care about them and want happiness, forgetting that they're simple lines on paper. That's the mark of a great storyteller, and it's obvious that Lemire should have a long, fruitful artistic career ahead of him.
Posted by Unknown at 10:40 PM