Elsewhere: I reviewed Punisher #12 at Comics Bulletin.  That's part two of the "Franken-Castle" story, if you didn't know.

And for today's Japanese bizarreness, Rich Johnston has posted a couple pages from an Alan Moore themed fan-comic, which reimagines the Magus as a Japanese schoolgirl.  Japan.

I missed this when it started, but Oni Press has been running a prequel short story (read it here in reverse chronological order) to Cullen Bunn and Brian Hurtt's upcoming fantasy Western series The Sixth Gun.  It's prose, with illustrations, and two bookend comics pages, and now I'm excited about the series all over again.

Hmm, Christmas apparently isn't conducive to a regular posting schedule.  Let's see if I can get caught up:

You'll Never Know, book one: A Good and Decent Man
By Carol Tyler 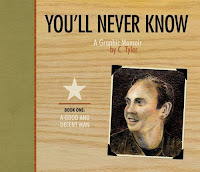 The list of excellent graphic novels released in 2009 seems to grow with every other book read, and this particular entry is one that stands out even in its crowded field.  Carol Tyler really makes a name for herself with this "graphic memoir", as the cover calls it, demonstrating an incredible grasp of storytelling structure and a layering of personal and historical incident into a complex, cohesive whole that illuminates her own life along with her subject's.  It's an impressive achievement, and as the first volume of a projected trilogy, it's indicative of the quality to come.

As for that subject, it's a fascinating one, an intimate, warts-and-all portrait of Tyler's father, one Sgt. Chuck Tyler, who served in the Army in World War II.  As with so many of the "greatest generation", it's essential to record their stories while they are still with us, and Tyler does a wonderful job of it, weaving her own history into the tale, along with some contemplation on how her father's history and their relationship affected her own life, especially her relationship with her husband, who had separated with her during the creation of the volume, causing her to be especially reflective on the subject.

This makes the book a sort of rambling, nonchronological discourse on her father, jumping around to different points in his life, with regular breaks for Tyler to relate what is going on with her and her teenage daughter and detail how her father came to tell her the story in the first place, which is important, since she tells how he was reticent to even talk about his wartime experiences at all for as long as she could remember.  The whole thing (or this first third of it, anyway), ends up having the quality of a tale told by a master storyteller, who makes the telling of the story and the circumstances surrounding it as important as the story itself.

That might be because the meat of Sgt. Tyler's war experiences are yet to come; as of the end of this volume, he still hadn't seen much action, spending most of the story talking about being stationed on a base in the U.S., courting his future wife, and working as a plumber in North Africa; he eventually went into Italy and Germany, and apparently had some difficult experiences that affected him for the rest of his life, but we'll have to wait to hear about that.  Instead, we learn about his time growing up, the beautiful love story between him and Tyler's mother, and many of Tyler's memories of him as a father.  It's a wonderful portrait of a complex human being, and after reading just this one volume, readers will feel like they know him, no matter what the title says.

All this would be quite nice on its own, but Tyler's gorgeous artwork really completes the package, bringing an aura of sensuality to every scene, whether it's an aside about the layout of her house or a detail from her parents' memory.  The way she conveys movement is amazing, with images flowing across the page and directing the eye through the panels even when they're full of captioned text, and really capturing emotions at the same time, as in this scene in which she recalls her father taking her to a school dance: 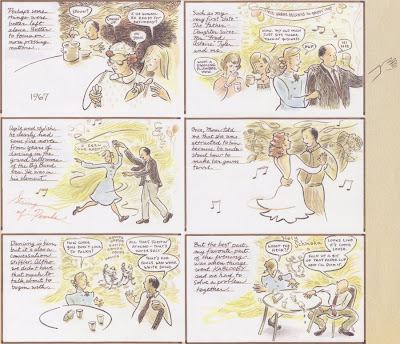 She packs the panels with information, often pointing out details with labels and arrows or adding swirls of colors to represent emotion.  She makes use of the entire page, with artwork extending outside of the panel borders and stretching across the gulf between pages.  This story doesn't sit still; it keeps moving, one scene flowing into another and one memory evoking certain emotions and vice versa.  The sections in which she attempts to create a sort of scrapbook retelling of his history might be the most restrained portions of the book, but they're fascinating nonetheless, with the description of how her parents fell in love possibly being the most arresting part of the story:

The whole thing is beautiful and gripping, and it's obvious that Tyler cares for her father and wants to capture the full extent of her emotions concerning him.  That seems like a tall order, but she manages to do a remarkably real-seeming interpretation of her thoughts and feelings, whether in the awed reverence of everything he's seen in his lifetime: 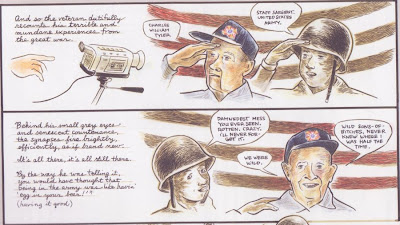 Or the remembrance of what an accomplished man he was, especially in how technically capable he was with carpentry and plumbing: 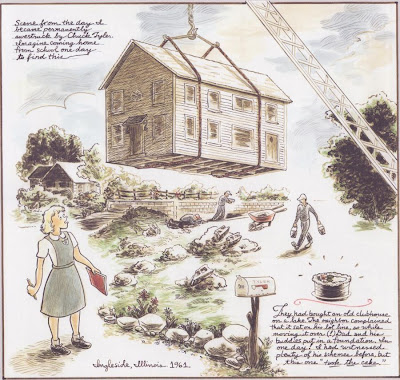 Tyler never stops laying on the detail, but she doesn't overwhelm the reader either.  She has a perfect control of pacing and structure, and the book holds together as a pretty amazing whole, full of personal reminiscence, diaristic self-examination, and attempts to capture a history that doesn't just seem like a random accumulation of memories, but a full portrait of a person and his life.  That's a pretty great accomplishment, and if Tyler wasn't on readers' radar before, she definitely should have everyone's attention now, since she's got talent to spare.  The next two installments of the story can't arrive fast enough.
Posted by Unknown at 10:26 PM