The Photographer: Human tragedy is awful, if occasionally self-inflicted

Elsewhere: I've got a review of SWORD #2 up at Comics Bulletin. Enjoy. 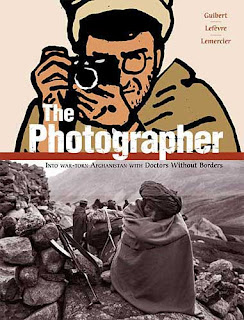 While fiction can be a great source of ideas and characters and plots, there's a reason real-life stories are so compelling. The accumulation of un-fakable details, relatable emotions, and plain old truth is something that hits readers close to the heart, pulling us in in a way that a fabrication can't accomplish without a lot of work. That doesn't necessarily mean that everyone has an important story that the world needs to hear (hence the perpetual backlash against "indie autobio comics"), but when a creator can educate on an important subject and inform readers about lesser-known areas of the human experience, the reality of what they experienced has undeniable power.
And that's exactly the case with Didier Lefevre, the photographer of the title who participated in a mission to Afghanistan with Doctors Without Borders in 1986, during the decade-long invasion of the country by the Soviet Union. As one would expect, it's a fascinating tale, full of detail about every step of the journey, dropping readers right into his shoes as he experiences severe culture shock, watches heroic people work themselves to the breaking point to help their fellow man, and comes terrifyingly close to not surviving the journey. The story has especial significance in current times, but even without the weight of modern world affairs, it's an unforgettable glimpse into a part of the world that most of us will never see.
While this is Lefevre's story, told directly from his perspective and making heavy use of his memories and accompanied by hundreds of the photographs that he took, French cartoonist Emmanuel Guibert is the one that really brings it to life in comics form, capturing the likenesses of everyone Lefevre encountered and making the landscapes and villages seem like real, lived-in locales. The photos are interspersed throughout the pages, such that they often seem like comics panels among the rest of the illustrations, but Guibert fills everything out, making the characters seem to move and live in the way that static photography can't. But he does this without being showy, sticking to muted colors and subtle figure work. It's only when you look closer that you realize the great work he does, capturing realistic gestures, movements, and facial expressions, and putting just the right amount of detail into the folds of clothing and the objects in the backgrounds, such that the artwork doesn't stand out from the photos, but also emphasizes the way they can more fully capture reality. It's all perfectly paced and put together for the best flow, propelling the eye across the page without calling attention to itself.
The photos themselves are pretty great as well, filling pages with images of beautiful landscapes and fascinating people; it's easy to see why the organization wanted Lefevre along to document what they did and the experiences of the people they were helping. Nearly every page has examples of this imagery, but while most of the book contains diary-style narrative captions, they occasionally drop away and let the photos tell the story by themselves, working as comics on their own without Guibert's assistance: 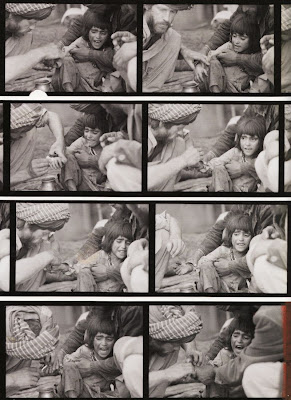 Other times, Guibert takes over, especially in the character-focused scenes, which sometimes drop the backgrounds altogether to focus on the people and their conversations: 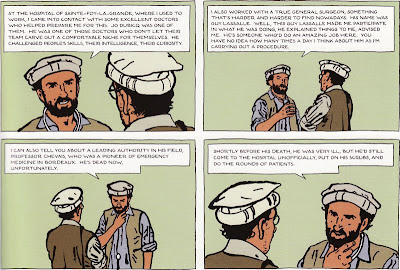 He doesn't always do this though; one key scene in particular sees Lefevre talking to the team leader as the two of them walk along a mountain path, and not only does Guibert show them moving across a detailed, non-repeating landscape, he moves in and out, making sure to bring them to the forefront at a key moment. But the fascinating thing is, while the sequence plays out over several pages, the panels fit together when placed end to end to create one long background, showing the level of dedication that he brought to the scene (click to enlarge):

Other times, he uses the simplicity of scenes' visuals to come up with something striking, like a scene in which the team must cross the Pakistan-Afghanistan border in the middle of the night, in pitch blackness: 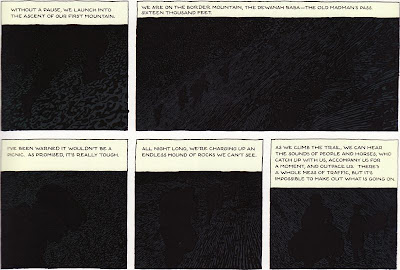 And one other technique that pops up here and there sees Guibert providing more sketchy illustrations in the midst of long narrative captions, breaking up the long stream of text:

As one would expect from a figure like Guibert, it's masterful work. But what of the story itself? As moving and striking as it is, one complaint that could be brought against it is that it focuses too much on Lefevre himself, emphasizing his experiences and perspective over everything else. That's not entirely fair, since this is a diaristic account of his every moment during the trip, and the sheer volume of detail about everything he sees is fascinating, but the most interesting portions of the story involve the people living in the war zone and the particulars of the medicine practiced in such difficult conditions. Of the three sections of the book (which were originally published between 2003 and 2006 in separate albums), only the middle one focuses on this aspect of the journey, with the first covering the journey there and the third the trip home. As interesting as the trips over mountain passes are, the real meat of the book is in that selfless work that the medical personnel did, with an especially striking section seeing the aftermath of a bombing and putting a heartbreakingly sad human face on the collateral damage that is so easily ignored on the evening news.
The third book especially suffers after the moving portions of the middle of the story, as does the reader's probable estimation of Lefevre's character. After learning about a week-long detour on the planned trip back to Pakistan, he foolishly decided to make the journey on his own (with a guide), even though he didn't speak the language and wouldn't have the experience of the other members of the team or the safety of numbers. It's enough to call into question the emotional damage or post-traumatic stress the experience must have caused him, and the rash decision nearly costs him his life. But while he has a thrilling adventure, it can only diminish him in the eyes of the reader; after seeing the horror that some people have to live through, one would have thought he would put more value on human life and not throw his own away so casually. He certainly doesn't act very well on his journey either, coming across as irritated with the people tasked to assist him when they don't live up to his expectations, acting like the caricature of the foreigner who believes himself to be more important than those poorer than him. Guibert does get at least one great sequence out of it though, in a scene that sees Lefevre lost in a snowstorm, descending into an angry fugue and taking out his emotions on his poor horse: 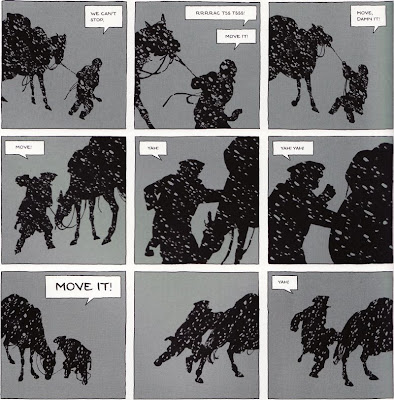 The story being related so many years later, Lefevre must have had some conception of the way his actions would be viewed, and this being a matter-of-fact chronicle of his experience, he and Guibert seem to leave it up to the reader to decide what to think. Is it intended to be a depiction of the depths to which man can sink when he feels he's lost everything? Are we supposed to be excited for Lefevre as he sets out on his own, as if he's doing something brave and self-actualizing? Whatever the case, it might be interesting, but it suffers when juxtaposed with the real horrors of innocent people trying to survive in an awful environment, and it's an unfortunate ending to a remarkable story.
But really, while Lefevre's trials and tribulations take over in the final third, the book as a whole does an incredible job of bringing the time and place to life, plopping the reader down in an unimaginably foreign land and describing what we're looking at, nearly overwhelming the mind with the details of the people's lives. It's wonderful to have a human face on the stories that come to us from the other side of the world, something that can tether abstract ideas of government, economics, and war to reality. Guibert and Lefevre have put together something amazing here, a great bit of comics journalism and autobiography, and it should definitely not be missed.
Posted by Unknown at 10:25 PM