Low Moon: Hey, a Gary Cooper pun, why not?

Elsewhere: I've got a review of the latest Fringe up at The Factual Opinion, but I apparently missed the deadline getting my Dollhouse review in, so that one won't be up for another day or two, I think.  Also, I contributed an entry to a list of the best graphic novels of 2009 to a site called Flashlight Worthy Book Reviews.  It's a pretty good list, also including entries from blog luminaries like Jog, Sandy Bilus, Brigid Alverson, Johanna Draper Carlson, and David Welsh, so check it out.

Links, all about Dash Shaw for some reason: Shaw has apparently gotten into the world of animation after his series of shorts on IFC.com, so he's tackling a bigger project, a feature-length animated film called Slobs and Nags, which is being produced by Hedwig and the Angry Inch's John Cameron Mitchell and features the same team of animators and musicians, plus the addition of Frank Santoro.  Wow, that's cool.  Here's Shaw's announcement, with a link to more information.

And since Shaw is super-prolific at the moment, here's a neat short comic that he did for Vice, called "The Haunted High School."  I liked it quite a bit.

What's better than a new story by Jason?  Why, several in one volume, of course!  This book collects the titular serial story that ran in The New York Times Magazine, along with four other stories of a similar length, making for a good deal of great material, equal to two or three of the album-sized volume in which his comics are usually delivered.  And all the better, I say; the more of Jason's weird energy and quirky, poignant storytelling that I can consume at one time, the better.

Jason's style of storytelling probably needs no introduction, so suffice to say that I'm always beguiled by the weirdly relatable inexpressiveness of his anthropomorphic animal characters, and the way that he puts them in such fantastical situations yet still makes their emotions and actions seem real and believable.  It's kind of a mystery how well he's able to do it, crafting easy-to-follow stories in such a minimalist style, but luckily, they're incredibly enjoyable, so one can easily get lost in them, forgetting questions of craft and technique because those aspects become all but invisible.

The five stories included here all traffic in the same sort of alienation and unhappiness that is his forte, with some of them going off into (or starting from) more surreal directions than others.  "Emily Says Hello" sees a hapless assassin picking off a group of men one by one at the behest of the eponymous woman, who rewards him with sexual favors, but never actually emits any warmth toward him or provides an explanation for why she wants them dead.  It's pretty dark, but fascinating in the emotions it evokes and the way the story suggests so much happening beyond its panels.

"&" is a similarly downbeat tale, alternating between two men who are similarly pursuing futile goals: one trying to steal some high-priced artwork in order to finance an operation to save his mother's life, and the other trying to get the woman he loves to agree to his proposal of marriage by killing all the other men she chooses over him.  The latter storyline is pretty darkly comic, with its hero's quest spiraling more and more out of control with each subsequent murder, and the goal becoming increasingly distant as his object of affection keeps choosing others ahead of him.  As a counterpoint, the former story goes in a completely different direction, full of slapstick comedy like something out of a Marx Brothers' movie.  Jason switches storylines on each page, so the two moods get intertwined in a fascinating manner, jumping between light and heavy quickly enough to give readers whiplash.  And then he brings it all together in a perfect Jason ending, fading out on a lasting image that sticks in the memory hauntingly.

The title story is a bit less dark than those already mentioned, but no less rich in quickly-defined but interesting character interactions.  It's a Western, starting with a man returning to a town with an apparent grudge against the sheriff.  But, in typically quirky Jason style, it turns out that the dispute between the two of them involved a chess match that the sheriff won, and now the man has come back for a rematch.  It's rather goofy, the way the characters all treat the match as seriously as if it were a pistol duel, but the real richness of the story comes through the character turns, the way the sheriff has become a washed-up drunk and has a rocky relationship with the local schoolteacher, the bruised honor of his rival, or the quiet resolve the various deputies have in preparing the sheriff for his rematch.  It's fascinating to watch Jason put this all together, creating a sort of melancholy wistfulness and tiredness through the body language and sad inexpressiveness of the characters.  He manages to convey so much so simply, whether in a pained back-and-forth: 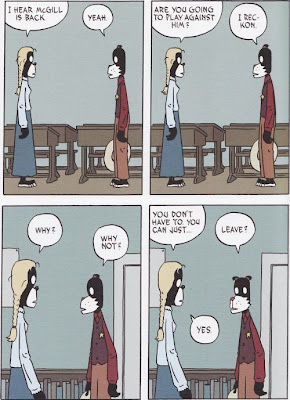 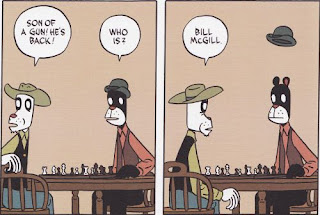 Or the choreography of a humorous barroom brawl: 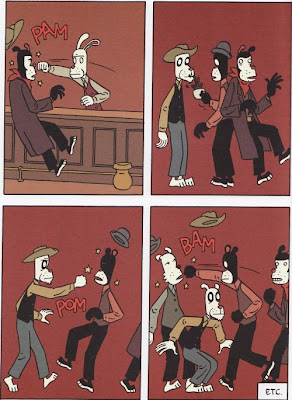 It's a darn good entry in the artist's long line of stories that keep the reader coming back to find new layers of the work.

The final two stories, "Proto Film Noir" and "You Are Here", aren't quite as good as the others, and they suffer a bit for coming at the end after the highs of the first two thirds of the book, but they're still quite interesting and full of the same surreality.  The former sees a caveman wander into a domestic scene and begin an affair with the wife, then kill the husband, but every morning, the victim shows up at the front door, ready to eat breakfast.  No matter how many times or how gruesomely he is murdered, he wanders in with a "Good morning!" and a resolve to do some gardening.  What does it all mean? Who knows, but it gives Jason a chance to come up with more darkly comic violence.

As for "You Are Here", it sees a bickering couple argue via blacked-out word balloons, followed by the wife being abducted by a big, green alien.  The husband then spends the next several decades building a rocket which he can use to find her, while his son grows up, builds a family of his own, and then repeats his father's mistakes (signified by the reappearance of black word balloons), ending up splitting with his wife and joining his father in the search for his mother in the finally-completed rocket.  It's a strange story, seemingly metaphorical for the way a broken marriage might seem inexplicable to a child, but not really holding together as well as most of these.

But even lesser Jason stories are still like nothing else in comics, and considering the quality of the book as a whole, there's little to complain about here.  It's another great example of the strange alchemy that Jason has mastered, drawing readers in to compelling tales of people caught up in oddly familiar situations, even when they're dealing with something that's off-kilter from reality as we know it.  That's the Jason touch, and long may it continue to grace our pages.