Driven By Lemons: As good of a chauffeur as anything in this book

Elsewhere: I've tried my hand at some music writing for The Factual Opinion's "best songs of 2009" countdown, which I encourage people to check out if only to follow the links and listen to some of the songs.  I'm terribly behind the curve when it comes to music, so listening to the nominees has been an eye-opener for me; there's some great stuff there.  I don't really know what I'm doing when writing about it, but it's an interesting exercise.  Enjoy, Brady addicts!

Driven By Lemons
By Joshua Cotter

When it comes to some of the more outre indie "artcomix", one complaint against them is that they can be pretty damn inscrutable, little more than a series of images that don't hold together well or add up to much of anything.  Of course, that could be a reaction to any sort of modern art, but the fact remains that most people come to comics expecting a story, and experiments with abstraction

aside, many of those indie comics are lacking in the area of narrative, or at least taking an approach that can alienate those who aren't accustomed to their strangeness.  Luckily, if you're looking to bridge the gap between narrative and abstraction, Joshua Cotter's follow-up to Skyscrapers of the Midwest

is here to do so.  It is presented as a reproduction of the sketchbook in which it was created, although if it was actually put together page by page in such a manner, that's a pretty impressive feat.  It's kind of inscrutable itself, with the opening pages including some dense, seemingly-glossolalic text, blacked-out panels next to ones full of masses of tiny triangles and squares, and captions that seem to describe a fractured mental state, but as one continues to turn the pages, a sort of story makes itself clear, seeing a truck plunge out of the sky over the Chicago skyline, followed by a bunny in a sort of space suit crawling out of the wreckage and having hallucinations in the form of pages and pages of scribbly lines and exploding shapes and colors.  Later, that same bunny (or perhaps a different one?) is seen lying in a hospital bed, barely moving, and listening to the sounds around him while having more hallucinations, eventually succumbing to an enveloping scene in which what seem to be different bunny-shaped versions of himself run through an oppressive mental landscape, jostling for superiority until the eventually merge together, then get stuck in some sort of structure while a sort of flaming-headed fox lectures them about emotion and reality, before they undergo another transformation, into a small red twig of a tree, that, after being urinated on by the fox, grows into a thick vine or trunk that plunges up into the atmosphere and seems to obliterate the odd mental machinery of the bunny's mind before withering back into a tiny branch.

Hmm, that description doesn't seem to make very much sense, which sort of ruins the initial argument, but one can only textually paraphrase the images so much; the artwork here really has to be seen to be believed.  Cotter pours on the intricate detail, whether in "simple" depictions of clusters of tiny triangles and squares or in the gorgeously textured depictions of the bunny and his "adventures", and especially in the way he seems to devolve into component shapes and scribbles: 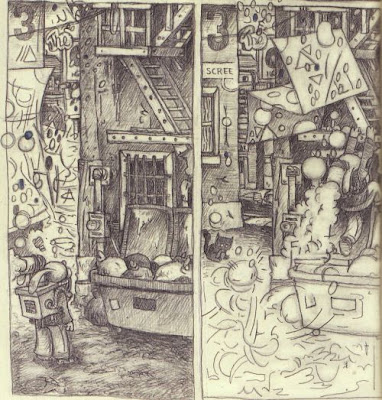 And those "scribbles" aren't just random, childlike clusters of lines; they're intricately detailed as well; they might or might not contain any actual information, but reader's can't help but pore over them to try to perceive some sort of pattern: 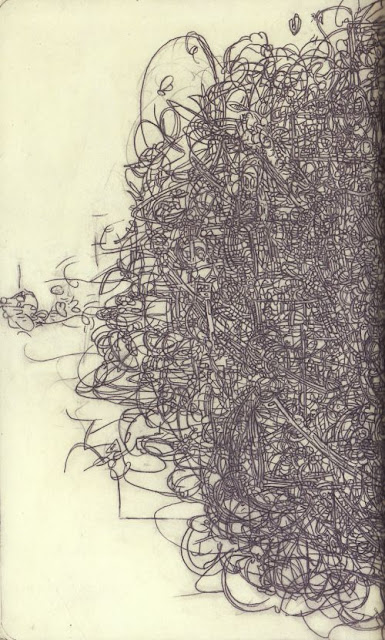 The scenes of the bunny in his hospital bed are similarly arresting, although somewhat simplified, and enhanced through repetition, with slight changes from panel to panel signifying the passing of time and the bunny's blank mental state: 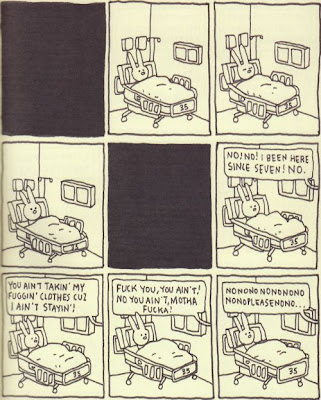 This simplicity and stillness contrasts with the rich detail of the bunny's hallucinations, along with the fluid sense of motion that they provide: 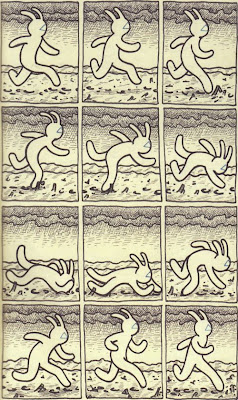 Not to mention the incredible sense of color that stands out so much from the black and white backgrounds; when the vine (if that's what it is) starts growing and coursing through the sky, it looks like a stream of blood: 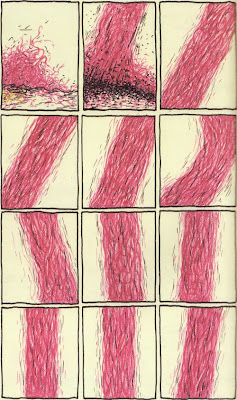 So, yes, it's pretty visually amazing, and seems to have some sort of narrative continuity, but, to ask the ever-present question posed to challenging art by minds that are struggling to keep up, what does it all mean?  The beauty of abstract-style art is that it can contain any interpretation the viewer/reader wants to pour into it; my take on this would be that it is an attempt at a depiction of mental illness, or possibly a damaged brain (from a car accident?) struggling to recover some semblance of normalcy.  The early struggles of the bunny might be an attempt to fight the mental chaos of schizophrenia, bipolar disorder, or another affliction, culminating in a suicide attempt, which leads to the hospital scenes and the trip through the mindscape that the fox (doctor?) tries to bring under control.  This view is bolstered by the final scene, which sees the bunny out of the hospital and at home, but depicted as damaged almost beyond recognition and still not fully "normal": 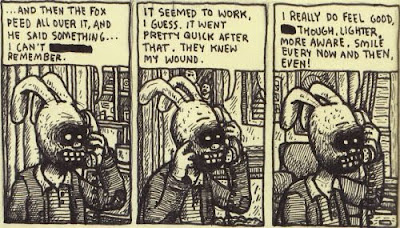 The thing about mental illness is that it can seem glorious and amazing to those experiencing it, even while it is incredibly damaging.  Hence the incredible sense of detailed beauty in the hallucinatory excursions, contrasted with the crushing banality of "normality" in the hospital.  But at the same time, the oppressive chaos, brought to life through the scribbly shapes and what looks like complicated mental machinery, threatens to tear one apart completely, and the rebuilding process is long and hard, with the result being far from optimal.  It's a terrible situation to deal with, and Cotter's depiction of it is at turns horrifying, engaging, enthralling, and confusing, making it, even with its near-total removal from reality, just about the most effective depiction of mental illness possible.

But maybe that's not it at all; another reader might come at the book with a completely different, and equally valid interpretation.  Cotter's work here is so well done that it can handle different takes, and it can be fascinating to see what different people bring to the work and get out of it.  One could even just enjoy the uniquely arresting visuals, which are outstanding and gorgeous on their own, divorced of any attempt at meaning, possibly even just evoking emotion or memory in their visceral engagement with the reader's senses. It's a rich, beautiful work, like nothing else out there, and it shows what an amazing talent Cotter has for comics art.  Let's see how he can top this one.
Posted by Unknown at 7:51 PM