The Boys: This is no fun, but it's like, real, man

Motion comics links:  I'm not usually interested in motion comics, which tend to be cheesy bits of limited animation with poor voice work, falling in between the two mediums and utilizing none of the strengths of either, making for the worst of both worlds.  But this one is interesting: Dean Haspiel's "Sex Planet", which retains the word balloons while adding Haspiel's own voice and adding a little bit of interest in the motion of graphical elements.  Still not as good as the comic, but actually not terrible.

For an example of the other kind of motion comics, you can watch a 40-minute-long adaptation of the first volume of Dan Hipp's Gyakushu on Hulu (!).  I wouldn't normally recommend it, but any exposure for that awesome series is worth pointing out.  Hipp has an interesting blog post about it, where he notes that he didn't really have anything to do with the adaptation, but the real notable news is that Tokyopop has finally made the third and final volume of the series available, if only through print-on-demand.  I know I'll be springing for it. 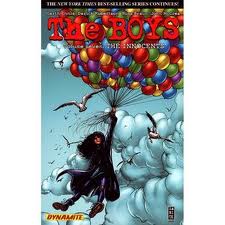 Well, this is certainly an unpleasant read.  It's purposely so, however, an impressive bit of long-term plotting and characterization on Garth Ennis' part, the inevitable conclusion (but hopefully not the final one) of what seemed like silly poor-taste jokes at the outset of the series.  That's right, I'm not talking about the rampant rape, murder, baby-eating, and pedophilia that the super-characters in this series often get up to, but the dissolution of Wee Hughie and Annie January's relationship, which inevitably resulted from choices made and damages done at the very beginning of the series, then percolated under their every interaction up until the climax of this volume, in which they exploded to the surface with devastating results.  It's horrifyingly ugly to watch, like being present for a nasty fight between married friends and trying to look the other way while they air their dirty laundry in public.  That makes it a testament to Ennis' facility with characterization, as he turned what started out as mostly comedic bits of introduction to the world of the comic (that is, the accidental death of Hughie's girlfriend as some superheroic collateral damage, and Starlight's sexual-favor-requiring initiation into the world's premier super-team) and then explored their consequences, throwing the characters together and letting them develop a realistic relationship that stood out through its depth of emotion (as well as being one of the few bits of actual positivity in the series) then demonstrating the pain caused by hurtful secrets, tearing them apart in a scene that is painfully realistic in its depiction of the ugly things that emotionally injured people can do to each other simply through their words.

That's the real power of this series: the realization that the awfulness depicted throughout has consequences.  The horrible events that constantly occur aren't just there for jokes and shock value, but to show how the depravities of society can work their way into everything, polluting the best things about us and ruining everything.  It's a broken world we live in, and while Ennis exaggerates it by clothing it in spandex, horrible things still happen outside our windows, and it affects us all.  Maybe he can manage to bring things back around to some sort of happy ending, but it's looking less and less likely, and thus more and more like the real world.
Posted by Unknown at 6:00 PM