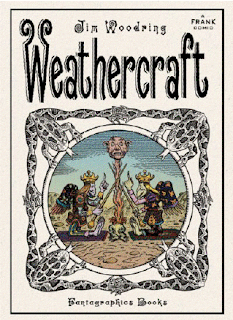 I must say, I’ve never understood Jim Woodring’s “Frank” comics, although I’m also not sure there’s much to understand, since they seem to be operating on a visceral level, presenting constant surreal, dreamlike imagery tinged with unsettling grotesquerie, seemingly wrenched from Woodring’s subconscious and onto the page without much thought as to what they are supposed to represent, if anything. This graphic novel certainly seems to invite interpretation, however, containing a narrative of suffering and discovery, but one does wonder if it is all an elaborate joke by Woodring, an attempt to show off a lot of weirdness and see how people try to explain it. If so, it’s a pretty great gag, and a really well-crafted one, from the flowery-worded jacket which introduces the characters to the slaved-over art that sumptuously details the phantasmagorific world, conveying its story completely through wordless action. 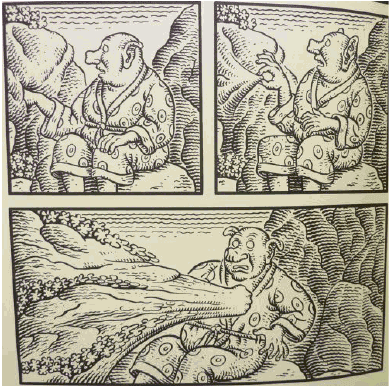 That story is a disturbing one, sure to leave residue in some readers’ nightmares; it sees a human-pig hybrid creature named Manhog get repeatedly tormented, whether through the torture of more powerful beings or just the pain and misery of his horrible life in the muck, until he pulls a nasty creature out of his throat, and upon destroying it, is suddenly gifted with something akin to sentience, an ability to reason and see beauty in the world. This doesn’t necessarily keep him out of trouble, but he does try to direct his own destiny, even discovering that he can manipulate the fabric of reality itself. He doesn’t end up any happier in the end, whether because his reasoning mind ends up making things as bad for him as they were before, or because he was being manipulated by godlike tricksters and never had any real control at all. It all seems to be some sort of comment on humanity, the cruelty of life and capriciousness of nature, with man in all his intelligence being only one slight step up from beasts and never able to truly understand the world. Cheerful stuff! 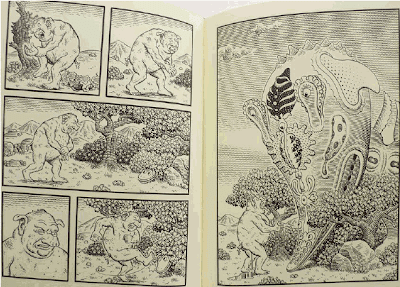 It’s certainly compelling though, especially because of Woodring’s incredible control over his artwork, which gives everything a realistic weight and texture, no matter how strange. His precise line is so consistent that nothing seems out of place here, and even the most bizarre inventions of his psyche seem to fit in with the more recognizable imagery. It seems like a fully realized ecosystem, although one we could never hope to understand, populated with creepy monsters prone to casual cruelty. There is plenty to disturb the reader, however, such as a pair of feminine beings who seem wrong, sporting backward-bending knees, winglike protrusions, and distended faces; their actions stand out as especially evil and manipulative as they gleefully show Manhog a parade of horrors, including scenes from what appears to be the “real” world that are, for him, the most disturbing sight of all. 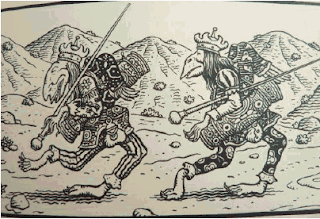 So, does it all mean anything? Who knows? But it’s certainly a fascinating read, full of arresting images that seem like they are triggering some deep impulse in our lizard brains, and that’s a pretty significant achievement in itself. If nothing else, it’s often quite funny, as in a scene in which Manhog is bathing in a pond when a pair of what appear to be giant frogs walk up, open their mouths wide, pull out harps, and play a tune, encouraging him to sing along. If you can accept that as something entertaining and play along with its dreamlike logic, you should be able to enjoy the book at the very least, and maybe you’ll even feel like you get something out of it. I know I did, and even if it was just confusion, it was worth it.
Posted by Unknown at 12:00 PM