The Playwright: Oh, to be an aging, celibate, wallflower

Sorry to anybody who cares, but life has been crazy as of late.  I hope to have more new reviews up soon, but for now, I've got several that I wrote a couple months ago to be published elsewhere that did not end up being used, so I'll be posting them over the next couple weeks.  Enjoy:

The Playwright
By Eddie Campbell and Daren White 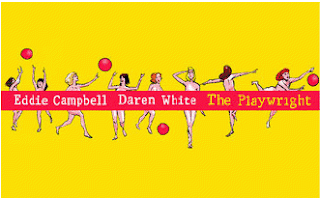 So, you want some literary comics? Well, this is your lucky day, since this new Eddie Campbell graphic novel is like the comics version of a Philip Roth novel, all about a boring middle-aged writer and his sexual hangups. That should get The New Yorker’s attention! But don’t despair, it’s not a stodgy attempt to win a Pulitzer, it’s an Eddie Campbell comic, which means plenty of striking imagery, some very enjoyable wordplay (assisted by Daren White, who also worked with Campbell on Batman: The Order of Beasts), and some interesting use of comics to make a mostly internal story lively and fun.

And yes, this is a very inwardly-focused story, taking place almost entirely inside the eponymous character’s head, with captions hovering over almost every panel detailing his thoughts, desires, worries, and fantasies, although they are related in the third person, providing some remove from the intimate details and making it less of a confessional and more of an examination of a subject. But it’s far from dryly analytical, instead painting a very human portrait of a flawed, lonely man who can’t help but constantly think of sex, when all he really wants is somebody to share his life with. He’s intelligent, and he’s managed to pour all his hang-ups and difficulties with relationships (especially his family) into his art, ending up successful and recognized, but still unhappy. He might be kind of pathetic, addicted to internet pornography, imagining every woman he sees naked (yet judging them for their imperfections, though he isn’t exactly an Adonis), and being too timid to form a bond with anyone outside of a obligatory interaction (his social life consists of hanging out at a local bar so he can imagine himself part of the crowd that comes in to watch soccer). 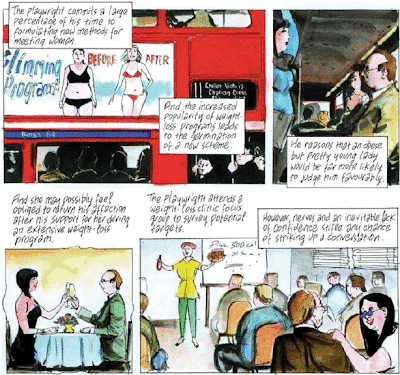 In anyone else’s hands, this would be a depressingly sad story of an achingly unhappy man, but Campbell manages to use just the right tone, making the flights of fancy funny and relatable and exaggerating the sexual obsessions to a degree that they seem kind of ridiculously recognizable rather than horrifying. The art varies from lusciously smooth curves depicting the fantasies, to harsh scratchiness when concentrating on the playwright’s awkwardness, always exhibiting a wonderful grasp of posture and fluid movement. The Campbellian details and flourishes are all here, but they fit within the structure of the narrative, contained within the regular panels marching steadily across the landscape-oriented pages.

While the potential is there for this to be a navel-gazing exercise straining for acceptability from the literary establishment, it’s anything but, full of live and spirit, recognizable in its exploration of human foibles and the difficulty of forming meaningful human relationships. One must exit one’s safety zone in order to make contact with another, and while that’s a big step, it’s a worthwhile one. That such a notion can be communicated so subtly, movingly, and entertainingly is a testament to Eddie Campbell’s skill. He’s a keeper.
Posted by Unknown at 10:21 PM