COWA!: there are no cows in this book

Man, I am way behind on writing about books I've read recently, so I'm actually reading a novel for once, in hopes of catching up. It's Catch-22, one of my favorites, but I have to read it again because my wife doesn't believe it's actually as good as I remember it. She gave it a try a couple years ago, but gave up after twenty pages or so, which seems crazy to me. So she says if I read it again and still think it's good, she'll try again. I think she's destined to lose this challenge, because I'm loving it so far, and I haven't even gotten to any of my favorite parts. I'll keep reading. Take that, illiteracy!

In addition to the review below, I've also got a look at Fantastic Four: True Story #1 up at Comics Bulletin. Dig it. 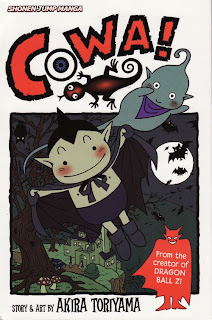 I still haven't read hardly any of Akira Toriyama's more famous works, but after checking out this kids' book, I'll definitely want to read more of his stuff. In this one-volume work, he tells the story of some monster kids who end up going on a quest to save their village when everybody gets the "monster flu", necessitating the need to travel far away and buy some medicine from a witch. Leading the group is Paifu, a half-vampire, half-werekoala who has personality to spare. He's a headstrong kid who barrels into every situation without thinking, dragging his friends along with him. The one who gets included most often (and with the most reservations) is Jose, a ghost kid who always gets wrapped up in Paifu's schemes, but Paifu's rival Arpon, a Japanese-style yokai monster (he probably fits a familiar type, but I don't know what it is) who is always in competition with Paifu, whether the latter cares or not: 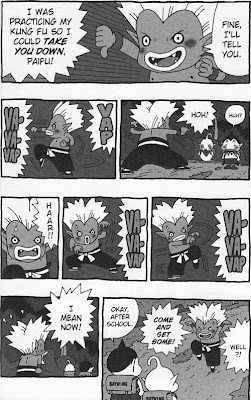 Rounding out the main cast is Mr. Maruyama, a human and former sumo wrestler who moved to Paifu's secluded village after accidentally killing an opponent. He's actually the most interesting character in the book, coming off as irritable and stand-offish, but revealing himself as lonely, friendly, and loyal through his actions, a testament to Toriyama's storytelling skill. In a string of jokes that probably read better in Japanese, the kids mispronounce his name as "Marumaya", badger him to learn his first name (it's Mako, which he is embarrassed about, because it sounds like a girl's name), and then call him "Makoleen", because it's easier to say. He gets mad at them about this at first, but eventually gives up and just accepts it, as adults usually end up doing with kids' annoying behavior.

It's incredibly fun to watch these goofy characters as they go on their journey. The kids often react with astonishment at the crazy human world they've never seen, getting excited about simple pleasures: 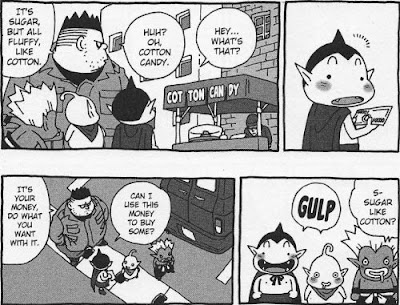 Most of their interactions with humans end up in fights, which is highly enjoyable, since if there's anything Toriyama can draw the hell out of, it's fighting. Paifu is especially fun to watch, since he always leads with his head: 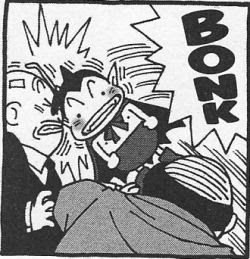 He also has the ability to turn into a giant, ferocious koala, leading to some really funny gags involving the others trying to get him to turn normal again. And Makoleen, being a champion sumo wrestler, is a force to be reckoned with: 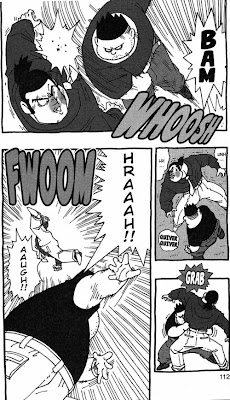 It makes for a rousing story, with some exciting action, hilarious jokes, and just an all-around good time. I love Toriyama's art here, which seems kind of different than his usual style at first (at least, from my limited experience), with simple, rounded characters that have dots for eyes (but pointy ears still reign supreme). When the more human-looking characters debut, they feature the more familiar, triangular-shaped eyes and hairstyles (or bald heads) that mark them as Toriyama cast members, but he still throws in plenty of unique creatures and locales. The settings are beautifully-realized as well, with a colored opening chapter that gives the monster village a dark, spooky feel, full of bizarre creatures and weird-looking houses: 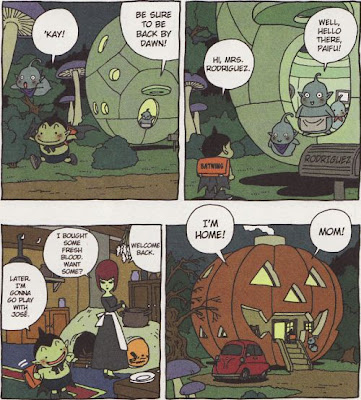 This contrasts nicely with the normal-looking human cities, and also with the creepy forest and tall mountain where the medicine-making witch lives.

It's just tons of fun (sorry if I'm overusing that word) throughout, and there are tons of other details that I could point out, such as the Donkey Kong-like sound effect that results when Paifu runs: 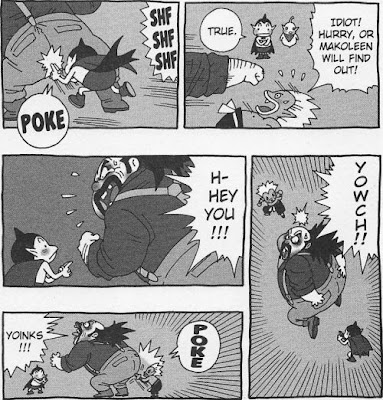 It's an excellent book, fun for all ages and a hell of a good read. I've really got to read more of Toriyama's manga. He's definitely one of the best there is at what he does.

This review was based on a complimentary copy provided by the publisher.
Posted by Unknown at 9:17 PM