Taking a break from the nigh-pointless proliferation of news about comics which might be seen sometime in the wispy mists of the future, here's a good, solid book that you can find right now: 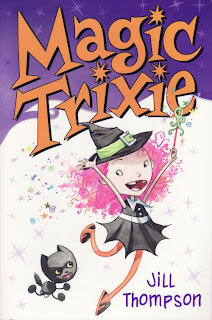 It's no secret that Jill Thompson is quite a good artist, since she's been slaving away, producing excellent work for quite some time now, but the beautifully-watercolored comics she's been making in the last few years have been simply wonderful, especially her story in Fables: 1001 Nights of Snowfall and the collaborations she worked on with Evan Dorkin for the Dark Horse Book of... series. And she may have done her best work yet in the new children's comic Magic Trixie, a cute story about a little witch girl, who, like several other Thompson-illustrated characters (see examples here) just happens to resemble Thompson herself: 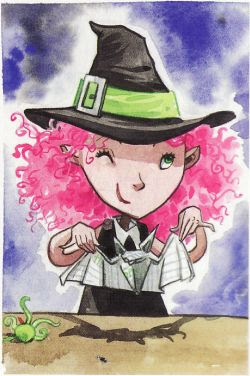 Magic Trixie (who is always referred to by her two-word name, for maximum punnery) is a cute (expect to see that word used a lot here) little girl who happens to have magic abilities, along with all the other members of her family. She goes to school along with several other monstrous children, including Stitch, a Frankensteinian monster, Loupie Garou, a werewolf girl, Nefi, a mummy princess, and The Twins, a pair of young vampires. In this volume, she worries about what to bring for show-and-tell and has trouble coming to terms with the attention everybody pays to her baby sister, Abby Cadabra.

While Thompson's exquisite artwork might hide the fact at first, the book is really aimed at young kids, probably around the age of five or six. There aren't any Harry Potter-style grand adventures here; it's more of a children's storybook plot about learning how cool it is to be an older sibling. You see, poor Magic Trixie is always being told she's too young to do grown-up stuff like fly brooms without training wheels or cook up potions in the cauldron, but Abby Cadabra somehow ends up getting to use all those grown-up things even though she is just a baby: 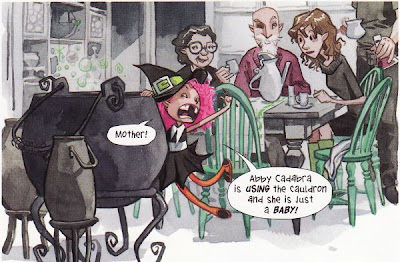 This sentiment gets repeated several times, as does the eventual lesson Magic Trixie learns, and it's a good one for kids who feel neglected or less important when everybody is focused on the new addition to the family.

But the nice thing is, the main plot doesn't kick in until about halfway through the book; that initial portion is dedicated to setting up the world, and Thompson does a beautiful job at it. Magic Trixie gets introduced early as a super-expressive ball of energy, seemingly always in motion, and usually making plenty of noise and causing lots of commotion: 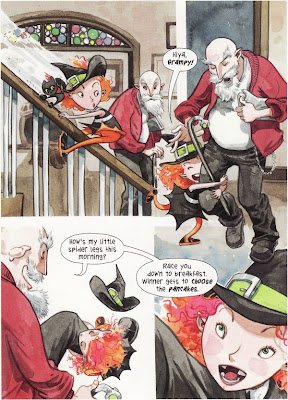 She's also accompanied by her cute little talking black cat, Scratches, in a touch reminiscent of Kiki's Delivery Service. Scratches makes a nice foil for Magic Trixie, accompanying her on her various exploits, offering encouragement when she needs it, and just playing around and having fun with her: 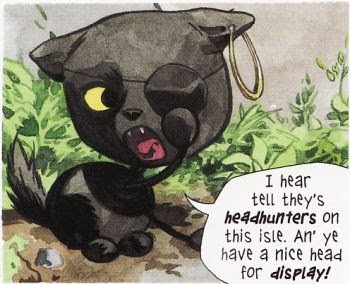 Come on, who can resist a cute kitty dressed up as a pirate?

Magic Trixie's world is wonderfully fleshed out and detailed as well, with tons of little jokes and flourishes filling the corners of the panels (I love that the kids attend a Monsterssori School). And the watercolors that give everything such depth and texture are just beautiful:

It's a great little book that kids will probably want to devour again and again. And Thompson isn't quitting yet; she already has a follow-up volume, Magic Trixie Sleeps Over, scheduled to appear this fall. For fans of all-ages books, this is the current one to get, and as for me, I can't wait to be able to read it to my own daughter in a few years' time.
Posted by Unknown at 9:51 PM