Shojo Beat: In a shocking display of girliness, figure skating wins over ninjas

Here's the one I meant to do yesterday: 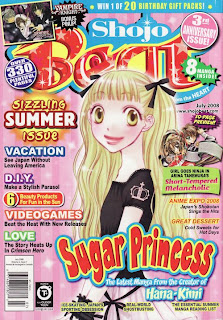 I'm late getting to this issue, since I didn't renew my subscription in time and thus had to buy it off the stand. Whoops! So I'm sorry if this turns out shorter than usual. The articles in this issue aren't really anything to write home about, being about summer and Japan-related tourism, but nothing too interesting. There's a blurb about video games, and it mentions Echocrome, which is cool, since that's a really neat, offbeat little game. Anyway, on to the manga:

This is yet another Arina Tanemura manga (Viz has got to be running out of stuff to publish from her, don't they?) but we only get a ten-page preview here. The upcoming volume of the same name is actually a collection of short stories, this being one of them. It's about a ninja girl who will have to choose between her awesome martial-arts activities and a lifestyle of normalcy when she falls in love with a boy. At least, that's what I think it's about, since the excerpt here is too short to really tell. I've got the full volume sitting on my review pile, so I'll be able to give a full report once I've read it, but I will say that I think I've finally gotten used to Tanemura's cute, gigantic-eyed style, if only through Shojo Beat-related overexposure. We'll have to see how well I can endure it through a whole volume.

In the other preview chapter this month, the creator of Hana-Kimi spins what looks to be an enjoyable story about figure skating. Maya is a spunky girl who gets scouted by a skating instructor after she attempts a double axel at the local rink after being egged on by her little brother: 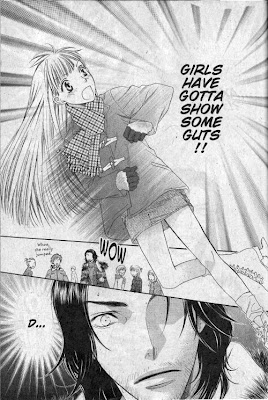 There's precious little here besides introduction to the characters, but Nakajo sets things up skillfully, peppering the chapter with elements that should provide plenty of opportunity for story in the future, including Maya's relationship with her friends and family (two older sisters and a younger brother), and the requisite love interest, a boy skater who the coach wants to pair her with, while he wants to skate solo. And Maya is a fun character too, showing a bit of naivete and a lot of desire to prove herself, especially when somebody makes fun of her for being short. It looks to be a nice formula, with all the elements in place for exciting sports-related drama and personal relationships. And nice art too! I could definitely see myself checking out the collected volumes.

I don't know if there's much to talk about in this chapter of the series I perpetually seem to find on the edge of whether I like or not (did that sentence make sense?). Hino chooses status quo over plot development in the Yuki/Zero relationship, since he backs off from kissing her and passes it off as waking up from a nightmare. Lame. There's a plot about Yuki being stuck at some sort of vampire society party (apparently, lots of actors, musicians, and celebrities are vampires. Good to know), and the plot about the vampire who bit the human girl gets resolved off-panel. A pretty "meh" chapter, overall. Maybe there will be some action and/or dramatic confrontations next month. For now, I'm kind of bored.

So Nobara is finally back home, and everybody is glad to see her. And she and Yushin have decided they're all lovey-dovey, but they're waiting to officially start dating until they make it to the Spring Tournament (the national high school championships). So that seems to remove all the drama, but it looks like her absence has fostered a new spirit of competitiveness, so at least we'll get some drama next time. And maybe some athletics, which is always fun. But for now, it's all happy reunions, and this amusing bit: 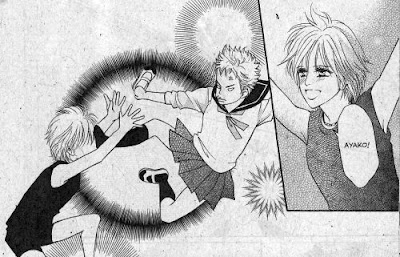 Last month, I wondered why this series was ending so soon, since it had seemed to set up a good formula for a continuing story, but in this penultimate chapter, Rie Takada does the opposite, setting everything up for a finale. Our heroin Rara, a demon girl who has fallen in love with a human, is straying further and further from her purpose of causing evil in the human world, even managing to accidentally do good. And each time she uses her demon powers to help humans, she loses them, leading to this poignant panel: 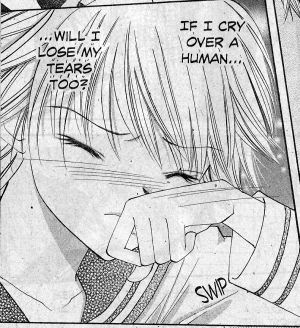 Aw, how sad. Well, it turns out she's in trouble, since her penchant for helping humans is causing her to fade away, and if she doesn't kill Retsu, the human she loves, she will cease to exist. Conundrum! I'm sure Takada will find an interesting way to end things, but it seems pretty intractable at this point. Whatever the case, I think I'll have to try to check out other manga by Takada, since she definitely has some skill at creating fun characters and interesting stories.

We've got another sort of low-key chapter of one of the series this month, with the main plot point being Morita's abrupt departure to the United States on a "job" (what he does to make money has yet to be explained, if ever), just as he had started to develop a semi-romantic relationship with Hagu (maybe). Takemoto runs to the airport to try to talk to him before he leaves, be he doesn't make it, leading to this emotional scene: Poor guy. Unrequited love sucks. The rest of the two chapters this issue deal with Morita's absence (along with the discovery that his bedroom is a replica of the Galaxy Express 999 engine room) and how the others react (especially Hagu herself). Morita's brother (who was the one who sent him away to work) asks Takemoto, "Do you want him to come back? Or do you not want him to come back?" and Takemoto is kind of stuck for an answer. As a rival, he would probably rather have Hagu to himself, but as a friend to Hagu and Morita, he wants them to be happy, and if that means his own unhappiness, so be it. It's a nice character moment, and it's followed by another really good one, as he asks Hagu the same question, and she answers that he should finish doing all the things he wants to do. While she is intimated and often humiliated by Morita, the thing that really connects them is their love for art, and she wants him to be able to pursue his creative side as he wants, rather than hold him back. God, I love the relationships in this manga.

So it's (a little bit) less of a humorous story this month (Professor Hanamoto has a hilariously weird scene in which he realized what occurred between Hagu and Morita), but still a really good one. I often say that this is a great series, and I stand by that assertion. I guess I'm just good at ignoring creepiness. So, please, read this series, everybody. It's really, really good.

Strangely, I don't know if there are any standout moments to highlight in this chapter; it's just a nice bit of the series' usual excellence. In a continuation of previous storylines, Shika and Daigo bond back in the country, and Ann and Fuji spend a day together in Tokyo. Ann is worried that Fuji is depressed and might turn out like her suicidal mom, so she wants to help him out however she can, even though it's kind of awkward because he likes her and she is committed to Daigo. It's a nice series of scenes between the two of them, and a nice solidification of their friendship, as Fuji is finally able to be honest with Ann: 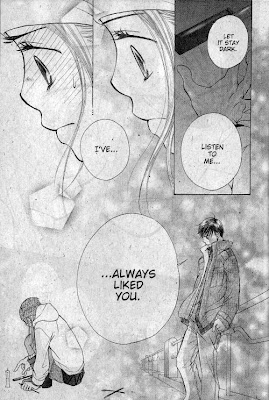 Meanwhile, Daigo and Shika hang out, and the big, dramatic event of the chapter is when the older boy who is "stalking" Shika attacks her boyfriend (a near-faceless character who wonders why she even bothers with him, prompting her to admit that she just needs somebody to hold her together after all the recent upheaval in her life) and drags her off for unsavory purposes (Japanese comics don't hold anything back, do they?). She gets rescued by Daigo, and confesses her love for him in a sort of mid-chapter cliffhanger. We'll see what happens, but I'm curious as to whether Ashihara will upend expectations and have Ann end up with Fuji instead of Daigo. She was about to marry a businessman of some sort in the first chapter's framing sequence...

You see what this shojo stuff does to me? Ah well, it's probably good to embrace my feminine side; that way I'll be able to relate to my daughter really well in about twelve years. On an unrelated note, what's up with the bit of teaser text at the end of this chapter? It reads, "Will the mysterious gloved hand rising up out of the snow to grab Ann's ankle drag her down into the frozen depths?!" What does that even mean?
-----

And that's it for this month. Tomorrow (hopefully), I'll have something from the shonen side of the spectrum. And I've already got the next issue of SB, so I expect I'll get to that soon. And there's always other stuff to talk about, so stay tuned!
Posted by Unknown at 9:37 PM