Town Boy: I'm glad I don't need the definition of "town" explained to me

Hey, this is a good one. Sorry, spoiled the review. 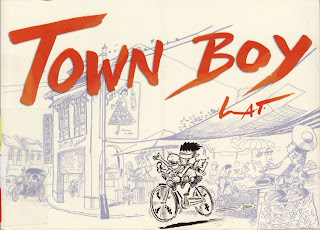 Malaysian cartoonist Lat's book Kampung Boy was a wonderful look at growing up in a small Southeast Asian village, providing a window into a part of the world that most Americans never even consider (and maybe one that doesn't even exist anymore). He has followed it up with Town Boy, a sort of sequel that continues the (semi-?)autobiographical story of Mat, who has grown into a teenager and moved with his family into Ipoh, a new "Cheap Housing Scheme" south of the city of Sungai Roman. The story continues, giving plenty of slice-of-life details about Mat's life as he attends school, makes friends, becomes interested in music and art, and develops a crush on a pretty girl.

As with the first book, the storytelling is perfectly charming. There are more panels and word balloons here, but there's still plenty of the ol' illustrated text, so the debates about whether this is comics can continue to rage. But I don't really care about that; I just love reading this stuff. The landscape-format book gives Lat a chance to deliver plenty of sweeping, double-page vistas of busy houses, classrooms and streets:

I love the sheer amount of detail that gets packed into these pages; every square inch has something going on. And man, does he add tons and tons of personality to even the most incidental of characters! His style is so unique, with skinny, rubbery-limbed people who sport huge overbites, funny-shaped heads, and wide mouths full of teeth. They all look so goofy, especially when they're running or dancing, and their legs are depicted as crossed: 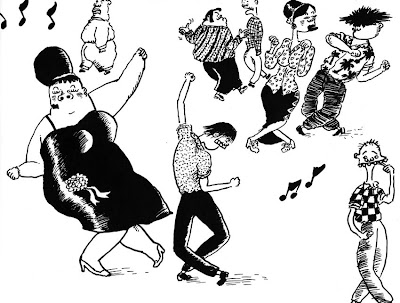 But it totally works; you really believe that these are real people going about their lives. And Lat's art is so energetic, whether depicting kids coming home from school:

Or Mat and his pal Frankie experiencing the joy of rock and roll:

And he totally nails the depiction of teenagers, whether it's in their slouched walk: 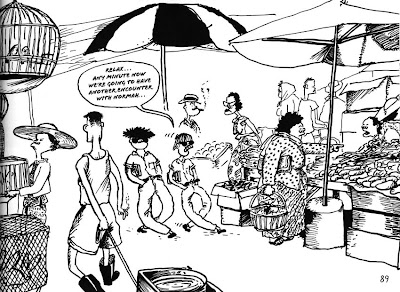 Or the way boys are so nervous when they try to talk to girls: 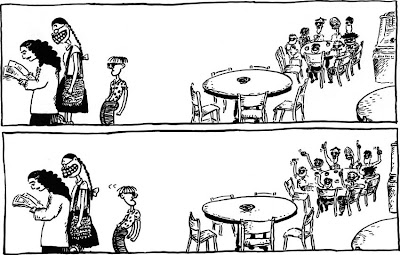 And it's funny! And not just in goofy drawings; the stories themselves are frequently very amusing, especially a scene in which an art teacher tells his students that anything can be art, even a drawing of a naked woman, so all the students draw pictures of sexy girls.

So it's a great book, full of comedy and sweetness and fascinating cultural tidbits. I hope more of Lat's work gets published in the United States, because I've never seen anything else like it. Thank goodness a publisher was so willing to import it; we need more of this kind of thing. Comics are produced all over the world, and we should be able to experience much more than the narrow slice that we are usually exposed to.
Posted by Unknown at 8:30 PM