Dororo: Never fall in love with a demon

Still getting caught up, it seems. I've also got a review of Water Baby up at Comics Bulletin. Not a bad bit of writing, if I do say so myself. Sometimes I'm not completely satisfied with a review when I finish it, and other times I feel like everything worked out pretty well. This is one of the latter. 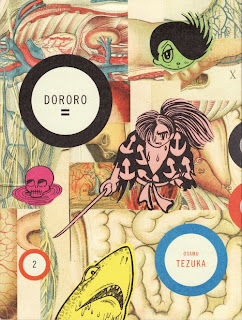 The reason this series was never finished becomes slightly more obvious in this second volume, as Osamu Tezuka seems to be casting about for a direction for the series, unsure of where he wants to go with the concept. A samurai warrior traveling the land and recovering his lost body parts from demons must not have been enough, because this volume sees him confront the family that rejected him, a plot that could have waited several more volumes for resolution (or maybe that's just the more modern style of manga storytelling; things have changed a lot since the late sixties). Then, his boy sidekick is revealed to have a map to a great treasure etched on his back, providing another running series hook, as Hyakkimaru tries to convince Dororo to seek out the treasure and use it to help the common people. It's an odd, kind of unfocused continuing plot, but that seems to be Tezuka's style anyway, letting stories flow whichever direction his muse took him. And it's not like it's any less entertaining; the series continues to dazzle with big, bloody action, weird demonic fiends, and nutty plot twists.

At the beginning of the volume, Hyakkimaru and Dororo come across a strange wall sitting in the middle of a barren landscape. They stop there to sleep, but are attacked by a bunch of fox spirits, and Hyakkimaru ends up fighting them throughout the night: 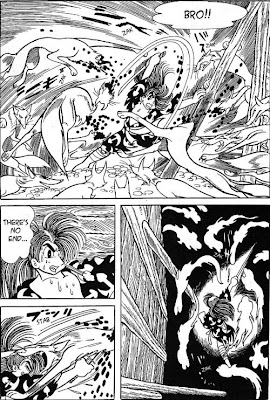 It turns out to be an evil place, as they find when soldiers show up the next morning and line a bunch of peasants up against the wall, then execute them with arrows. It's a pretty harsh scene, with Tezuka unflinchingly depicting men, women, and even children being ruthlessly killed. Dororo eventually loses it and attacks the soldiers, and Hyakkimaru saves him before he can be killed, confronting their leader, a strangely familiar nobleman who calls his men off once he figures out who the weird, prosthetic-limbed swordsman is (his long-lost son, of course!). Our heroes then set out toward the local town, where the plot splits into two halves, as Hyakkimaru meets up with his father's family, including the younger brother he never knew he had, and has a dramatic reunion with his mother, which leads to a sad scene of denial: 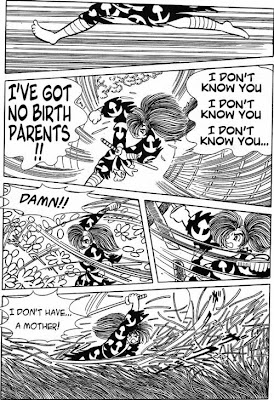 Meanwhile, Dororo gets captured by the townspeople and beaten mercilessly: 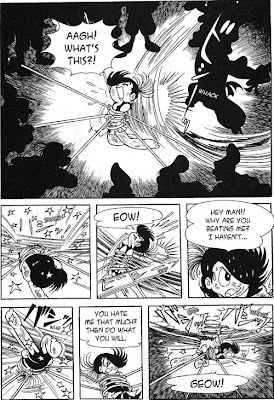 That seems to happen to him a lot. We learn that the town sits on the border between two warring kingdoms, so it was split, with people on each side arbitrarily assigned to a kingdom and sent to battle their neighbors. Dororo befriends a street urchin who was stranded on the side of the wall opposite his home, left unable to return home and reunite with his family. It's a nice commentary on the ridiculousness of war, which can gather up people who care nothing about borders and politics and give them a pointless reason to murder the people they used to be friends with. Eventually, the culprits behind the whole dispute are revealed to be a group of fox demons who have been filling people with rage toward outsiders, resulting in lots of dead bodies for them to feed on. That's as good a symbol of propaganda-wielding governments as I can think of.

Eventually, the two plot threads come together, and Hyakkimaru has one of those emotional battles that work so well in samurai stories: 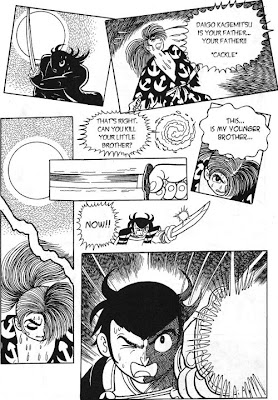 Then, he defeats the evil fox spirit, leading to an awesome display of victory: 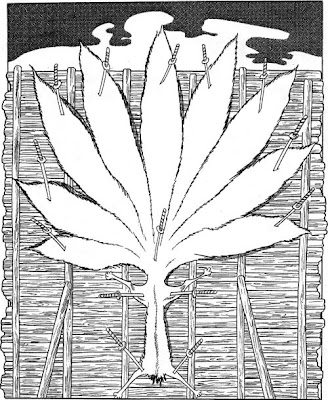 His father is left alive though, so there's still room for a big confrontation, which, given the truncated nature of the series, might or might not happen in the next volume.

The next story is more about Dororo (although there is some nice suicidal angst on Hyakkimaru's part); after being banished from Hyakkimaru's presence, he goes off on his own and befriends a strange woman who acts motherly toward him. She's obviously got some sort of deadly secret though, but he is so lonely and misses his mom so much, he sticks with her. It's a nice bit of characterization; Dororo talks tough, but he's still a vulnerable kid underneath all the bluster. The woman's secret involves a face-stealing demon who takes the form of a Buddha statue and controls a waterfall, commanding her to lure monks to sit under the stream of water, where he kills them and takes their features as his own. While Dororo comes close to being killed by the demon, Hyakkimaru ends up getting over his self-loathing and returns to save the day, in a predictably awesome manner.

The final story in the volume begins in a crazy manner, as the pair of adventurers get saddled with a monstrous child that won't stop following them around: 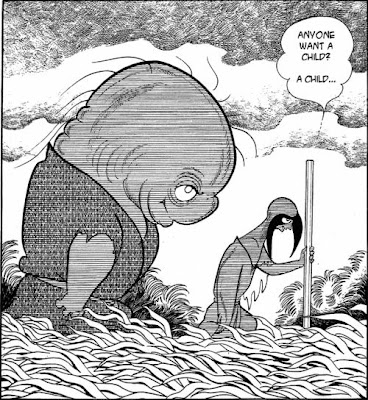 They end up getting mixed up in the affairs of a town which used to have an orphanage run by a kindly nun, until it burned down. There's also a weird-looking nobleman who has a strange wife and servants. I wonder if they'll turn out to be demons? There are plenty of crazy twists and turns, but it ends up with Hyakkimaru managing to lead the townspeople against the monsters, which turn out to be led by a freaky moth-creature: 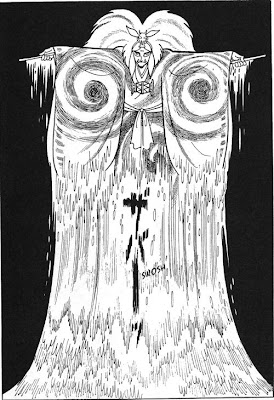 And with a nice X-Men-style scene in which the villagers distrust our heroes and chase them away, we finish the volume. It's another excellent piece of Tezuka awesomeness, with some dynamic action, nasty monsters, and good characterization. It probably doesn't hold together as well as some of Tezuka's other works, but it's still a really fun read, with some amazing content. I love the barely-lit silhouette-style of art he uses at times, and it works especially well in the middle of an action scene here: 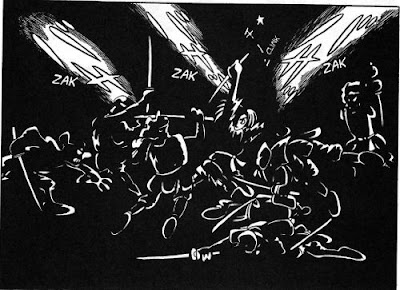 And the monster art is wonderfully weird. Here's a really cool effect that he throws in: 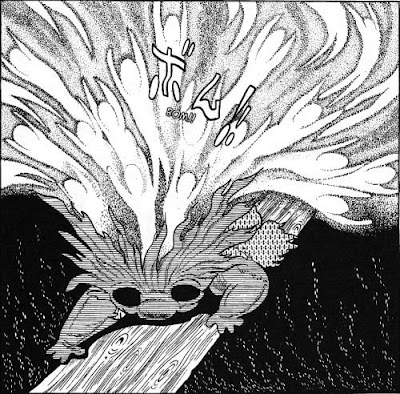 And the wacky, fourth-wall-breaking humor continues to feature, with characters mentioning anachronistic details, or Dororo asking Tezuka not to reveal a non-manly moment to readers. And then there's his "secret move", which is simply screaming really loud: 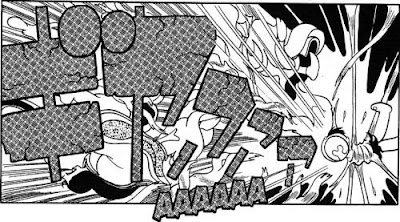 That stuff cracks me up.

On a side note, the notes that are provided in the margins are wonderful, explaining cultural references, language-based jokes, and anything else that isn't immediately clear in the translation. This should be a standard manga feature, in my opinion.

So like I said, it's a great read, especially for Tezuka junkies like me. It might not be his best work, but I'll take anything by him that I can find.
Posted by Unknown at 10:29 PM