The New York Four: Girls are so emotional

Before the review, a few links:

I know everyone has been linking this webcomic by Rebecca Sugar, but it's really good, so I'm joining the crowd.

In other neat webcomic linkage, Marcus Parcus has this cool riff on Winsor McCay's Little Nemo.

And I've got a contribution to Comics Bulletin's "slugfest" review of Northlanders #8. Go emo Vikings! 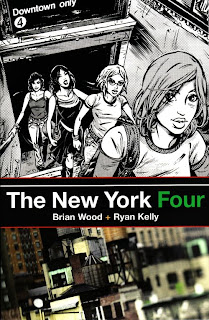 The cover of Brian Wood and Ryan Kelly's entry into DC's Minx line (which, I probably don't need to remind anybody, consists of comics aimed at teenage girls) depicts its titular characters emerging confidently from a New York City subway station, as if they're luxuriating in the freedom that comes with young adulthood, ready to conquer the mythical "big city". The story inside doesn't quite match up to that image, although the possibility does exist that its characters will eventually reach that promised state. Instead, we get a more realistic (yet still somewhat soap-operatically dramatic) portrait of college freshmen (freshwomen?), ready to begin their adult life but still hampered by insecurities and unsure of what kind of person they want to be.

While there are four characters in the eponymous group, this book focuses mainly on one of them (as with a few other Minx books, sequels, while not yet announced, seem inevitable; this one even ends with a caption reading "see you next semester"), the withdrawn Riley Wilder, a student at NYU who has the bad habit of limiting her social interactions to the virtual world, rather than making friends in "meatspace". While she has been an obedient daughter, she uses the opportunity of entering college to reconnect with Angie, her black sheep of an older sister. Seeing how together and confident her sister is inspires Riley to make some real-life friends, and she soon connects with three classmates, planning to move into an apartment with them and helping them all get jobs.

Those jobs, which consist of taking practice tests for SAT prep courses, give Wood a chance to deliver exposition, since they require the girls to attend regular videotaped therapy sessions. This allows Wood and Kelly to have them appear to talk directly to the reader, introducing themselves and giving updates as to what is going on with them: 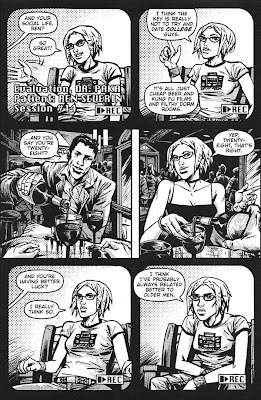 It's a bit obvious for the experienced reader, but it's also effective; we learn that tomboy skater-girl Ren Severin has trouble interacting with members of the opposite sex, man-eater Merissa Vasquez has a tendency to date several men at at time and use her feminine wiles to achieve her goals in a fairly unethical manner, and spoiled rich girl Lona Lo struggles with getting the same high grades she was able to achieve in high school, leading her to begin stalking one of her professors.

But this is mostly Riley's volume, so we spend most of our time with her. Wood develops an interesting conflict, giving her a "love interest" that serves to hold her back from developing as a character; just as she's starting to come out of her shell, she finds an email address that has been slipped into her pocket while at a nightclub, and she starts spending all her time texting this guy on her cell phone instead of maintaining real-life relationships, sometimes even missing classes and work. Wood is good at writing characters that aren't always sympathetic (sometimes even going so far as to make them downright unlikable and alienating readers who have trouble separating character from creator), and Riley definitely stretches one's patience at times. It's almost painful to watch her act so stupidly, but Wood makes her endearing enough that we really feel for her when everything comes crashing down around her.

In fact, I wanted to discuss said climactic events, which will necessitate SPOILING the big twist, so skip ahead if you haven't read the book (or don't, I don't really care). So, when the big twist shows up, in which Riley's online boyfriend turns out to be Frank, her sister's real-life boyfriend, my first instinct was to groan about the soap-operatic nature of the reveal. But once I thought about it, I thought it made sense. It's much more likely that Riley would become involved with someone she knows, rather than a random stranger (and I have to give Wood and Kelly credit for a nice bit of misdirection in which Riley bumps into a young guy right before discovering the email address in her pocket). It also serves the purpose of humanizing Angie, who before that point had seemed awesomely together, as if she had figured out everything Riley was struggling with. But if she could fall in love with a lame guy who preferred to have online relationships with younger girls, she's definitely not the perfect role model she seemed to be. And I liked that Wood didn't go the obvious route of having Angie walk in on Riley and Frank, misconstruing what was going on and blaming Riley for Frank's actions. Of course, a similar scene does occur eventually, but it comes at a more apt time, after Riley becomes overwhelmed by emotion and confusion at her circumstances. Overall, the big climax is kind of overly angsty, but it's not the silly bit of random circumstance that I originally took it for. [END SPOILERS]

Ryan Kelly is developing into an excellent collaborator with Wood (they also worked together on the excellent series Local, and Kelly will be illustrating an upcoming issue of Wood's Vertigo series Northlanders), taking his scripts and turning them into fully-realized stories with expressive characters and beautifully detailed backgrounds. He imbues each of the four main characters with distinct personalities through a combination of wardrobe, posture, and facial expressions: 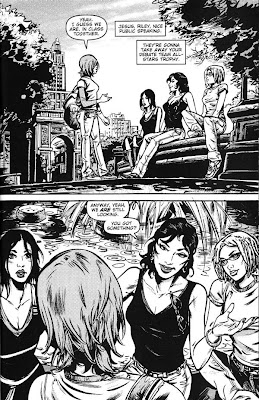 And he has a great sense of motion and energy. In one of my favorite images in the book, we see Riley texting away while walking down a busy street, completely missing all the bustling real-life activity going on around her: 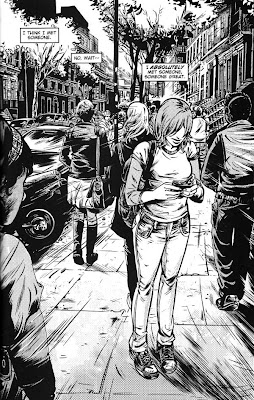 And he can really bring the emotion, whether depicting rapturous joy (and the sheer adrenaline rush of experiencing an awesome band in a small nightclub; also, dig the way Kelly fills the scene with a ton of detail, yet uses shading to subtly direct attention to the important elements of the scene): 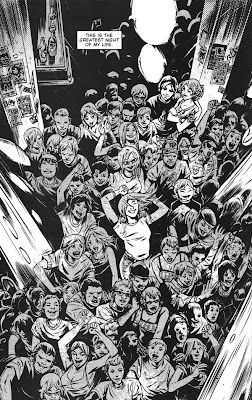 Or that particular blend of anger and hurt that can come from parents just not understanding: 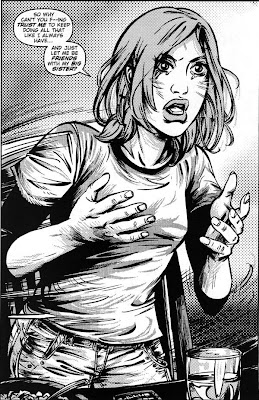 There are plenty of other nice touches, like the Scott Pilgrim-influenced captions announcing characters' status or arrows pointing out certain details. And I love Wood's travelogue-style "NY 101" captions that introduce new locations in the city by pointing out cool bits of insider information for non-New Yorkers. It's a pretty good story all around, and while it doesn't really come to a fully satisfying ending in this volume, more books in the series should be able to continue the story and allow Wood and Kelly to flesh out the other three members of the eponymous group. I for one can't wait to read more.
Posted by Unknown at 8:25 PM