Short-Tempered Melancholic: A description of my mental state after reading this

I don't know what that means.

Short-Tempered Melancholic and Other Stories
By Arina Tanemura 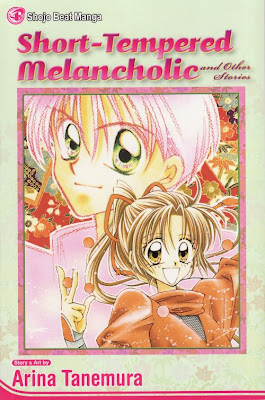 Arina Tanemura is apparently incredibly popular, for some reason. Me, I've never been able to get into her stories much, mainly due to the overly-stylized art, with characters sporting eyes that take up about a third of the surface area on their faces. But the kids seem to like her, or at least Viz wants them to, because they've been running excerpts of her various manga series in Shojo Beat every chance they get. So why not give one of her books a try?

This short story collection probably isn't her best material, if only because the limited length doesn't allow much development of characters or themes; instead, we get four stories about girls trying to find a boyfriend. Tanemura does exhibit her flair for likable, high-energy heroines though; each of the protagonists here fits into the mold of the cheerfully flighty and exuberant teenage girl. The love interests aren't quite as interesting; they're all blandly handsome boys who end up falling for the cute heroines. But it's a book for girls, so the boys don't need to be much more than eye candy, do they?

In the first story, which shares its title with the book (although I don't know what that title means, since none of the characters exhibit any short-tempered or melancholy), Kajika is a member of a ninja clan who doesn't do a very good job of keeping her abilities secret, opening her family up to the possibility of an attack from rival families who are trying to steal their secret weapon. But being a teenage girl, she has a crush on the cute Fujisaki, and when he urges her to be more ladylike, she decides to give up her ninja ways. Being a short story, all this happens in the first ten pages, leaving the rest of the story to detail the consequences of her decision. Not to spoil anything, but it turns out that there might be an ulterior motive to getting her to give up ninja-ing. We eventually get some actual fighting, but it's of the silly kind that is resolved in one panel: 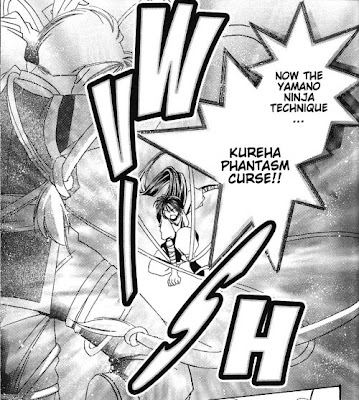 This is a shojo manga; it's all about the emotions and whatnot; no time for action! The story is actually two chapters long, so after the initial conflict is resolved, another one arises, in which Kajika's childhood friend Yuga decides to receive ninja training from her grandfather in order to go up against Fujisaki in a battle for Kajika's heart. But will she ever figure out that Yuga likes her? I wonder.

The second story, "This Love Is Nonfiction", uses one of the standard romantic comedy premises (seen in movies such as The Truth about Cats and Dogs), in which a less attractive girl passes off her pretty as herself to a guy she likes but has never seen face-to-face (in this case, he's a pen pal). Karin is the pretty friend (so the script says; she doesn't really seem any more or less attractive than her friend Yuri, outside of her long, flowing hair), and she meets up with Yuri's friend Ryo: 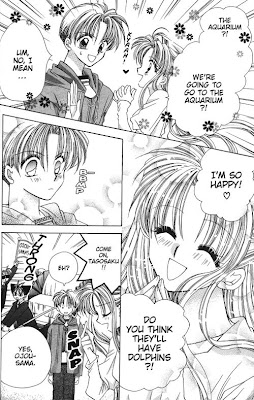 She's supposed to explain the situation, but she ends up going on a date with him and maybe even falling for him, because she's that type of flighty Tanemura character. Yuri chases after them as they hang out in an aquarium, and she keeps bumping into a weird guy wearing glasses and a surgical mask who also seems to be following the pair. Any clue where this is headed yet? Don't worry, there's no yelling or tears; it's going to be a happy ending for all involved.

"Rainy Afternoons Are for Romantic Heroines" is a bit less silly; in fact, it might have the most interesting relationship in the volume (or maybe I'm just saying that because the love interest seems to have actual emotions). Minori keeps "accidentally" forgetting her umbrella so she can get Takato, the boy she likes, to walk her home. He acts grumpy about it, but he still walks with her, and she worries that she's just harassing him. But we see that he still waits for her; maybe he reciprocates her feelings? 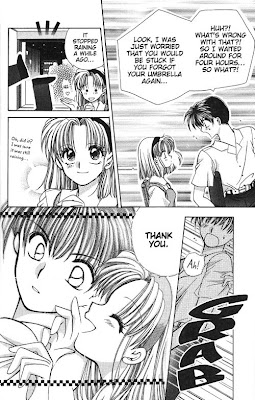 There's some goofy plot about a boy that Minori rejected in junior high, and some talk about Takato not believing in love, which causes Minori to swear to "awaken his passion". It's the normal Tanemura stuff, but I did like that central relationship, in which the couple quietly grow closer together.

Finally, there's "The Style of the Second Love", which was Tanemura's first published work. It's about Mana, who secretly likes her best friend Yume's boyfriend, but doesn't want to ruin their relationship. There's also Nakamura, who keeps bugging her, but she finds herself annoyed by him because he's popular with all the girls. Will she ever be able to get over her feelings for the guy who is off-limits, and realize what's right there in front of her face? 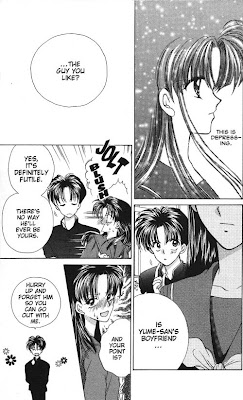 This one definitely seems like an earlier work, if only because Tanemura didn't draw eyes quite so gigantic at that point. But otherwise, it's pretty much the same as the others, with silly comedy and simple teenage romance.

So has my opinion on Tanemura changed? Well, I think I can see why she's popular, since she crafts some pretty fun characters and seems to get at the kind of relationships that teenage girls would like, but the appeal seems like it would be limited to those still in that age bracket. Anybody who has matured past that adolescent stage would probably be more interested in something weightier. I think I've also gotten used to Tanemura's art, if only through regular exposure, but I'm still not a fan of the giant eyes; when characters' irises get distorted to a kidney-like shape, that's just freaky, and not at all appealing. But I do see that Tanemura has a skill at goofy comedy, especially of the physical variety, and she comes up with some decent character designs (for the girls at least; they boys all look the same to me).

So I don't think I'm going to convert to Tanemura fandom anytime soon, but I would probably give her stuff a recommendation to teenage girls who want to read some manga. It's the kind of comic that I recognize as not being terrible, but definitely not falling into my area of interest. So interpret that as you like.

This review was based on a complimentary copy provided by the publisher.
Posted by Unknown at 8:00 PM