After reading Brian Heater's interview with Nate Powell (part one, part two), I'm really interested in checking out his new book, Swallow Me Whole. I liked Powell's previous work, Please Release, and this one seems like a fascinating exploration of juvenile mental illness. I'll have to try to acquire a copy.

Also, Mark Andrew Smith has posted a fairly lengthy preview of the new volume of The Amazing Joy Buzzards on Myspace. If you've seen me raving about this series before, but have yet to experience it, here's your chance. The new book comes out on November 19!

And while I'm linking to previews, here's a page with a bunch of previews of the stories in the upcoming Liquid City anthology of comics from Southeast Asian creators. Lots of good-looking stuff. 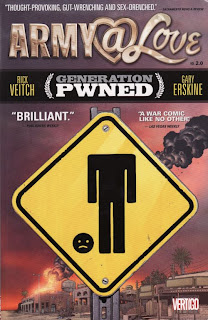 What with collaborating with Alan Moore, crafting exquisite European-style fantasy and science fiction comics, doing stories that comment on the superhero comics industry, pioneering the field of dream comics, and much more, Rick Veitch has had a long, distinguished career, but he's nowhere near ready to lay down his pencil. With Army@Love, he has created a unique and crazy satire of the war in Iraq, and modern American life in general. When you read it, it's hard to believe the audacity (and believability) of what you're seeing; Veitch has turned a harsh magnifying glass on the superficialities of American culture, and while it's funny stuff, it makes you sick to realize how truthful it is.

In the near future that Veitch posits, military service has been re-branded as "peak life experience", like an extreme sport for the newest generation. The military is sponsored by a variety of corporations, including one "Polka Cola", and they throw regular "Motivation and Morale" retreats, which are basically sex-drenched orgies that get the troops to ignore anything going on above their belts. The culture of marketing has taken over, encouraging soldiers to join the "Hot Zone Club" (by having sex in the middle of a war zone) and treating life and death as mere commodities like anything else. It's pretty ridiculous, over-the-top stuff, and while it's played for laughs, it's scary because it's not that far removed from our current reality.

Veitch populates this scarily plausible setting with a large, thoroughly unsympathetic cast of thrill-seekers, self-promoters, ladder-climbers, schemers, liars, conmen, and just plain unlikable people (there are one or two possible exceptions, but everybody gets a chance to lower themselves). Nobody escapes Veitch's ire, from the high-level officers who worry about their own personal careers more than the good of the country or the men under their command, to the enlisted men and women who have no interest in the good of the country they are occupying outside of how much of it they get to blow up, to the civilians who treat the war zone as just another profit opportunity, importing predatory salesmanship and credit practices to the rest of the world. While it's enjoyable and amusing to watch these despicable specimens screw each other (both literally and figuratively) and pursue their all-too-temporary gratifications, it's also painful, since you see the complete disregard they have for their fellow man.

The question is, does Veitch make his satire too subtle? At times, it seems that the commentary gets buried below the plot and character developments. I would compare it to two other contemporaneous series which address the Iraq War: DMZ and Special Forces. While the former isn't meant to be humorous, it uses a fictional setting to address very real concerns. And while Kyle Baker's series is hilariously funny and full of large-scale, action-movie thrills, it makes a point of commenting on real-world events, refusing to downplay any of the anger at what is happening in the world. Army@Love, on the other hand, seems to lose track of the satire at times, getting caught up in the soap-operatic relationships of its cast and some futuristic science fiction ideas. Of course, that's Veitch's prerogative, but it's a shame to see him back away from such caustic provocation in favor of detailing the exploits of his repulsive characters. Or maybe the satirical edge is dulled by reading the chapters in close succession to each other; in a monthly format, the setting may re-emphasize itself with each installment, rather than settling into the background over the course of a long story.

But whatever the case, Veitch has crafted a compelling world here, and it's an enjoyable read that refuses to ignore the state of the world today and the effects and consequences of our society's current actions. The following panel is a good summary of the book's themes (and the source of the volume's subtitle):

I highly recommend it, and can't wait to read the follow-up miniseries, Army@Love: The Art of War. Hopefully, Rick Veitch continue to wow us with his storytelling skills and satirical wit for years to come.
Posted by Unknown at 10:09 PM