Damn, I'm such a liar when it comes to promising new posts. Do readers just laugh when I say "I should have a review up tonight"? Oh well. Here's the one I was hoping to get to.

But first, I'll link to my Comics Bulletin review of Air #1 that I mentioned yesterday.

And I also wanted to point out this odd little "weird romance" comic by Jim Rugg and Brian Maruca in New York Magazine. I guess it's part of the "fashion" section? 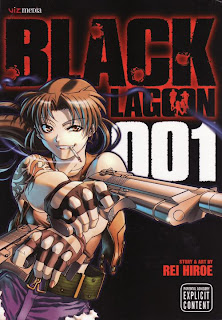 The name of the game here is action, of the "nonstop explosive" variety, if you believe the blurb on the back cover. Guns! Explosions! Chases! Shootouts! Swearing! Improbable acts of physics! Poor characterization! Nonsensical plots! Yup, it's all here. Of course, while action comics can occasionally rise to the level of artistic excellence, all we really need from them is to be entertained. Provide that visceral thrill, and execute something unexpected, and you can forgive a lot. Of course, that's easier said than done.

This manga series makes the attempt, but for me, it falls short in a lot of ways. Not that it's a bad concept or anything. In the first chapter, the crew of the eponymous "courier" boat that regularly tools around the South Pacific starts off by kidnapping a Japanese businessman and stealing a disk containing some sort of vital McGuffin-esque information. Said businessman, who bears the embarrassing name of Rokuro Okajima (man, poor guy, who would want to be called something like that? Okay, it's a joke that makes more sense in Japanese, I'm sure), gets the shaft from his company; they pretty much give him up for dead rather than make a deal with criminals. Or something like that. But this gives him the impetus to say "screw it" and join the crew of the ship, rechristened with the nickname "Rock".

The rest of the crew consists of Dutch, the captain; Benny, the pilot/mechanic; and Revy, the interesting one (she's on the cover of the book, after all). She's a hotheaded, trigger-happy, badass tough chick, nicknamed "Two Hand" due to her John Woo-inspired shooting style. Of course, that's pretty much the extent of her personality: she shoots stuff! And swears a lot! And gets mad all the time! And wears teeny-tine cutoff-jean-shorts! There's a hint at a tragic backstory, which will surely be explored at some point, but as of this volume, she's little more than a source of badassery, the go-to member of the team when bad guys need to be killed.

So, okay, we've got some thin characters and some plots on which to hang some action, but is it worth reading? That is, is the action cool enough to make up for the shortcomings? Well, I'm sad to say that aside from some inspired touches, the action doesn't manage to save the book. It does come close; the setup for the action scenes are pretty good, but the execution is lacking. The problem is, the scenes aren't defined well enough; it's impossible to follow exactly what is going on. For instance, a scene in which the Black Lagoon is being attacked by several other smaller boats is impossible to follow; you can't tell where the boats are in relation to each other, so scenes of Revy jumping from boat to boat and blowing guys away with a grenade gun and a submachine gun are little more than collections of speed-line-heavy panels depicting jumping, shooting, and explosions: 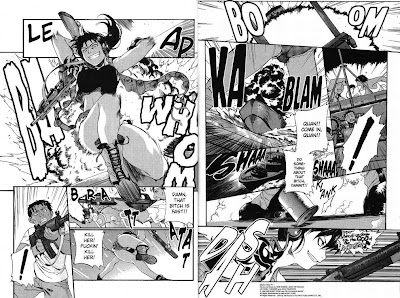 Hiroe's art style reminds me of Adam Warren, if only because of the way he draws characters' pointed incisors. But that begs the comparison to Warren's excellence in action, and Hiroe simply can't compare. In the big ninja fight at the end of Empowered volume 3, the action was frenetic and complicated, but never difficult to follow. Warren makes his action exciting and entertaining without sacrificing clarity; Hiroe could stand to study his work and learn something. Unfortunately, most all the action here is of the variety above; it's just not clear enough to successfully rescue the weaknesses of the rest of the book. For an action-movie comparison, it's not at the John Woo level; it's more like The Transporter or The Boondock Saints, with scenes where you can't tell what is going on and have to try to figure out what happened from the aftermath.

And it's a shame, because there's some fun stuff here, like a big fight confrontation involving a helicopter and a torpedo, or a running gag reminiscent of Frank Miller's Daredevil in which the crew's favorite bar always getting destroyed. And the first panel on the first page is one of the best book-openers I've seen:

The final (and longest) story in the volume features a doozy: a former assassin disguised as a French maid who totes a bulletproof umbrella gun and a Desperado-style suitcase containing built-in weapons. But as goofy as that concept is, Hiroe keeps it from being lighthearted and funny by weighing the story down with tiresome emotional scenes between her and her charge, the young heir to a Colombian cartel (who, in a morally murky plot, is kidnapped by the crew to be sold into child slavery. And these are our heroes!), who can't stand to see her use violence. But it all ends with tears and hugs, and a gratuitous girl-on-girl fistfight.

So I really can't recommend the book, although it should probably be noted that I have pretty high standards when it comes to action storytelling. Or do I? All I really ask is to be entertained, but if the action is hard to follow, the plots are dumb and pointless, and the characters are paper-thin, there's just not much entertainment there. Your mileage may vary, of course, but mine ends up being rather Hummer-esque.

This review was based on a complimentary copy provided by the publisher.
Posted by Unknown at 9:53 PM