Aces: Curse of the Red Baron: Is this book aces, or is it cursed?

Huh, looks like I'm slacking off a bit this week or something. Is it because I'm trying to finish Catch-22 before I start reading more comics, to keep my review queue from growing too long? But I started reading it so I could catch up on the backlog of reviews! How ironic. Anyway, here's the real post: 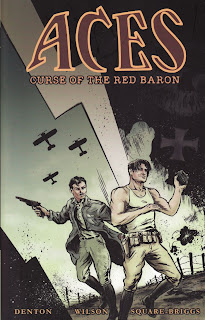 This book is a rousing action-movie-style adventure, or at least an attempt at one, set against the background of a World War I. Since I've got war on the mind lately, that might be why I found it kind of distasteful. But if you're able to separate the "fun action" and "horrors of war" parts of your brain, you might be able to enjoy it.

Of course, that depends on the actual quality of the storytelling, which is not horrible, but it's not exactly exemplary either. Shannon Eric Denton (The Revenant, Gutwrencher) and G. Willow Wilson (Cairo) put together a decent hook for a story, with an English pilot and an American soldier who both believe they shot down the Red Baron embarking on a quest to find the Baron's treasure, following a map that Heath, the Englishman found in the wreckage of his plane. They end up encountering what seems to be the ghost of the Red Baron, getting involved in a conspiracy plot involving a secret society called the Black Hand, and encountering a crazy sci-fi scheme. Many of the twists and turns of the story are pretty silly, but, as mentioned before, this is action-movie material, and it doesn't really aspire to be anything more than a light romp.

It all works well enough, although if this was a movie, a comedian like Patton Oswalt or Michael Ian Black would get hired as a script doctor to punch up the dialogue, because what is intended to be snappy banter ends up pretty dreadful: 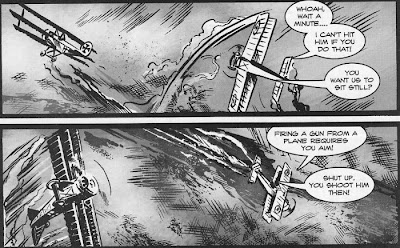 And while the Black Hand plot sort of works as a threat, I dislike the implication that humanity had to be manipulated into committing horrible acts upon each other; it's a poor explanation for man's inhumanity to each other, and it seems to miss the point of looking at why people decide they have to kill one another. Plus, the conspiracy turns out to be one of those ridiculous ones where they are trying to prevent some awful future event from occurring, only to discover that (*gasp*) they are the ones who caused it! Not exactly an unexpected twist, that. An epilogue looks at the history of World War I and the Black Hand's supposed involvement (from the assassination of Archduke Ferdinand on), and it proffers a more satisfying explanation for their activities, in which they were trying to demonstrate the horrors of war to the world. That's exactly the thing I was complaining about above, but I still prefer it to fantastical sci-fi motivations.

But as I said, that sort of thing is my own bone to pick with the story, so the book really lives or dies on how effective the action and adventure are. And unfortunately, Curtis Square-Briggs might not have been the best choice to bring the story to life, because his style is kind of rough, scratchy, and static, making a lot of the action hard to follow. He uses a lot of deep shadows, so not only can it be difficult to tell characters apart, it can be tough just to figure out what they are supposed to be doing. And outside of some close-ups, characters have a very limited range of expressiveness, sporting only minor variations on the same facial expressions throughout the book: 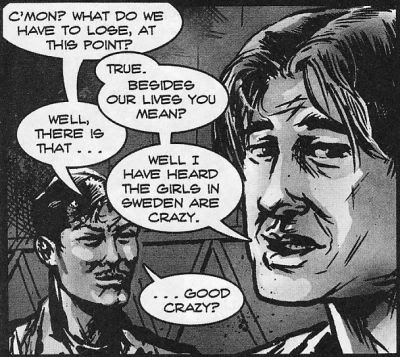 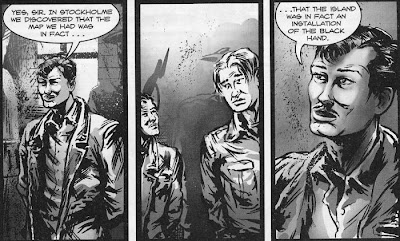 Square-Briggs does manage to deliver some fairly good depictions of flight (although not consistently; see the first panel above for an example of confusing plane movement), showing the low-tech, early-20th-century biplanes swooping and twirling throughout the sky: 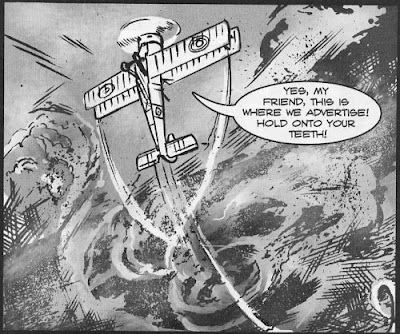 I would love to see a comic that really focused on aerial combat; it seems like a great subject for the visual medium; we don't get that here, but it's fairly satisfying for what it is.

The best part of the book is the aforementioned epilogue, which runs through some historical details of World War I, attempting to tie the Black Hand's villainy into the real-life events. It turns out to be pretty interesting stuff; I would have been fine just reading a book-length version of these recitations of facts and figures. Especially when it contains cool stuff like this: I have no idea if that invention is real, but I do think it is awesome.

So unfortunately, I have to give this book a thumbs-down, but others might appreciate it a bit more than I did. It's definitely not terrible, but between the implausible plot, poor dialogue, rough artwork, and light treatment of war, it tipped the balances to the negative side of the scale. Make of that what you will.

This review was based on a complimentary copy provided by the publisher.
Posted by Unknown at 11:05 PM