In case anybody didn't see it, I wrote a review of Radical Comics' Freedom Formula #1 over at IndiePulp, so you can read all about that one.

Also, I promised a while back that I would link to the trade version of Cory Doctorow's Futuristic Tales of the Here and Now when it was available, and I figured out where it can be found today. So go here to (legally) download it, in CBR or PDF versions. Having read most of the stories contained within, the only one I can really recommend is "Craphound", but I guess the others are worth a look if you haven't read any of Doctorow's fiction. Otherwise, I would stick to his original short stories or novels, most of which are available for free download online. For instance, his new young adult novel, Little Brother, is available here. I've got to read that one when I get the chance.

And now, I'm about to get caught up, just in time to start reading comics again: 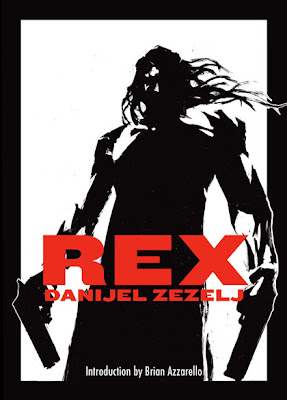 While Croatian artist Danijel Zezelj might be a fairly minor figure in the U.S., known mostly for his work on some Vertigo titles like Loveless and El Diablo (or the still-unfinished Desolation Jones; who knows if Warren Ellis will ever get around to finishing that one), he has been working steadily in Europe for the last fifteen years. Upstart publisher Optimum Wound definitely sees some promise in these earlier works, because they've snapped them up for publication, starting with the 1995 book Rex. It certainly seems like a good move; Zezelj has a cool style that definitely deserves more attention.

It's interesting to compare this early work to Zezelj's current output; you can definitely see how he has refined his heavily-shadowed style over the years. At this point, he seemed a bit more frenetic, filling pages with splatters of ink to create pools of shadow (and lots of blood). Or maybe he was just amping up the grotesquerie to fit the ultra-noir trappings of his tale.

You see, this book is a tale of revenge, and not much else. The titular character used to be a heroic, virtuous, crime-busting cop named Bill Orlowski, but we only get to see those days in flashback. That era ended when he was framed for drug trafficking and sent to prison, where he transformed himself into a hugely-muscled animal of a man, renaming himself Rex and focusing only on murdering those who wronged him, preferably in the goriest fashion possible. Noir isn't really the right description here, since the morally-murky twists of the genre are pretty superfluous; the point of the story is bloody vengeance.

Maybe "grindhouse" or "exploitation" would be better terms, since it's a book aimed at satisfying the most bloodthirsty urges of its audience. And it certainly does that, with a series of gritty, nasty scenes of Rex being grievously injured in prison and waging his personal campaign of terror on his antagonists. This could be a pointless exercise in nihilism, but it becomes readable (depending on your aptitude for this sort of thing) simply due to Zezelj's style, which gets splattered all over the pages like it's flowing straight from his veins. He renders characters in a baroquely high-contrast style, showing every rippling muscle, wrinkle, wound, and scar in a criss-cross of black lines that cover their bodies and faces: Action scenes are full of visceral intensity, with bodies crashing into each other violently in a jumble of brush strokes: 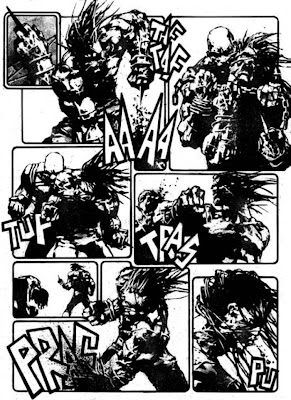 And there's plenty of other violence as well, with gunshots, car crashes, the works. It's all so over the top that you can't possibly take it seriously, but it definitely makes for an enjoyable, if somewhat stomach-churning read.

The translation isn't perfect, but it's serviceable, and its choppiness might even enhance the noir-ish nature of the story. I do like the sound effects, which remind me of those in Richard Corben's comics, and the occasional bits of mood-setting poetry that are delivered via caption are pretty amusing. Here's a sample:

Overall, it's not an essential, unmissable read or anything, but it's a pretty interesting diversion, especially if you're interested in Zezelj's work. Optimum Wound has plans to publish more of his European comics, so it should be fascinating to see the further evolution of his style. And who knows, maybe he'll include a weightier story along with it.

If you're interested in reading the book, it can be purchased from Amazon, and it has also been serialized online, starting here.
Posted by Unknown at 8:19 PM