Dragon Ball: A joke about testicles here would not be inappropriate

But I do have another review of Fantastic Four: True Story #2 up at Comics Bulletin.

And I did want to link to this short comic by Hope Larson and Bryan Lee O'Malley. Enjoy. 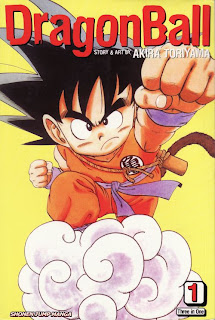 I haven't read a whole lot of shonen manga, possibly due to a subconscious condescension toward the genre. It's aimed at little kids; it can't be worth my valuable time! But I do often hear that some shonen series are quite good, so I feel like I should check some out. But then there's the other factor: length. Many of the series are intimidating in scope; series like One Piece, Naruto, or Dragon Ball last for dozens of volumes and would potentially make for months or years of reading. If I start, will I ever be able to finish? And if I'm ever going to try to read some of these, where's the place to begin? If I go with a more off-the-wall series, like, say, Beet the Vandel Buster, will it not be good enough, and thus taint my interest in the entire genre?

Well, why not just jump in to one of the most popular series from a respected creator? Dragon Ball is an incredibly well-liked manga, and Akira Toriyama is somebody who I've really enjoyed in the past, so why not start at the beginning and see how it goes?

While the series as a whole is overwhelmingly long, it's easy to jump right into at the beginning. In short order, we get introduced to Son Goku, a young, monkey-tailed orphan who lives in the wilderness. He's pretty sheltered, so he's pretty surprised when a girl named Bulma shows up and disrupts his life. She's looking for all the "Dragon Balls" in the world, mystical jewels which, when all seven of them are collected, will summon a dragon god who will grant one wish. She already has two of them, and Goku has a third, left to him by his late grandfather. Bulma ends up recruiting Goku to join her on the quest for the Dragon Balls, and they embark on a series of wacky adventures looking for them.

It's pretty enjoyable reading, since Toriyama has built an interesting, unique world, full of futuristic technology, talking animals, mystical creatures, magic, and dinosaurs. And the characters are tons of fun to spend time with; Bulma is faux-sophisticated, but still young and naive, while Goku is so sheltered, he's astonished at everything he sees, including the differences between boys and girls: 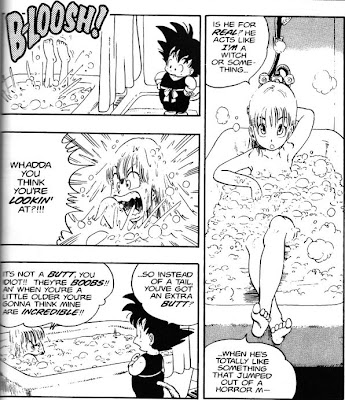 He's also incredibly strong, so he ends up in plenty of fights and other adventures. He has a magical extending staff, and in the course of their journeys, he acquires a cloud that he can fly around on, but it only works for those who are pure of heart. He seems to qualify simply due to his ignorance; he's so simple and clueless that it comes across as a complete lack of guile.

Plenty of other characters soon join the fray, including Oolong, a shape-changing pig who is obsessed with girls' pantiesl; Kame-Sen'nin (a.k.a The Turtle Hermit, a.k.a Muten-roshi, a.k.a the Invincible Old Master), a weird, horny old man who is also obsessed with panties; Yamcha, a badass thief with a mastery of martial arts and a deadly fear of girls; and Pilaf, an evil, dictator who is also collecting Dragon Balls. It's constant hilarity, and surprisingly, the Dragon Ball quest reaches its goal before the end of the second volume. I wasn't expecting that; it seems like the sort of story that could be dragged out for several more volumes. Of course, it ends in just about the silliest way possible, leaving the possibility of another quest in a year's time, when the Dragon Balls become eligible for collection again (that's the rules of the game, I guess). In the meantime, Goku decides to go for training with the Invincible Old Master, who, despite his goofy look and complete lack of morals or decency, is the great martial arts master who trained Goku's grandfather.

This training sequence takes up most of the third volume, as Goku is joined by Kuririn, a fellow trainee who is a bit more on the worldly side (he can tell the difference between boys and girls, for one). After a lengthy qualifying feat that sees a new member join the cast (Lunch, a girl who changes personalities from sweet and nice to mean and violent whenever she sneezes), they end up going through an over-the-top, cartoonish version of the training sequences in martial arts films. The Turtle Master has them run all over the place delivering milk, plow large fields with their bare hands, swim through shark-infested waters, and dodge a swarm of bees while tethered to a tree. Amusingly, he says that while they might already be skilled, the goal is to "break the wall of humanity" and achieve superhuman abilities. Hey, sounds logical to me.

After eight months of training, they end up entering the Tenka'ichi Budokai, a martial-arts tournament that will determine "the strongest under the heavens". When they get there, they discover that all the training has given them amazing speed and strength. While they worry that they might not be able to compete against the hundreds of other contestants, they both easily make it to the finals, which will mostly take place in the next volumes, seeing them compete against a variety of strange characters, which include a dinosaur, a powerful old man, a sexy girl, and a disgusting fat guy who fights with the power of his stench. It should be incredibly fun to see it play out.

So, it's a hell of an enjoyable story, due to Toriyama's skill at setting up fun situations and populating his crazy world with quirky characters. Being a story aimed at the younger crowd, it's chock full of bathroom/anatomy humor, with joke after joke about butts, boobs, wee-wees, poop, panties, and so on. It seems a bit weird, considering the difference in cultural appropriateness between Japan and the U.S., but it's still quite funny; Toriyama has a great sense of timing: 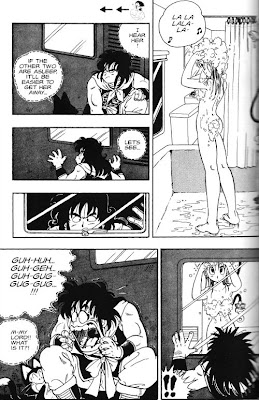 He's also good at upending expectations; when the evil Pilaf captures Goku, Bulma, and Oolong, he grabs Bulma, intending to torture her to get her to reveal the location of a hidden Dragon Ball, the most degrading act of torture he can think of is this: 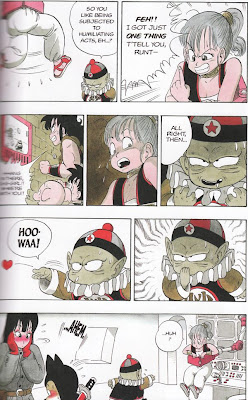 He also pulls off some nice wordplay (probably more so than we realize, considering how difficult it is to translate a lot of Japanese puns; the translators should be commended for what does come through). Pilaf makes for an especially rich source of comedy; he and his cohorts are known as the Reich Pilaf, and he's constantly using phrases like "order of Pilaf", "side of Pilaf", and so on. I don't know, it's silly, but it cracks me up.

And the action! Considering that there are still a few dozen volumes of constantly-escalating stakes to go, the fighting here is already pretty exciting, with Goku seeming near-invincible. Toriyama has such a dynamic style, it's super-fun to watch people get beat up: 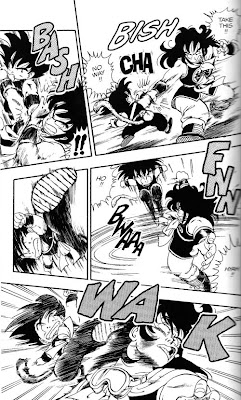 Like the rest of the story, I can't wait to see what he comes up with next.

I should also mention that the series is apparently based on Journey to the West, a classic of Chinese literature. I'm not especially familiar with the story, and I'm not sure how exactly this series maps onto it, although I'm pretty certain Goku is the Monkey King, and Oolong is Zhū Bājiè (a.k.a "Pig"). Perhaps the rest of the connections are yet to come.

So I'm certainly glad I gave this story a shot, because I think I've quickly become an addict. Toriyama has a skill at crafting page-turning stories that make you highly excited to find out what will happen next. It's ridiculous; this is kids' stuff, but I can't tear myself away. I'm going to have to keep reading and see where it goes. I don't think I have any other choice.

This review was based on a complimentary copy provided by the publisher.
----- 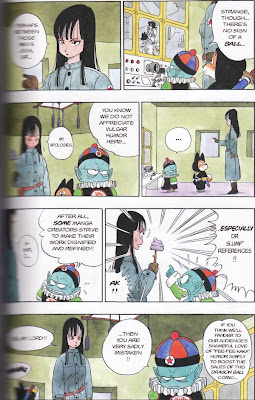