Pocket Full of Rain: I feel like my pockets are full of excellence

I thought there were a few things I wanted to link to, but should I bother? Ah, why not:

Alison Bechdel has a strip she did for Entertainment Weekly on her site; it's about all the books she feels like she should read but was never able to get to. I feel her pain.

Huh, maybe that was the only one. Okay, here's something good:

Pocket Full of Rain and Other Stories
By Jason 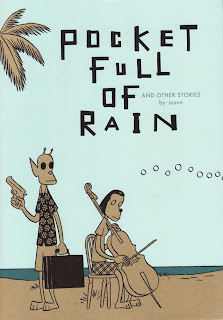 Norwegian cartoonist Jason has such a unique style, with his animal characters and deadpan humor, that it's hard to imagine him making comics that look any different. But this compilation of his earlier work from 1992-1999 shows us exactly that, giving an eye-opening view to the process of his artistic evolution. We see him try out all sorts of different styles, from realistic, to somewhat cartoony, to versions of his animal characters, with some of them mixing with humans, through to the motif he eventually settled on and continues to use. It's fascinating to watch, and since he's such an enjoyable storyteller, the stories themselves make for great reading aside from the interest in the art.

The longest story here is the one that gives the book its name, a 44-page 1995 story that sees Jason using a realistic style to examine some of his familiar themes, like relationships which are affected by the past of the participants. It follows one of Jason's typical disaffected young men, a police sketch artist named Erik who meets a girl and finds a genuine connection with her. But her previous boyfriend, a dangerous hitman with a penchant for blowing soap bubbles, shows up and causes trouble, forcing them to flee to what they think is a safe location. It's an odd story (although not when compared to Jason's other work), with plenty of strange, surreal touches, like a zombie panhandler who lurks in the background, the fact that the criminals that Erik sketches are all aliens or monsters, or a scene involving hats: 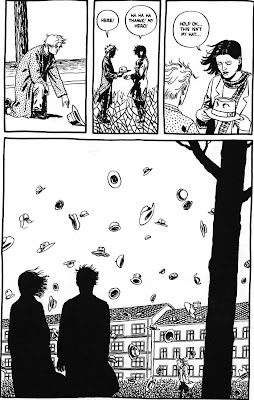 But the weirdness, while adding spice to the story, only serves to make the realistic human moments stand out. It's beautiful to see the relationship play out, and the difference in how Erik interacts with his best friend (all their conversations seem to be made up of movie quotes or discussions about pop culture) versus his girlfriend (whose name we never learn) shows what he sees in her. He can talk philosophy with her, or bare his soul about love and death. It's wonderful to watch, and it shows that Jason had the human element of his stories down even at this early date.

As mentioned, the art takes a more realistic style, making for an odd disconnect, since this certainly feels like a Jason story, but it looks so different. He does a nice job of it though, using some interesting shading effects, and I like the way he uses thick black brushstrokes to depict wrinkles in fabric:

And we can still see some recognizable touches, like the flying sweat drops that are used to show nervousness: 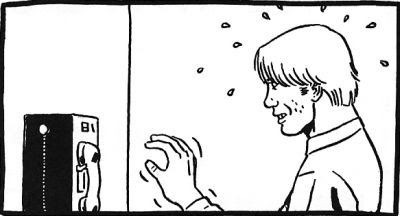 Jason also tries out some other styles through a couple dream sequences, one of which uses a more cartoony style that we'll see him try out later, and another that seems to use an old, folkloric style of artwork: 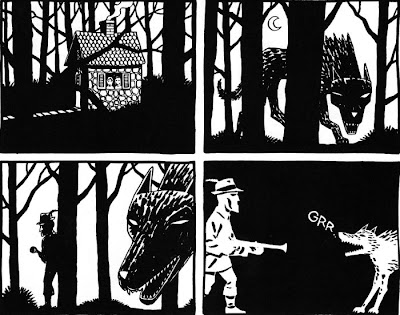 It's quite good, and it sets a good tone for the rest of the book, which is mostly filled with shorter works and ephemera. There are several one- or two-page strips in which an author avatar talks with an animal character about mundane matters, sometimes punctuated with a dog showing up and shooting one of them. A few seemingly-autobiographical bits that highlight Jason's personality. Some of them are semi-realistic, and some feature versions of the eventual animal characters. It's interesting to see the animal style develop; at one point it was more three-dimensional and rounded: 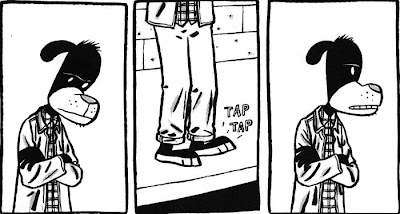 But as the years progress, you can see how it became the flat style that still persists. Other sections of the book see some goofy, surreal science fiction stories, like 1992's "Invasion of the Giant Snails", which sees a character named Sam Space fight off some gangsters using bananas and hair dryers (because they are shaped like guns). It's a strange story that rests on dream logic, and provides laughs just because of the weird non sequiturs. 1998's "Spacecat" is a funny, short piece in the style of Golden Age sci-fi comics, in which a cat hero rescues a space princess from an evil mad scientist. One of the weirder strips is the 1998 "X-Pilt", which combines The X-Files with a bizarre Norwegian children's show that apparently wounded the psyche of anybody who grew up there in the 70s:

Later in the book, there are a few other of these weird, dreamlike comics, with the most effective probably being 1997's "Kill the Cat". These are a bit less comic and more disturbing though, bringing that morose Scandinavian mindset to the page. There's also a pretty good comic from 1997 about the breakup of a relationship called "Falling". And my favorite of the short pieces is probably 1997's "Papa", which takes a cue from the film The Killers (which was based on a story by Ernest Hemingway, whom Jason is obsessed with), seeing a couple of shady characters show up at a small-town diner and terrorize the people there, planning to do something to the old man who often frequents the establishment: 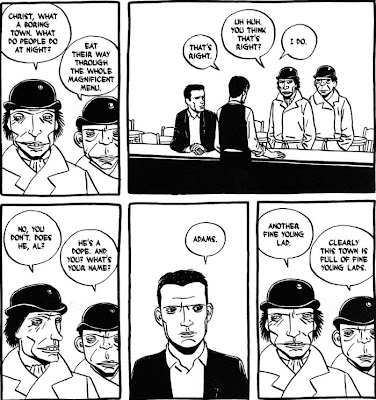 Then, one of the patrons visits the old man, who seems to be based on Hemingway himself. The old man feels old and useless, unable to write like he used to. That's about all there is to it, but it's a creepy and emotional little story.

The final large segment is a series of newspaper strips from 1998 which were submitted to a paper but never accepted. It's a weird, surreal, funny strip, following a guy dressed in a striped prisoner's outfit (complete with a large metal ball shackled to his leg) as he wanders a desert landscape, interacting with ghosts, animals, and sentient cacti. It's pretty absurd, but it has a goofy, deadpan vibe, and some enjoyable breaking of the fourth wall:

Rounding out the book is a section of the beautifully painted color covers to Jason's anthology series Mjau Mjau, where most of these stories were originally published. And the table of contents, which is the last thing in the book, has some essential author's notes, giving background on many of the stories.

Overall, it ends up being a nice book, if not really among Jason's best work. The title story is a good addition to the author's well-known works, and the rest of the stories are interesting glimpses into his mind, but the main appeal of the whole volume does seem to be seeing the development of his style. Luckily, he's such a good artist that even his lesser works are fascinating to examine; even though he settled on one style, he is capable of spinning a great story using a large variety of artistic effects. It's probably worth a look for anybody who likes to see European comics translated into English, but fans of Jason's work will definitely get the most out of it. But if they're anything like me, they'll savor the chance, and continue to hope for more work from a great cartoonist.
Posted by Unknown at 10:06 PM