The Amazing Remarkable Monsieur Leotard: Eddie Campbell could illustrate the phone book and I would buy it

That's kind of a cliche, isn't it? I don't know if I would really buy an illustrated phone book, no matter who drew it. Hmm, maybe I'll pitch that to Image as a new anthology series. Anyway: 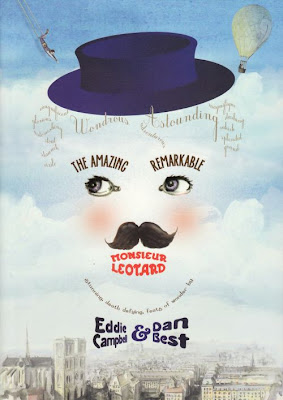 Eddie Campbell has such a unique style of comics storytelling, both in his distinctive artwork and the manner in which he tells stories. While he is still probably best known for his dark, moody work on Alan Moore's From Hell, most of his other stories aren't like that book at all; they use a freewheeling, enjoyable style, given to wit and whimsy. This new graphic novel definitely fits that paradigm, seeming like a Campbell sort of story even in its genesis (which can be read about here) and it plays out according to his whims.

As described in the link above, the book takes its title from the real-life acrobat Jules Leotard, who invented the article of clothing that bears his name and inspired the song "The Daring Young Man on the Flying Trapeze". But as interesting a character as he is, he dies at the beginning of the book, leaving his nephew Etienne with his last words: "May nothing occur." And that's pretty much what happens to Etienne throughout the rest of his life (and the book); nothing of consequence occurs, but he certainly has a colorful time carrying out that prophecy. He tries to continue his uncle's name and legacy, performing while wearing a false moustache. But he never really finds fame and fortune, and ends up wandering around and getting tangentially involved in various historical events, living out the rest of his life in obscurity.

It's an episodic sort of story, with each chapter seeing Etienne and his circus pals get involved in some sort of business, like the Jack the Ripper murders, or the sinking of the Titanic. But Campbell acknowledges this, titling almost every chapter with some variation on "The Next Episode" and ending each one by having a character make a remark like "I wish we'll all do well in the next episode." It's a knowing, playful style of storytelling, and Campbell goes all out with fun techniques, filling the margins with little drawings that sometimes comment on the story itself, along with occasional footnotes delivering scientific and historical information. One episode, "The Episode of Sleeping", even sees pages dominated by the image of Etienne in bed, while a tiny dream version of himself converses with his uncle, and Campbell and Best pop in to discuss the direction of the story: 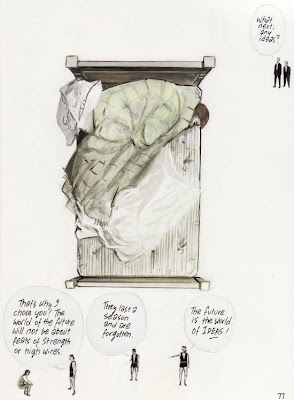 The whole thing is full of that kind of whimsy, and it makes for a wonderful, enjoyable read. I particularly liked a scene in which Etienne loses his virginity to Lenore, the tattooed woman, told in a text excerpt from his diary presented as if it was written on her torso. Another scene sees him try to come up with a different invention to bear the name Leotard, a set of spring-heeled shoes. When he presents himself to Queen Victoria while wearing them, he keeps bobbing around the frame amusingly: 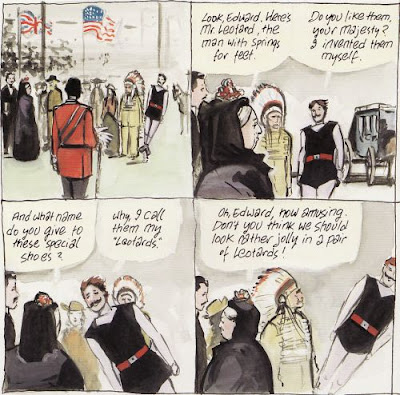 And of course, there's Pallenberg, a talking bear whose intelligence is never explained; he's simply another member of the cast. His involvement in the Jack the Ripper murders ends up being another good source of comedy. There's also an excellent section in which an Charles Blondin recounts the tale of a rivalry with another circus performer that involved a series of increasingly difficult tightrope walks across Niagara Falls: 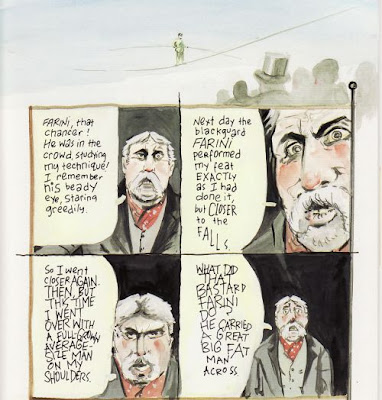 Eventually, the tone of the book shifts to a more somber one, as Etienne and his friends begin to age and near the end of their lives. They all go on one last adventure together, attempting to rescue a colleague of theirs who was (wrongly?) imprisoned for stealing the Mona Lisa. It's a sad series of scenes, but it still ends up being sweet and touching; eventually, Etienne learns that while he might not have become rich and famous, he was happy because of a rich life spent doing what he loved in the company of good friends. Of course, Campbell doesn't make it as sappy as that description; he simply portrays them all reconnecting, and the history which we've already witnessed adds gravity to the situation. It's a beautiful way to close things out.

It doesn't really end up being a very complex story, but it's a satisfying one, due to Campbell's skill at telling it. He makes every scene feel fully-realized, due to the amazing, detail-filled art. The vast landscapes he splashes onto the page are beautiful, somehow seeming both tossed-off and incredibly meticulous. And his character art is always wonderful; he manages to convey motion and gestures wonderfully, while not making them look over-rendered. It seems like a few simple lines and dabs of paint were used in each drawing, but they combine to capture true-to-life details like the way people hold themselves while standing and talking, or facial expressions that can convey a huge range of emotion. And other details can't be ignored: the lettering is wonderfully done, as well. Campbell has a distinctive style of handwriting that works beautifully to convey the way words are being spoken (see the image above for a good example). One of my favorite scenes sees Pallenberg the bear singing while dancing with his handler/lover Ursula on the Titanic, and the letters that form the words of his song seem to dance around the speech balloon along with him: 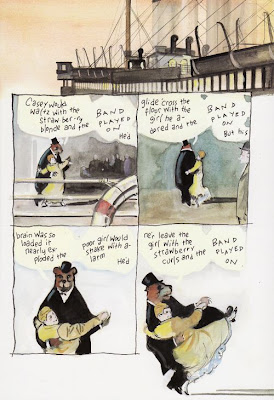 With Campbell, you get the whole package; not a page of the book gets wasted, and there's something to entertain at every glance.

It's just a gorgeous book, a great bit of comics storytelling that uses the form like nothing else out there. Campbell makes comics like nobody else, and the world is richer for having his work in it. Hopefully, he'll be able to keep delivering beautiful works like this for years to come.
Posted by Unknown at 8:11 PM