The Machine Girl: Back to the good old WST

I don't write much about movies anymore, but I figured this was worthy of its own post. 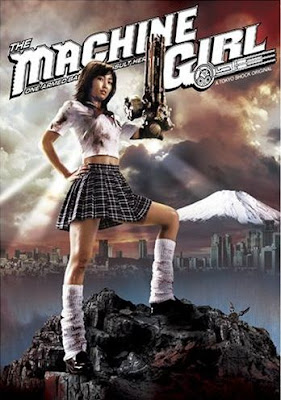 This might be one of the most enjoyable films I've seen lately in the "ridiculous camp violence" category. As could be guessed by the title and plot description, it's Japanese. The story concerns a girl whose brother was killed by a bully who is the son of a ninja Yakuza family descended from Hattori Hanzo, and after she loses an arm, she gets a machine gun replacement and goes on a bloody killing spree of revenge. Good times. Here, check out the trailer:

The opening scene sets up the movie pretty well, even though it's probably some sort of dream sequence that doesn't fit into the rest of the film's chronology. Our heroine, Ami, shows up in an abandoned parking garage (you know, the kind where teenage thugs always hang out) to interrupt a gang of bullies that are picking on a poor kid. She accuses them of killing her brother, whips out her crazy cyborg limb, and sets to murdering them all in the goriest fashion possible. It's the kind of movie where every wound results in geyser-like sprays of blood that drench everything nearby, including the camera.

That scene leads to a flashback (which lasts for the rest of the movie) in which we learn how Ami ended up this way. It's the familiar old story: brother gets killed; arm gets burned, cut, and severed; friendly auto mechanics fashion a gigantic machine gun prosthetic; hilarity ensues. It's all very silly, but there's enough imagination to make things pretty enjoyable, and a refreshing lack of angst-wallowing.

Sure, Ami does some weeping and crying about her brother's death, and in the beginning she vehemently denies the murder charge that her parents committed suicide over, but as soon as she sets out on her quest to bring her brother's killers to justice, she decides murderous revenge is her best option, and goes about gleefully killing everybody involved. There's a hilarious scene in which she confronts one of the bullies, and his parents get offended that she would accuse him, so the father starts attacking her with a golf club, and the mother fries her hand in boiling oil, resulting in a terrible, terrible bit of makeup that looks more like feathers than fried batter. But Ami responds by sneaking back into the house, chopping the son's head off, serving it to the mother in some soup, stabbing the mother through the back of the skull (which somehow makes her vomit up her intestines), dragging the son's body into the bathtub where the father is bathing, and dousing him with gallons of blood from the son's neck stump.

There's plenty more of this sort of thing, with each scene ending up crazier than the last. After Ami is captured by the yakuza family and tortured via arm removal, she escapes and makes her way back to the auto garage where her brother's friend Takashi's family lives. Takashi was killed along with her brother, so his mother, a tough former biker chick, hates and blames Ami, but Ami manages to win her over through some fist-fighting and arm wrestling. Of course. They end up teaming up to fight the yakuza family, and get a sweet bonding scene later when they mutually torture a henchman by hammering nails into his face.

The yakuza family is also incredibly enjoyable to watch, since they're so ridiculously over-the-top. Early on, the father and son have a bonding moment that involves sword-fighting and blood-drinking, and a later scene sees them have a swell family moment when they force a chef who spilled soup on the son's lap to eat some sushi topped with his own severed fingers. Hey, family values comes in all sorts of different forms. They also employ a ninja team who call themselves "The Junior High Shuriken Gang" to take out Ami and company, and have their own crazy weapons, including the father's flying guillotine and the mother's drill bra.

While the movie doesn't take itself at all seriously, there's rumination on revenge and whatnot when the parents of the boys who Ami kills get recruited to form their own revenge squad against Ami. It's not very deep or anything, but it's at least an acknowledgment that Ami isn't the only one affected by murder. That's all pretty negligible though; it's really just a showcase for gory, ridiculous violence; you'll get to see holes blown in bodies (and heads), heads severed and exploded, people cut in half both horizontally and vertically, and more fake blood spraying all over the place than any of the Lone Wolf and Cub movies. It's awesomely stupid, and a hell of a good time.
-----

Also of note: when perusing director Noboru Iguchi's IMDB page, I see that he also did an adaptation of Kazuo Umezu's Cat-Eyed Boy and something called Kazuo Umezu's Horror Theater: The Harlequin Girl. Sounds cool, I'll have to see if I can find those and watch them.
Posted by Unknown at 12:53 PM