Drifting Classroom: The end, which surprisingly didn't come from everyone screaming themselves to death 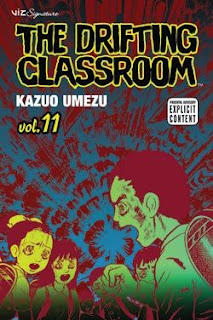 And so ends one of the crazier comics to be made available in recent memory, and, as happens so often in manga, it's a slight letdown, in that everyone didn't die horribly, screaming all the way to their doom.  No, it's a somewhat happy ending here (from one point of view, at least), with only minimal death and gore, but there's plenty of classic Umezu insanity on hand, and a slightly hopeful (but still mostly pessimistic) outlook for the future.  The best moment (for providing an "Oh, shit!" reaction, that is), which demonstrates that even in the course of wrapping things up safely, Umezu still wants to deliver nutty violence, comes when a severed arm (introduced at the last minute as belonging to a guy who is apparently living in both time periods due to being caught in the explosion that sent the kids to the future) violently saves the day at the last moment: 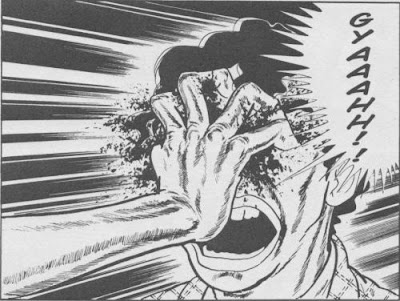 Yeah, that's what we all came for.  The rest of the volume mostly sees the kids decide they can get back home by creating a psychic connection channeled through a comatose member of the group and all wishing to go back to the past really hard.  Surprisingly, it doesn't work, but there ends up being a reason for that, fitting Umezu's metaphorical look at the horrible world created for Japan's youth in the 1970s.  The kids end up stranded in the future, left to repopulate the world and survive on their own, and they vow to make the best of it, with a little bit of help from their long-dead parents.  In Umezu's world, there's no magical, last-minute escape from the situation in which the younger generation find themselves, and they're going to have to figure it out on their own, no matter how difficult things are going to be.  It's as optimistic as things get in this barren post-apocalypse, and it fits right into the extremely exaggerated tone that Umezu has kept up throughout, as the kids go from being horrified and murderous to excited about their brave new world.  Chances are, they'll all eat each other before the month is out, but there's a slight glimmer of hope, just like the dim flicker of a chance that society won't collapse after all the strain adults have placed on it.  Cheers!

And that's it for this particular horrible (or horribly, hilariously enticing) vision of Umezu's, although he's crafted plenty more over the course of his long career, meaning there must be a wealth of insanity just waiting to be placed in our hands.  There is one short story, "The Wish", that rounds out the end of this volume, and it's a good monkey-paw fable, about a kid who wants the hideous puppet friend that he cobbled together from garbage to come to life, which of course actually happens, but only after he has moved on to his next enthusiastic pursuit (actual friends!), the creepy thing showing up to wreak murderous revenge after being so callously discarded.  That's the Umezu we all love; let's see more, please!
Posted by Unknown at 12:00 PM