Elsewhere: I wrote about Werner Herzog's film My Son, My Son, What Have Ye Done? over at The Factual Opinion.

Links:  Here's a tie-in comic to that Hero Tomorrow movie that I wrote about a while back, although I don't know if anybody who hasn't seen the movie would be interested...

This site, which features a bunch of short sci-fi comics stories, seems interesting.  I'm not sure about the quality of art or writing, having only sampled a little bit, but I like the idea of world-building on such a vast scale.  Maybe worth a look, and it could end up turning into something pretty cool. 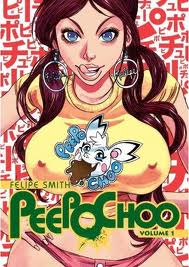 Felipe Smith certainly seems to be living the dream, having been recruited by Japanese publisher Kodansha to create this manga series, and then having his work be translated back into English by the domestic publisher Vertical.  He's achieved modest fame on both sides of the Pacific!  Interestingly, his comics fit into the category that doesn't have a whole lot of traction in the West, at least not in the manga section of the bookstore: the sexed-up, ultra-violent, fairly nonsensical seinen genre, aimed at adult (or "adult", if you prefer) men.  That sort of thing might rule the superhero corner of the American comics market (with a chaste, "cover up the naughty bits and censor the swears" pussification) and provide entertainment for legions of train-riding salarymen, but it's mostly unheard-of over here, lost among the piles of sparkly shojo and spiky-haired "I wanna be the best" shonen.  And after reading this volume, maybe it deserves that lower profile; it's mostly brainless, goofy nonsense, full of blood and tits and cackling laughs and garish, stupid cultural misunderstandings.  Keep it hiding on the shelves of not-so-similar material, and it still has the power of shock, something for people to happen across and goggle at the depravity to be beheld.

Not that it's a worthless exercise in nihilism or anything; Smith is actually quite entertaining in his skewering of cross-cultural fandoms and enthusiasms, and his look at the way Japanese and Americans manage to distort and misappropriate each other's culture is funny and insightful, if incredibly hyperbolic.  Several characters get introduced in this first volume, tied together only tangentially or thematically, but obviously on their way to crashing together as the story continues.  These include a Chicago fanboy of a Japanese cartoon who assumes everyone in Japan is obsessed with it, making it a land of cheerful, cartoonish togetherness; a psychotic yakuza enforcer who thinks he is emulating American gangbangers; a busty teen model/schoolgirl; and a mask-wearing hitman who takes a creepy, sexual enjoyment in the rivers of blood he regularly spills.  They're all destined to collide when the hitman (who moonlights as a comic store owner) takes a trip to Japan for a hit and brings some employees along with him, for little discernible reason.  Smith only just gets started on the expected meet-ups; most of this volume sets up the characters' expectations of what Japan/America is like, sure to dash them all in the most effectively heartbreaking fashion. 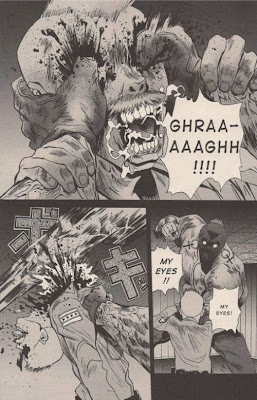 That might be the ultimate aim, but Smith seems to just enjoy coming up with displays of grotesque behavior, with the dial turned up to eleven.  Violence, whether caused by sadistic yakuza or efficient hitmen, is gory and disgusting, with brains and intestines flying and blood spurting everywhere.  Sex, whether real or imagined, is less alluring than kind of gross, the naked breasts covered with drops of sweat (and possibly other fluids), people contorting into weird, unsexy positions, the women all so topheavy that they seem about to burst out of even the most modest garments.  Most of the Americans seem to sport sneering faces, mocking those who like things they don't understand, whether they are superhero fans characterizing manga and anime as weird and nonsensical (and rightly so, if the titular anime is any example, being full of gibberish language, puke, shit, and stupid dancing), or fans of that very Japanese media calling cape comics overmuscled and homoerotic.  All behavior is taken to the extreme, making for an entertaining, if somewhat exhausting, romp through Smith's take on humanity's worst impulses. 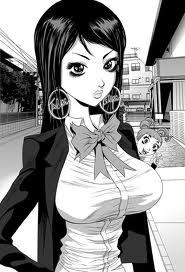 It's a pretty ridiculous collection of craziness, and while it seems like a parade of freakishness as of the end of this volume, it looks like it could go in interesting directions, as Smith takes his established weirdos and bounces them off each other to hopefully entertaining ends.  Or maybe it will just be more boobs, sex, blood, and mocking laughter; either way, it should be pretty fascinating to watch, if only to see something the likes of which doesn't appear on American shelves as often as it could.  There's room for art of all stripes in comics, and the id-engaging, over-the-top appeal to base impulses is as good as any.  More of this, please.
Posted by Unknown at 5:34 PM