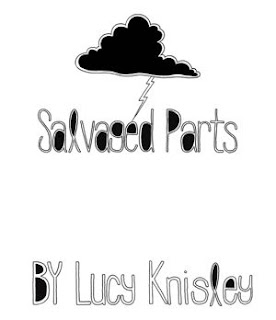 Lucy Knisley's diary-style webcomics are a pretty great example of the autobio genre, winningly cute and humorous but also interestingly self-examining; maybe being regularly posted for free online helps, but she's been successful in print

as well.  And with this minicomic, she has managed to bridge the gap between the two, in a way, offering it as a digital download for the price of two dollars.  It's a way to signify that this is something less frivolous than the cute cat images and descriptions of delicious foods that often fill Knisley's regular posts: an examination of the emotional impact of the (amicable, yet still difficult) breakup with her boyfriend of several years.  It's a heartbreaking grouping of several short pieces, as Knisley considers the empty bed frame left when her ex takes his mattress a symbol of her situation, has a chance encounter with a childhood possession that helps remind her of what is important to her, and receives a beautiful gift from her grandfather that helps her get through her heartache.  As is usual for Knisley's comics, it's all wonderfully illustrated, full of great uses of comics as a visual language to communicate concepts and emotions, with the images combining with the ever-present descriptive captions (a necessity, when communicating a personal message such as this) to become more than the sum of the parts, a beautiful, sad little comic that triggers universal emotions and helps its author deliver her message, shouting her feelings out into the void where then can be recognized and understood by all of humanity.  This is the exciting new frontier of comics in our digital world, and Knisley is leading the way forward.

Also recommended:  Make Yourself Happy, Knisley's collection of various webcomics, including several sessions of hourly comics (in which a cartoonist draws one two-panel strip for each hour that they are awake in a day), a travelogue of a trip to Paris, and a recipe for homemade pickles!
----- 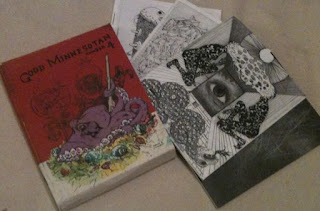 Wow, that's quite a list of contributors, isn't it?  This "issue" of a minicomics series that gathers a bunch of diverse work together from various cartoonists and other artists who live in Minnesota is actually several little booklets, all bound together in an illustrated slipcase, making quite a deal for five dollars.  As with any anthology, it's something of a mixed bag, containing professional-level short pieces by established creators, more messy, experimental stuff from lesser-known talents, and some random photos, sketches, and bits of art that seem thrown in to fill out the package, yet manage to fit the theme of "oddball stuff from up North".  Notable stories include Kevin Cannon's "A Brief History of the Fram and the Men who Loved Her", a bit of history about a ship that several explorers used to try to be the first to the North (and later South) Pole, which contains plenty of Cannon's signature cartoony wit; Tom Kaczynski's "Ransom Strange", a sort of Daniel-Clowes-meets-Richard-Sala bit about a weird doomsayer; Sean Lynch's abstract "The White Dot", which manages to make streaks of ink seem interestingly intense; Lupi's "The Poo Lagoon", about a trio of young people who wonder about the source of the feces they find floating in a public hot spring; Megan Hogan's bizarre "Geirdoz", a photo comic starring some knitted creatures; a weird fable by Anne Bongiovanni  about some kids burying their mom and eating the onions that grow on her grave; a funny one-pager by Will Dinski about the fate of an Evel Knievel wannabe; and a hilariously over-the-top barbarian story by Tim Sievert.  The rest of the sketches, photos, and comics might not be up to that level, but they're mostly interesting at the very least, and some of them make for strikingly different styles, offering a pretty wide range of talent and material, all united by geography.  Not a bad package at all; if you can get your hands on it, by all means, check it out.
-----

This series of minis is masterminded by Jonathan Baylis, although he takes the Harvey Pekar route, handling the writing while various collaborators provide the art.  The first two issues, which came out in 2007 and 2009, respectively, seem to follow Pekar's lead as well, telling autobiographical stories about various subjects, from Baylis' childhood, to his relationship with his girlfriend (and later wife), to what is probably the highlight of the series, a story in which Baylis took a tour with his uncle on the aircraft carrier where the latter served in Vietnam.  There's a marked increase in quality as the series progresses, with the first issue containing some pretty amateurish art by David Beyer, Jr. and a "Mr. Alan" (and some quite nice work by T.J. Kirsch, who contributes to every issue here, and can be seen regularly illustrating the webcomic She Died in Terebonne), as well as several pieces in which Baylis awkwardly faces the readers and addresses them directly.  The second issue works much better, showing real development in storytelling skill, and some wonderfully cartoony art by Kirsch.

And then with the third issue, which only came out recently in Fall 2010, Baylis and company switch tacks entirely, telling a suite of fictional horror stories (making for a slightly confusing first story, which stars a Baylis lookalike who narrates a gruesome breakup tale) that effectively communicate a dark, creepy mood and atmosphere.  Beyer illustrates two stories here, and he has really grown since the first issue, lending a great deal of nastiness to what could be fairly rote vampire and zombie tales.  Kirsch is back for a lighter piece as well, rounding out what could either be a brief departure for the series or a bold new fictional direction.  Whatever the case, it's kind of fascinating to read these issues all in a row and see Baylis and pals hone their craft over a few years.  Hopefully, the wait for the next issue won't be as long.
----- 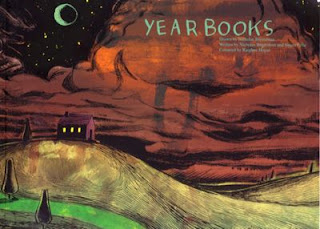 This isn't really a minicomic, but it kind of feels like one, having the feel of something personal and hand-crafted.  Nicholas Breutzman co-writes and draws an affecting story about a high school kid with an interest in art forming a sort of relationship with a teacher, and finding out that the man isn't the best role model.  The story is full of the awkwardness and intense emotions of the teen years, and it ends up being pretty sad, as the teacher, who seems interested in encouraging his students who show artistic talent, turns out to be something of a sociopath, demonstrating this through his cold, unfeeling attitude toward the subjects of the art that he shows off to his young charge.  There's a creepiness around this guy, leading to a somewhat expected scene between him and a female student, but it's not sensationalized, just something that happens.  In fact, the whole story seems to take the shape of a simple incident or memory, rather than an eventful bit of TV-ready drama. Sometimes things just happen, and we're left to puzzle over them for years, or, if we're the creative types, turn them into art.  Breutzman certainly put together something interesting, a small sliver of what seems to be a vibrant, realistic scene, one that lives beyond its pages.  It's unsettling and affecting, and certainly worth the time it takes to read.
Posted by Unknown at 11:12 PM